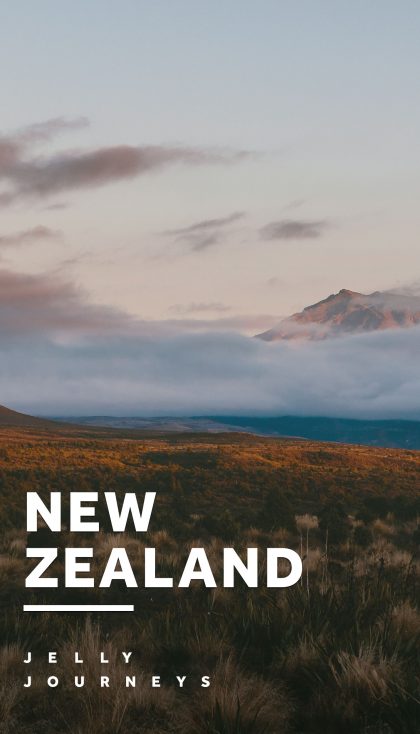 This post will outline all of the stops we made and advice we have, for a campervan trip throughout the North Island of New Zealand. Along with videos, we will also be doing posts for the South Island (coming soon).

Flying from Brisbane to Auckland (with a free upgrade to business class, might I add!) we naturally made our journey from the North to the South, across both main islands; exploring all the unbelievable scenery New Zealand has to offer.

Check out our video for New Zealand and subscribe to Joe’s YouTube channel to get updates for new releases!

We’d only loosely planned our road trip for New Zealand, as we weren’t sure on how much money we’d have left by the time we got there — a whopping 6 months after we left London! So we stayed in Auckland for a couple of nights to really organise what we wanted to explore and try and budget for the next few weeks.

There’s SO much to cover and with the three weeks that we had, we wanted to make the absolute most of it. We’ve literally never travelled to a country where we’ve been so desperate to see almost every acre of it possible.

New Zealand had a lot to live up to; and spoiler alert: it smashed it.

Before collecting our campervan from Mighty, we went into the city to speak with the very helpful staff at the DOC camping office in Auckland, which helped narrow down our options for what was possible and what the best route was to take.

We used Auckland as more of a place to catch up on admin, so we didn’t explore too much unfortunately. But to be honest, we weren’t in New Zealand for a city break. We’d already covered that in Hong Kong, Macau, Bangkok, Tokyo, Osaka, Melbourne, Sydney, Brisbane… you get the picture. 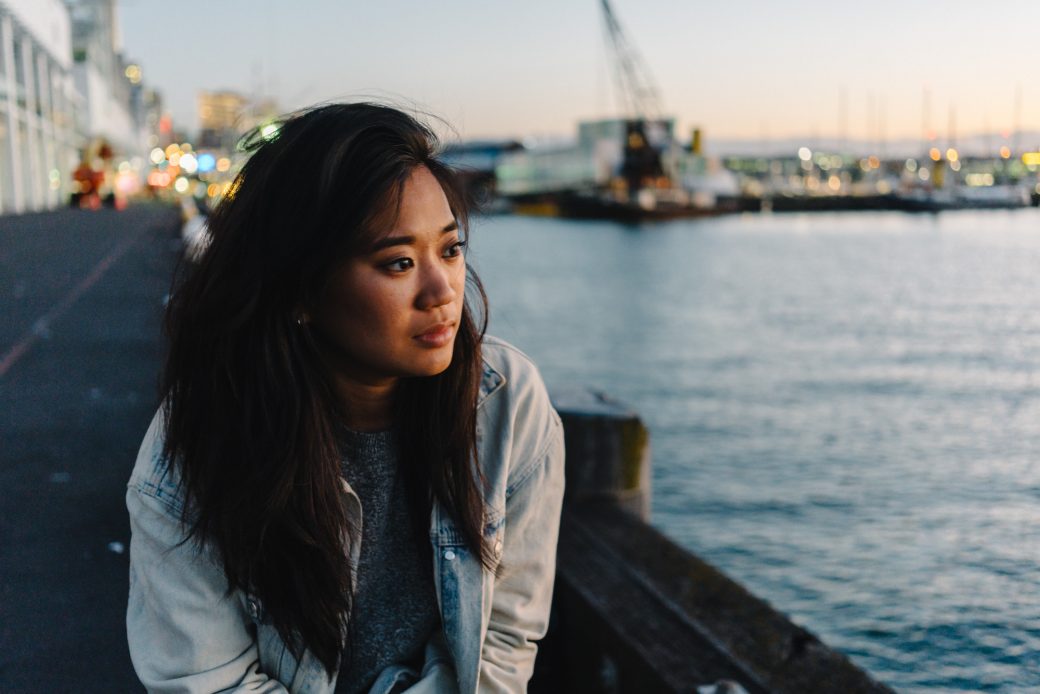 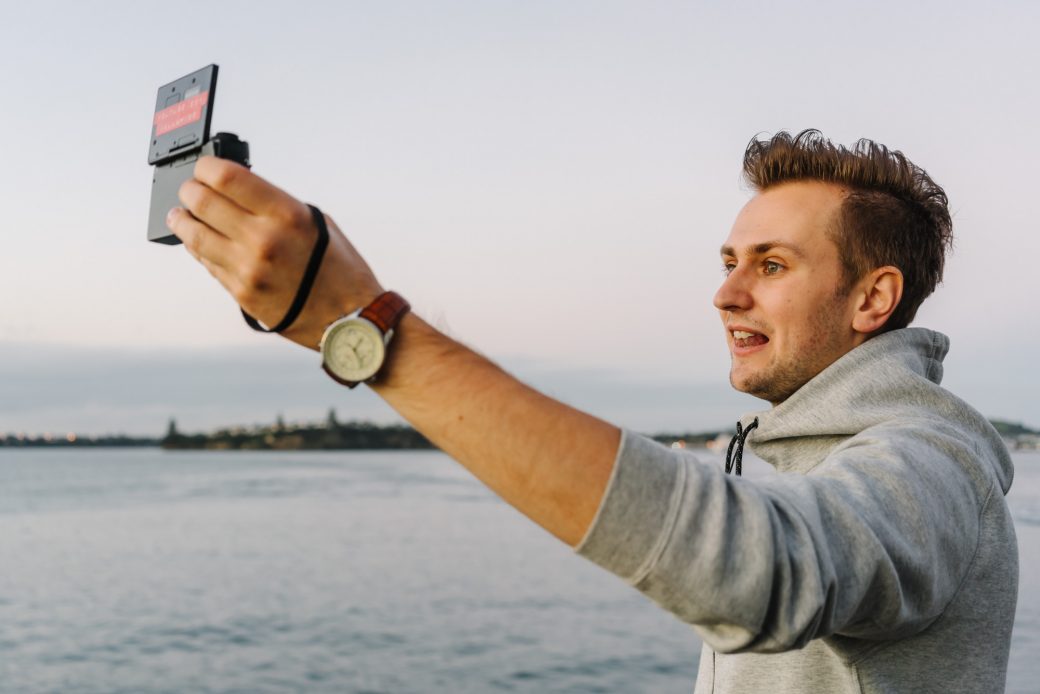 We were here for the mountains, lakes, glaciers and any other epic landscapes we could find! 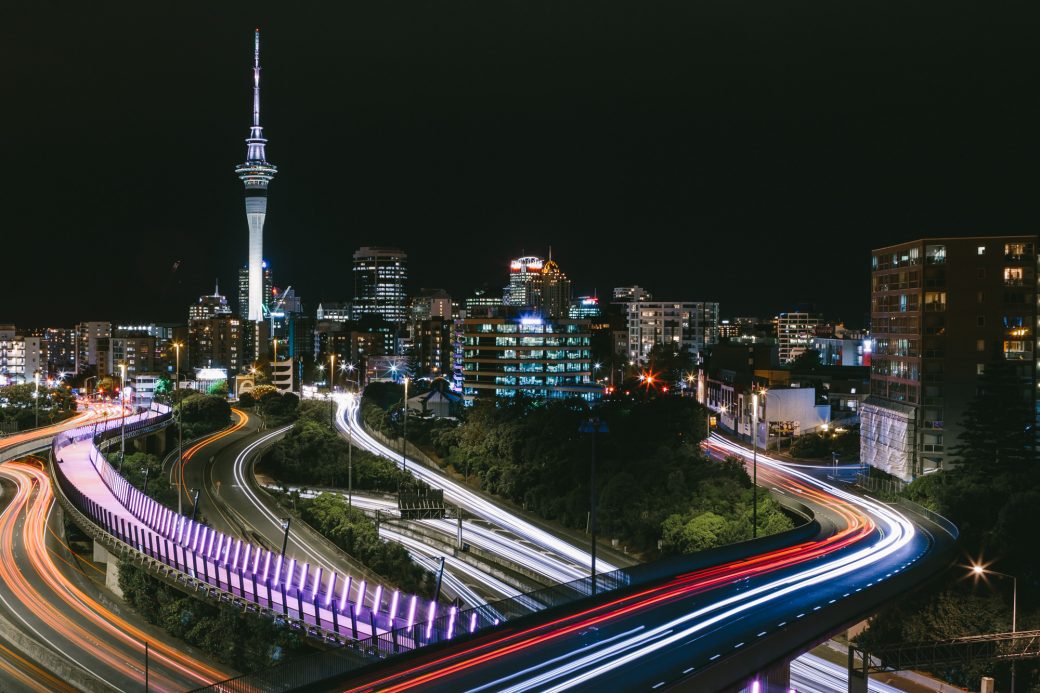 Long exposure shot out of the apartment we stayed in Auckland

I was personally quite nervous about driving the campervan and having to live in it for three weeks. But when we picked it up, we actually noticed that we got a few bonuses thrown in, such as a TomTom sat-nav, outdoor furniture and toilet cleaning products that you would normally need to pay for.

The staff at Mighty kept telling us that most people only book a campervan for about 3-7 days, not three weeks! So I think that’s why they gave us extra things, which we were so grateful for.

Having the TomTom saved us big time. Phone signal in New Zealand is petty much non-existent, especially when driving in the mountains, so having a satellite connection for directions was super handy!

We did also make sure we grabbed loads of maps from the DOC office though, as we knew we couldn’t rely on Google Maps on our phones.

Another thing we wished we could have had, was an auxiliary port on our stereo. Unfortunately, the camper we had didn’t have any way of playing music other than from CDs, so I had to use my phone speaker which obviously isn’t good for battery life.

To add insult to injury you barely get signal for the radio. Even when you’re driving through some of the towns… 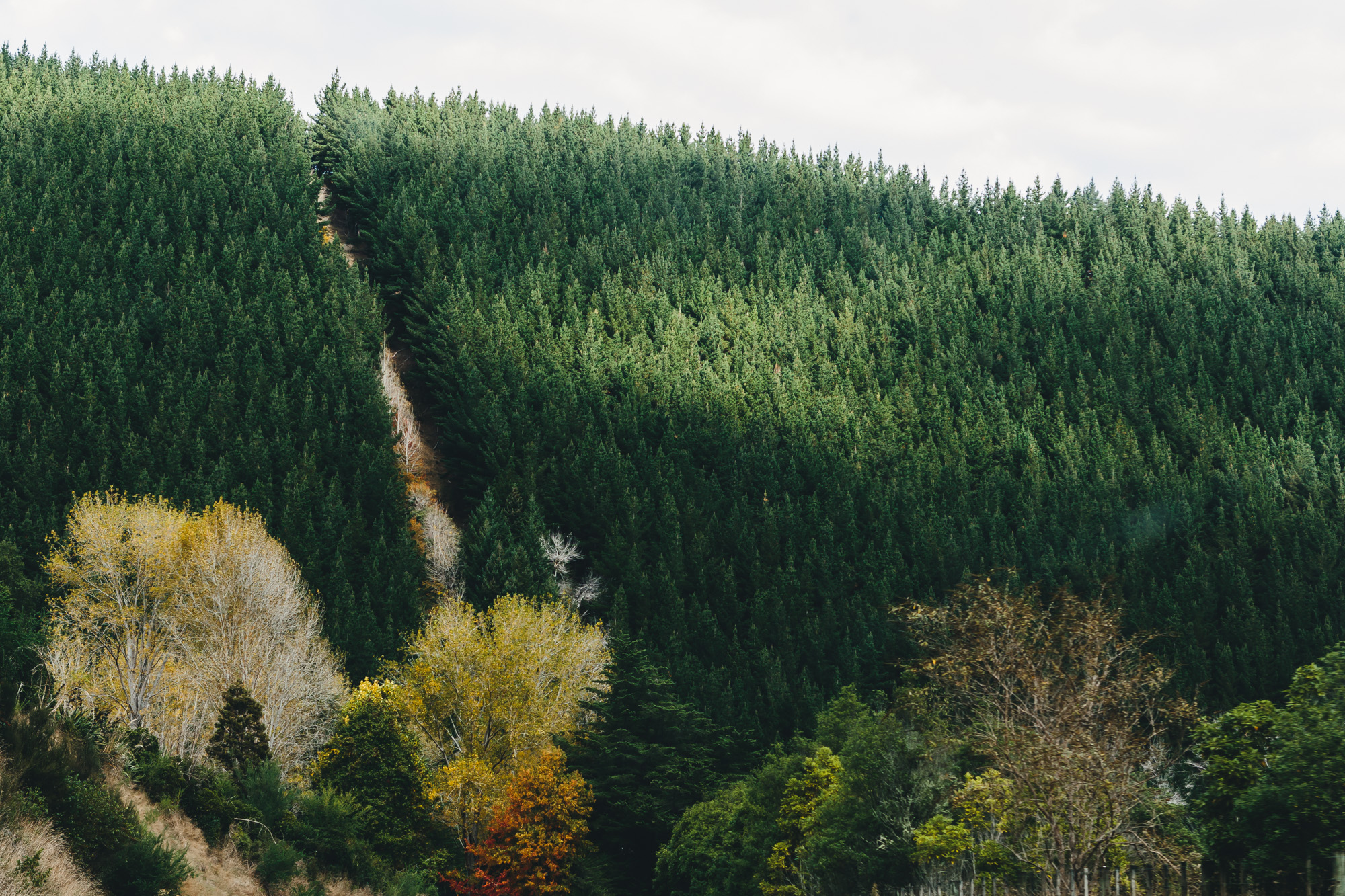 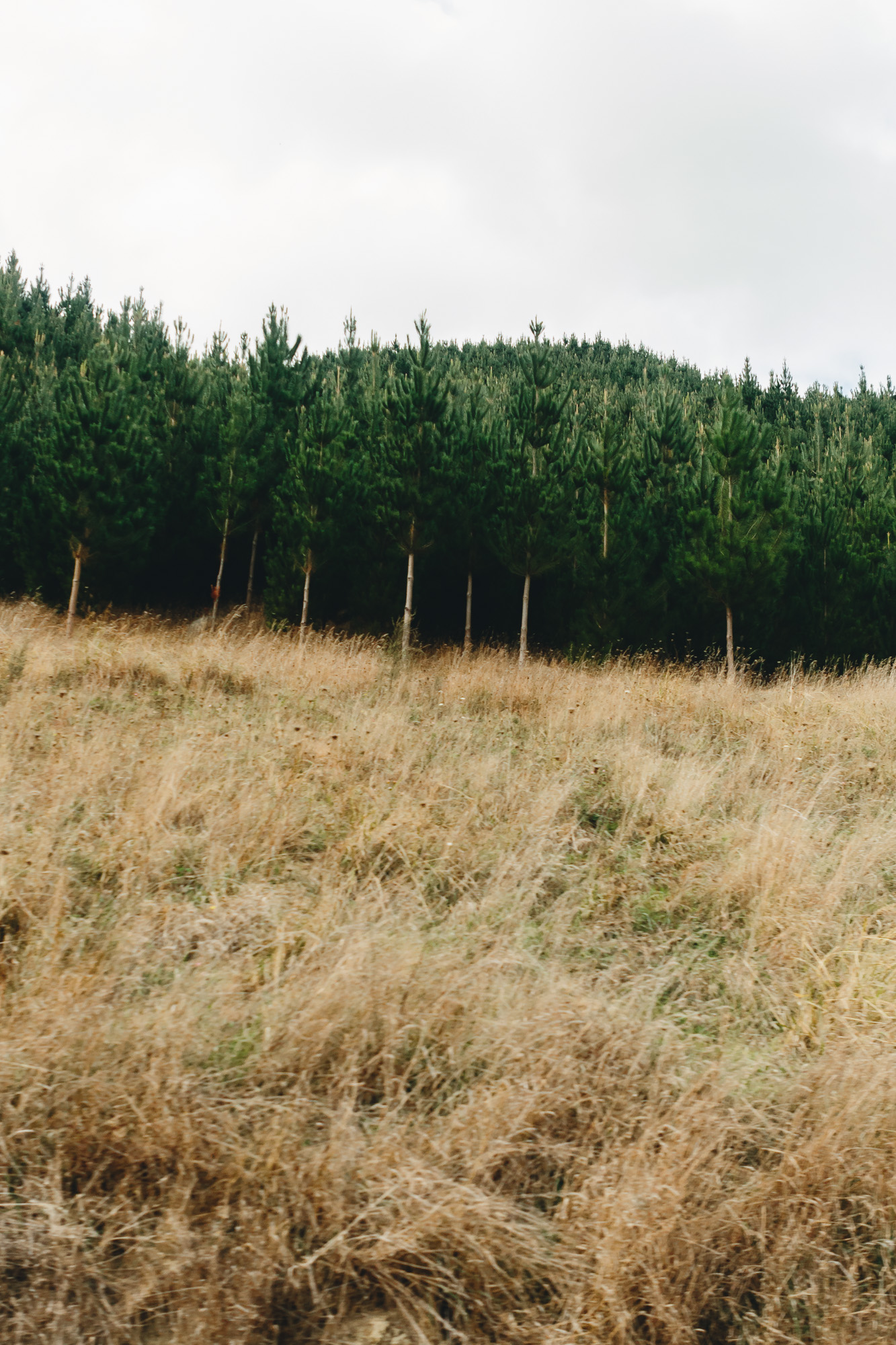 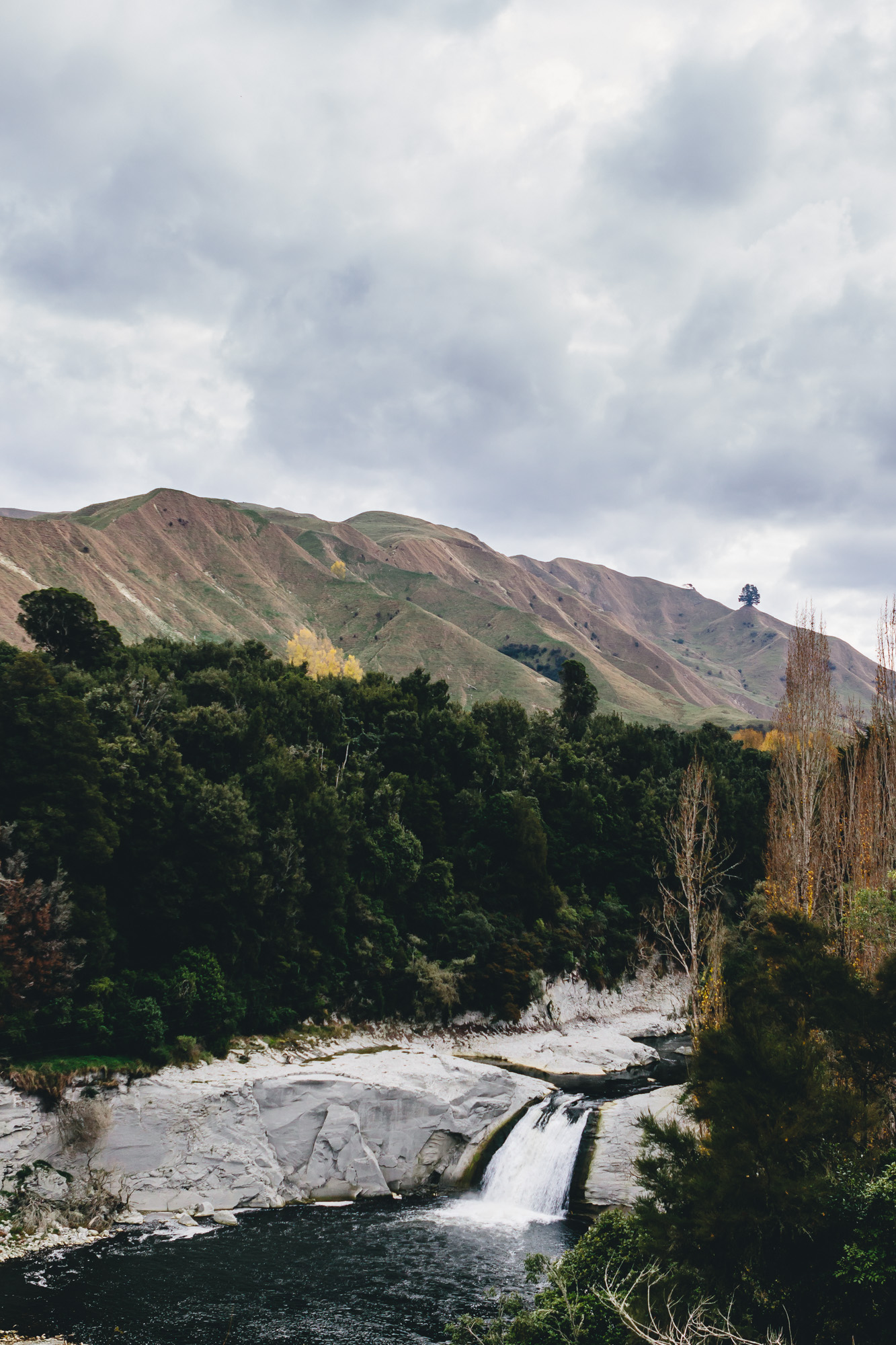 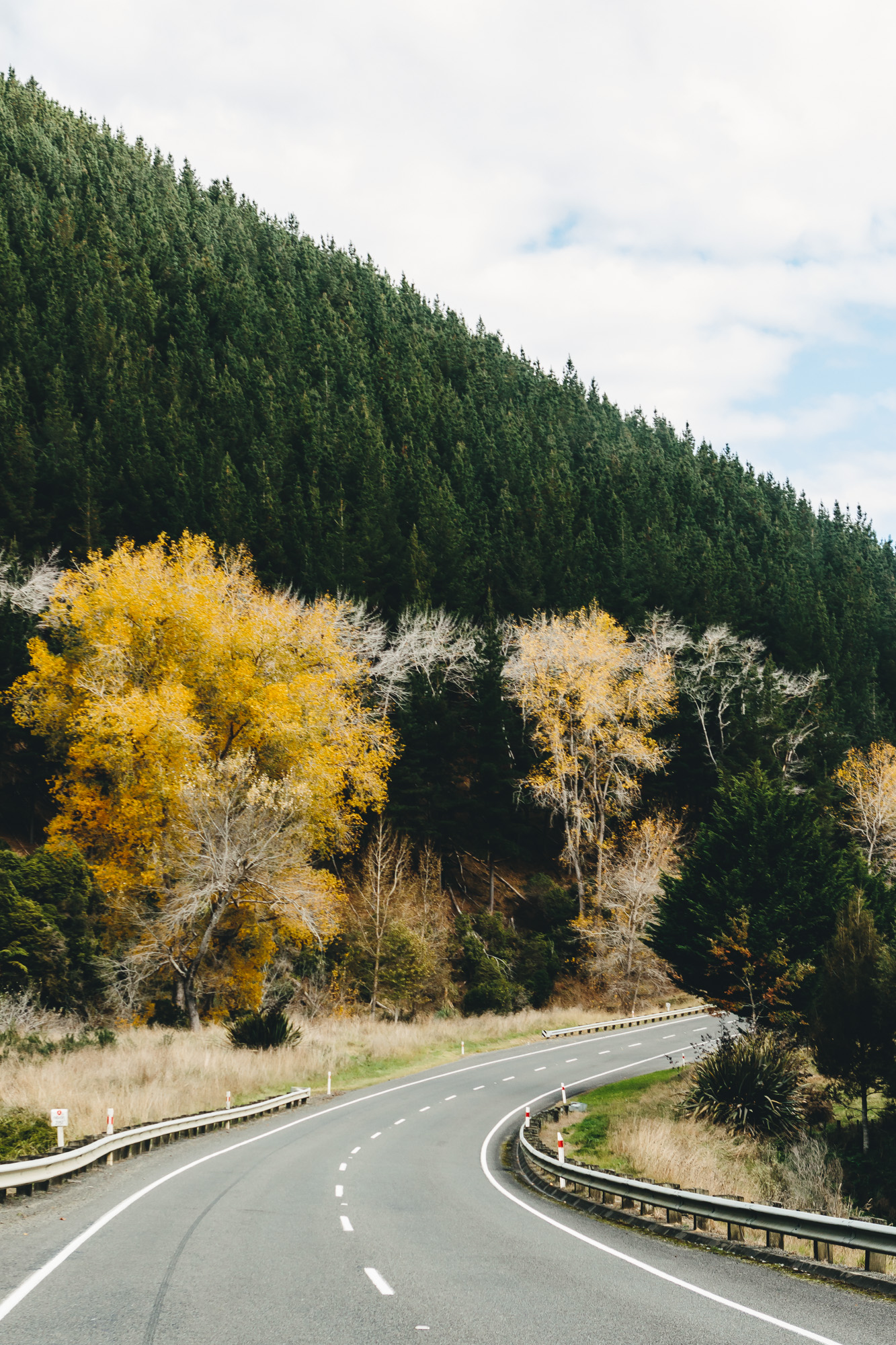 Joe offered to drive the camper first as I mentioned that I was nervous and I would have preferred to test it on the open roads and not in the city. It was the largest vehicle either of us had driven, after all.

The campervan we hired was the Double Up – 4 Berth Campervan and it was pretty massive, although we did get comfortable driving it fairly quickly.

Before we set off for the long first drive, we made sure to stop off at the supermarket to stock up on food and off we went! 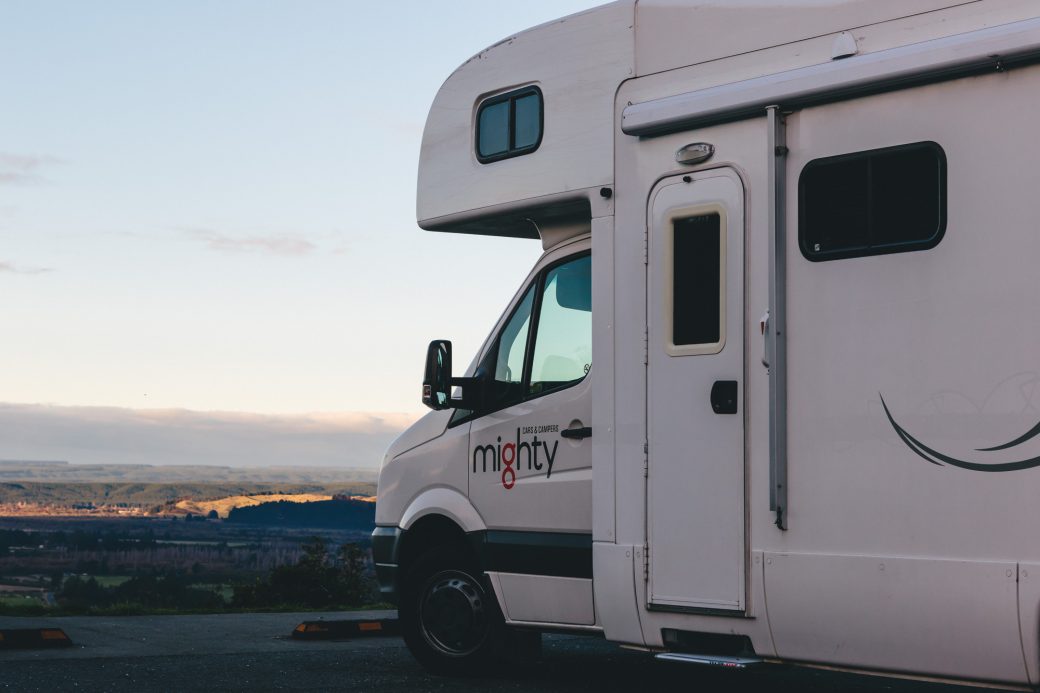 Our first destination was over at Hot Water Beach, which was actually something I saw in a vlog from FunForLouis’ a few months back. It’s a beach at Mercury bay along the east coast of Coromandel Peninsula.

But, it has a hidden secret. If you dig up the sand along a certain stretch of the beach that covers the natural spring, hot water will filter through! You can dig yourself a little pool which essentially becomes a makeshift hot tub!

We got there at around sunset and so it was quite dark by the time we were actually sat on the beach, so we couldn’t really get any photos or video unfortunately.

We both also scolded our feet about 2 minutes apart, from stepping into a hidden puddle that was literally boiling—be careful!

It was a one of most memorable evenings throughout our whole trip, as it was such a fun experience and we even saw multiple shooting stars!

Staying at the Hot Water Beach Top 10 Holiday Park eased us into campervan life. Sleeping in the campervan was really comfortable as it’s pretty spacious at the top and we adjusted really quickly.

On our second day, we drove towards the Tongariro National Park via a quick stop at Lake Taupo and Huka falls. Yes, the water in New Zealand is naturally ridiculously blue. You wait til we show the photos from a place called ‘Blue Pools’ in the South Island… 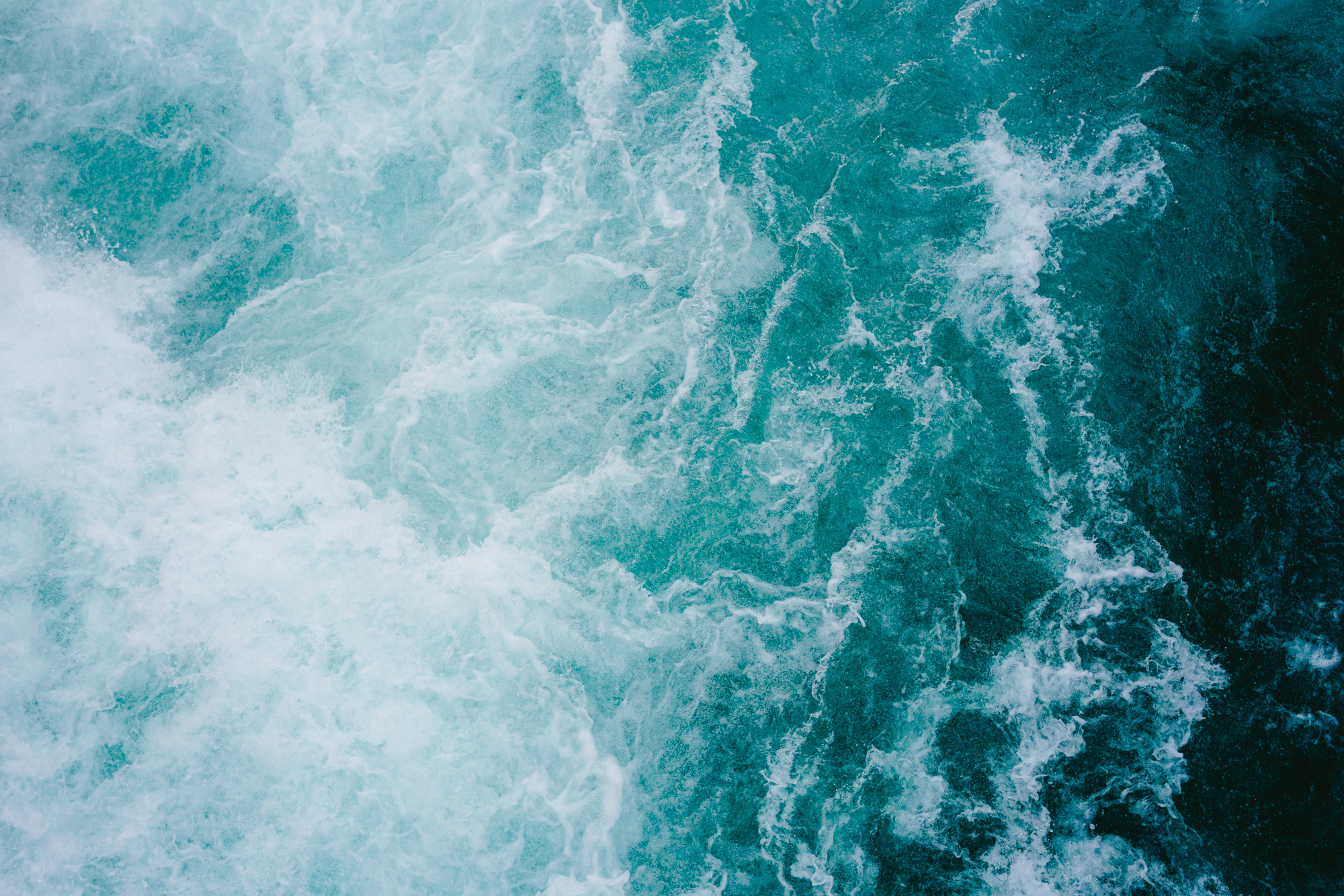 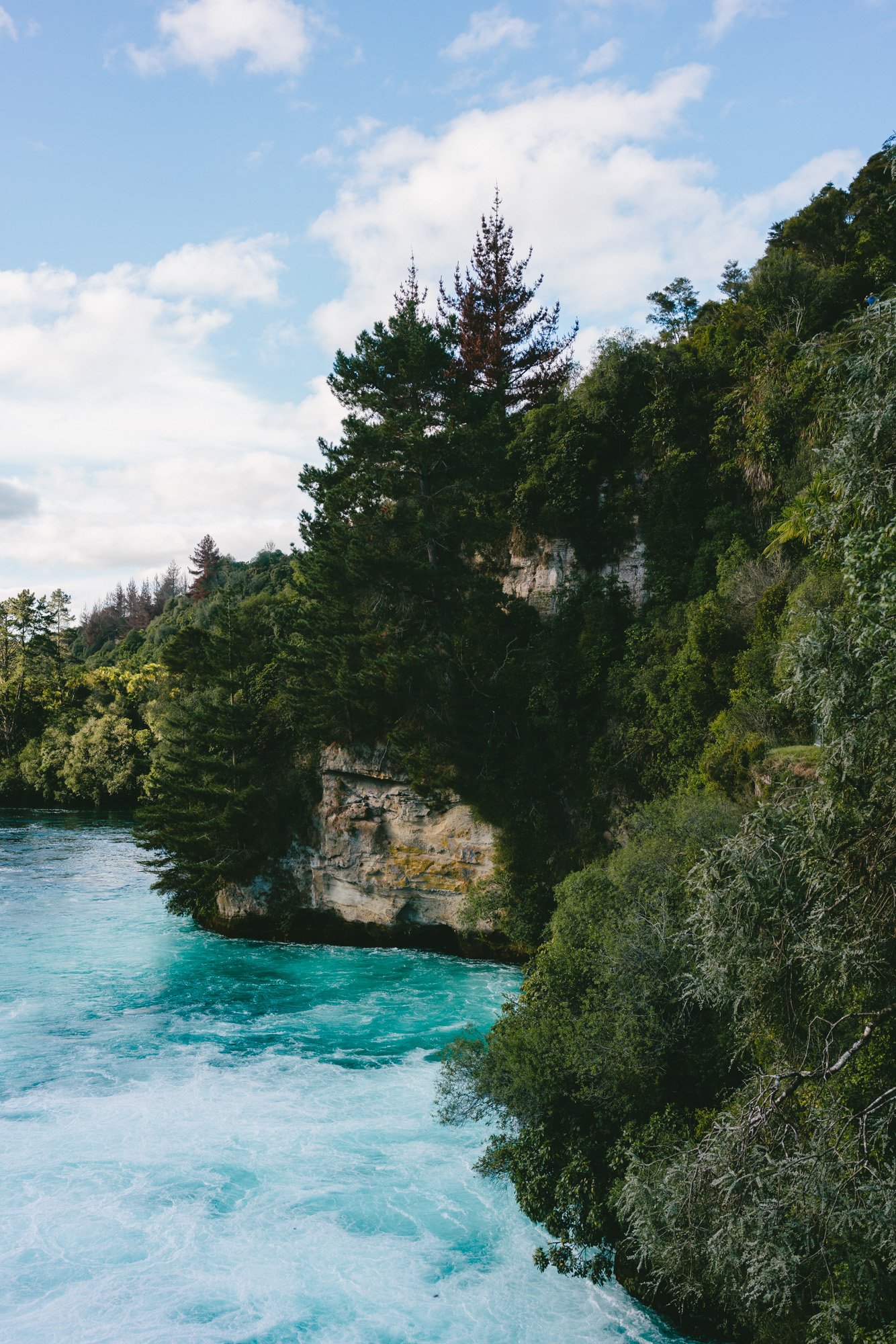 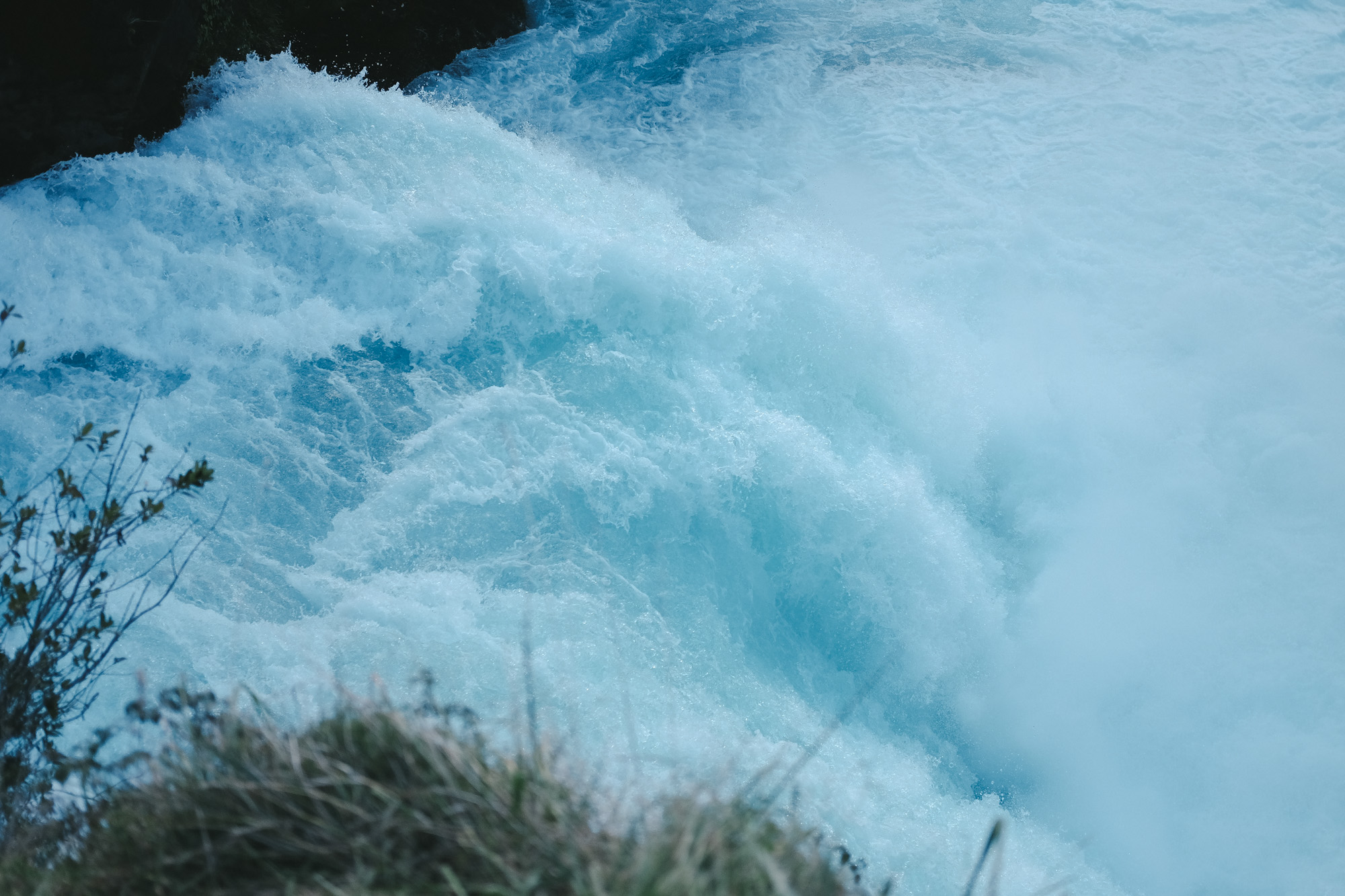 On our route to Whakapapa Holiday Park (pronounced “fakapapa… who knew?), the sunset through the Tongariro Crossing was pretty spectacular.

This was the first time experiencing New Zealand mountains in its full beauty; and the sunset with the low clouds made it even more magical. 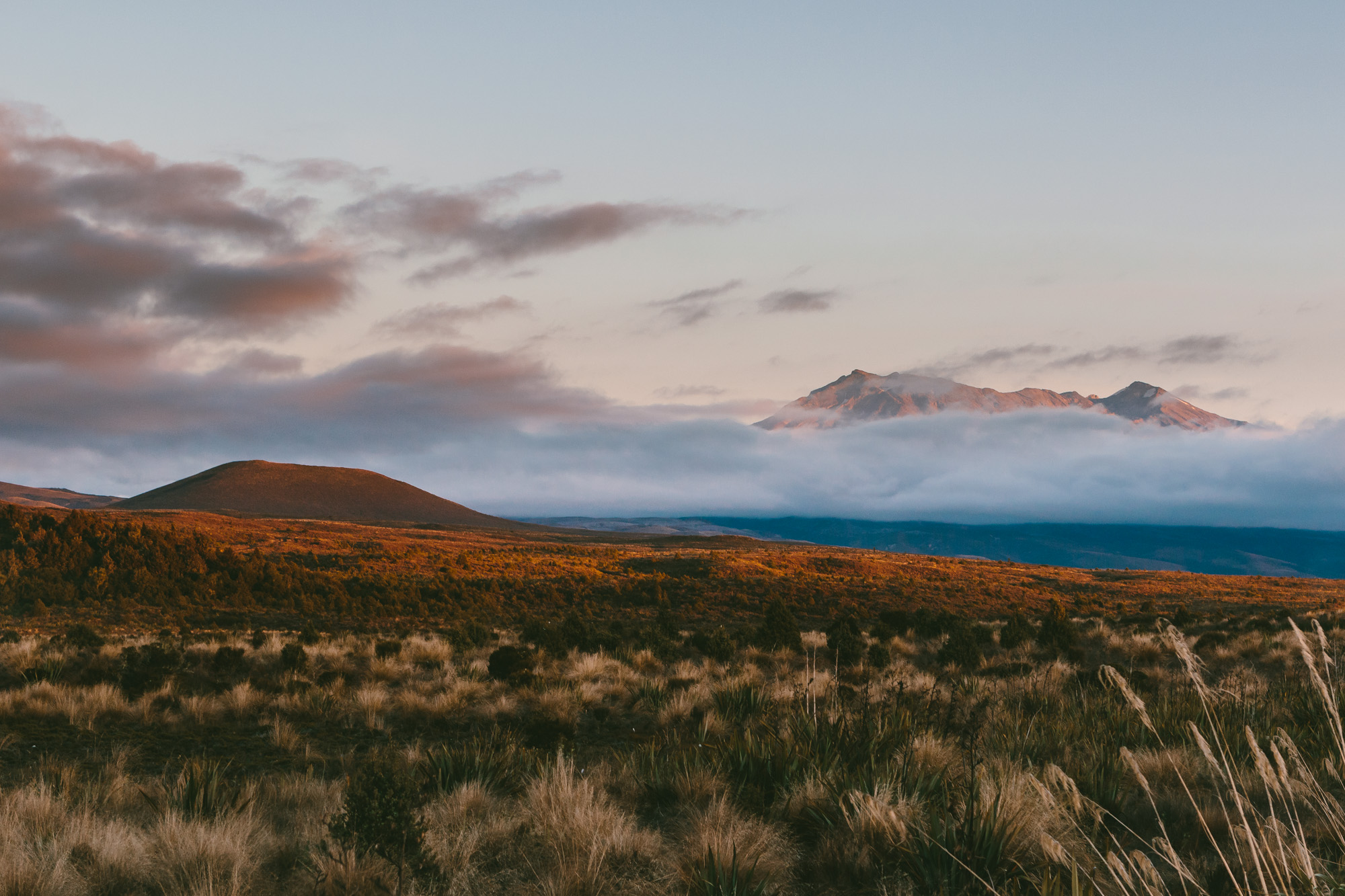 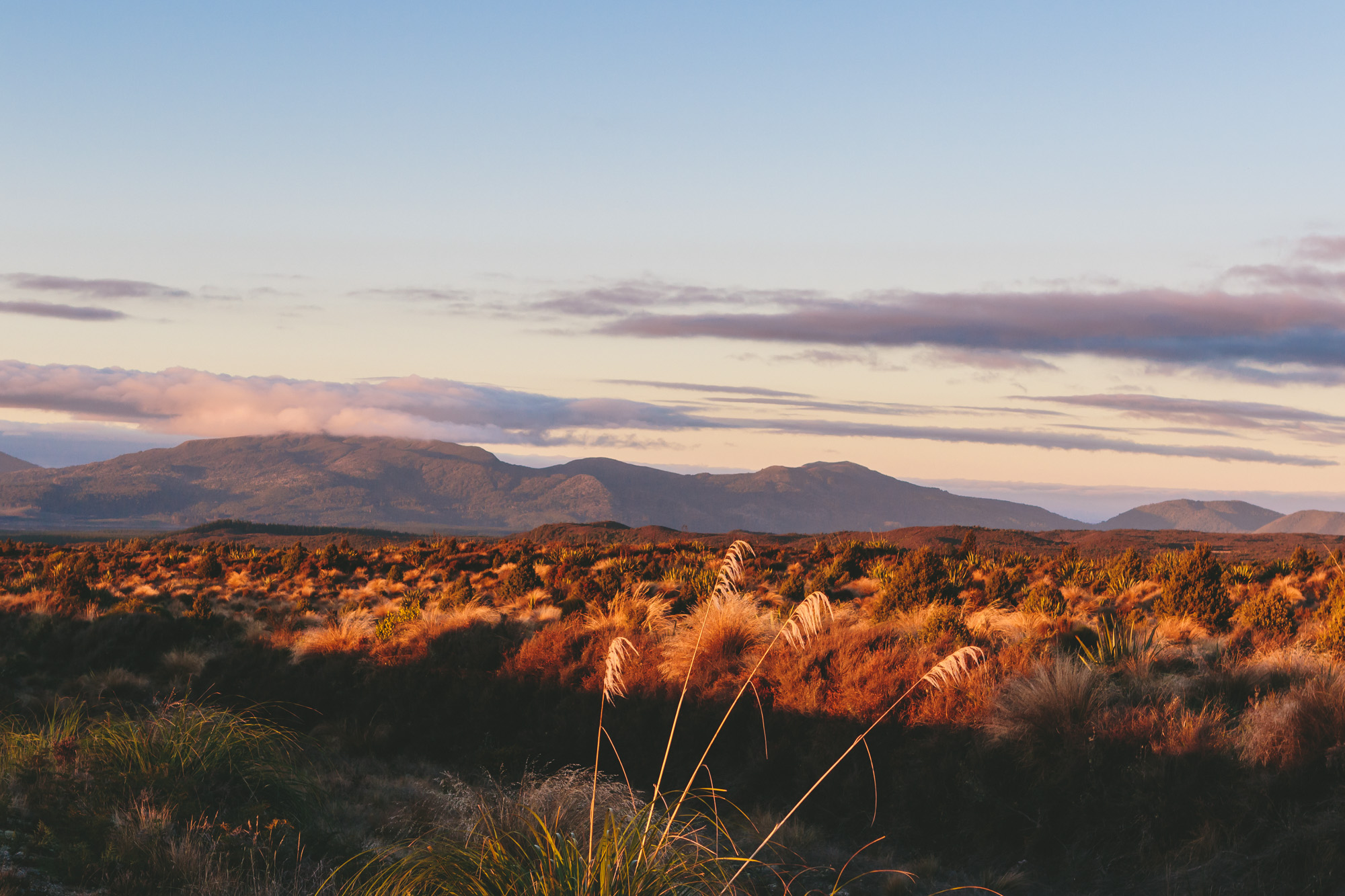 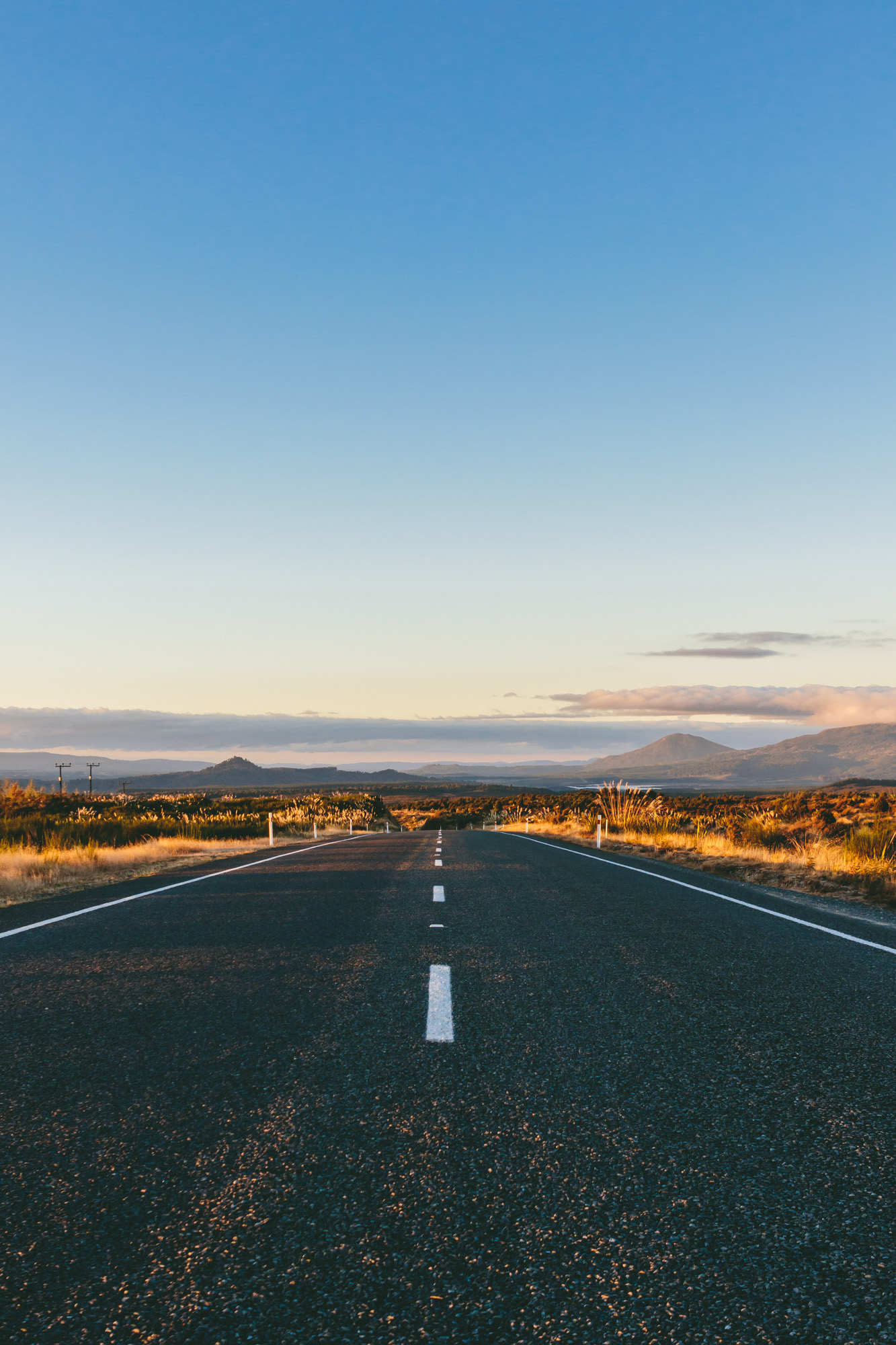 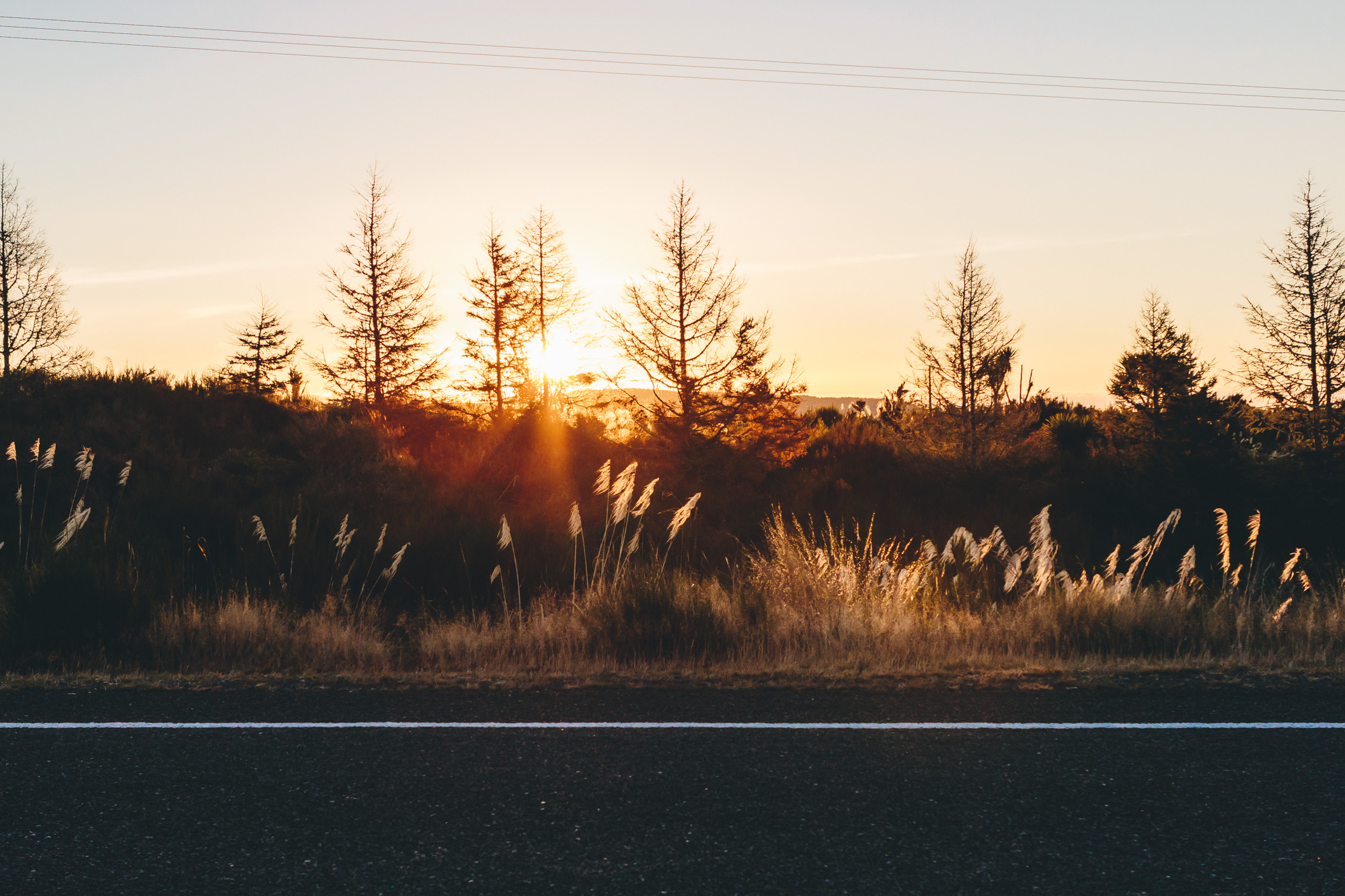 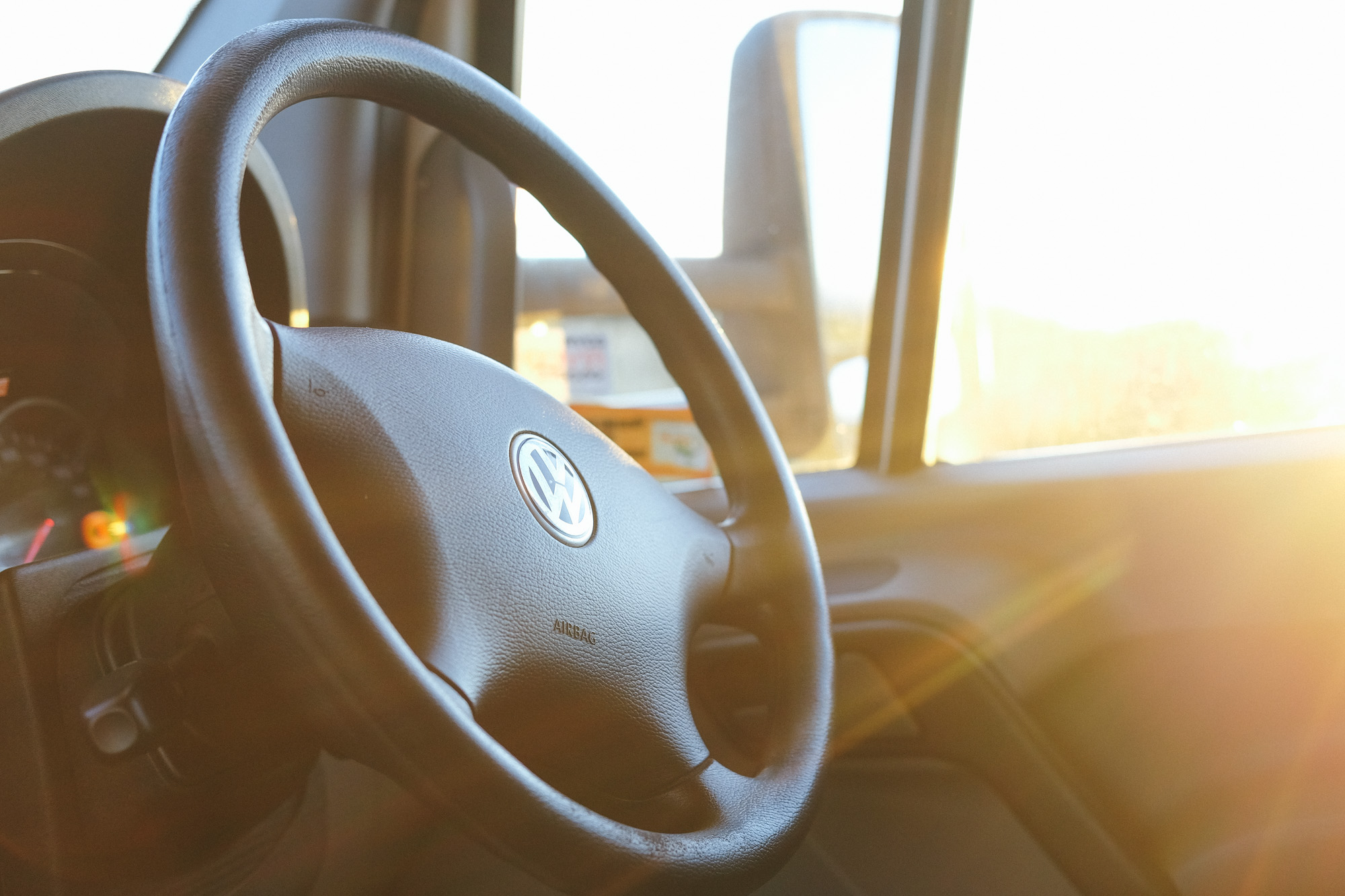 We had a brief walk around a ridge walk in Tongariro National park, which was close to our campsite, before setting off for a few hours drive further south to Whanganui (also pronounced “fanganui”).

We hadn’t really planned too much for the North Island, so we used our time to plan what we wanted to do for the South Island with all the mountains! 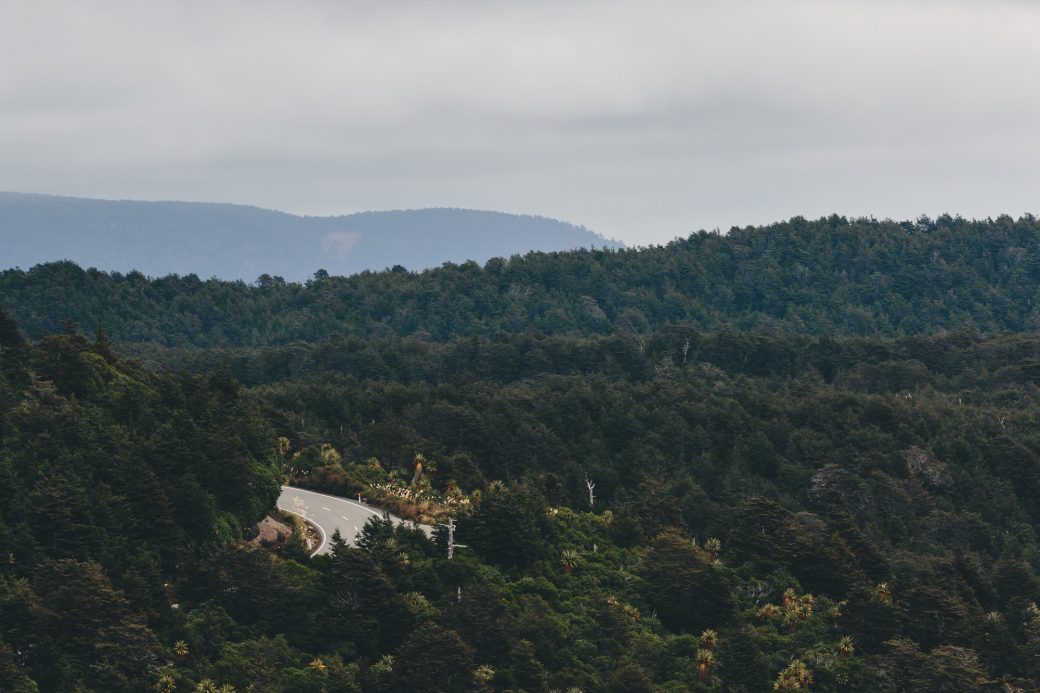 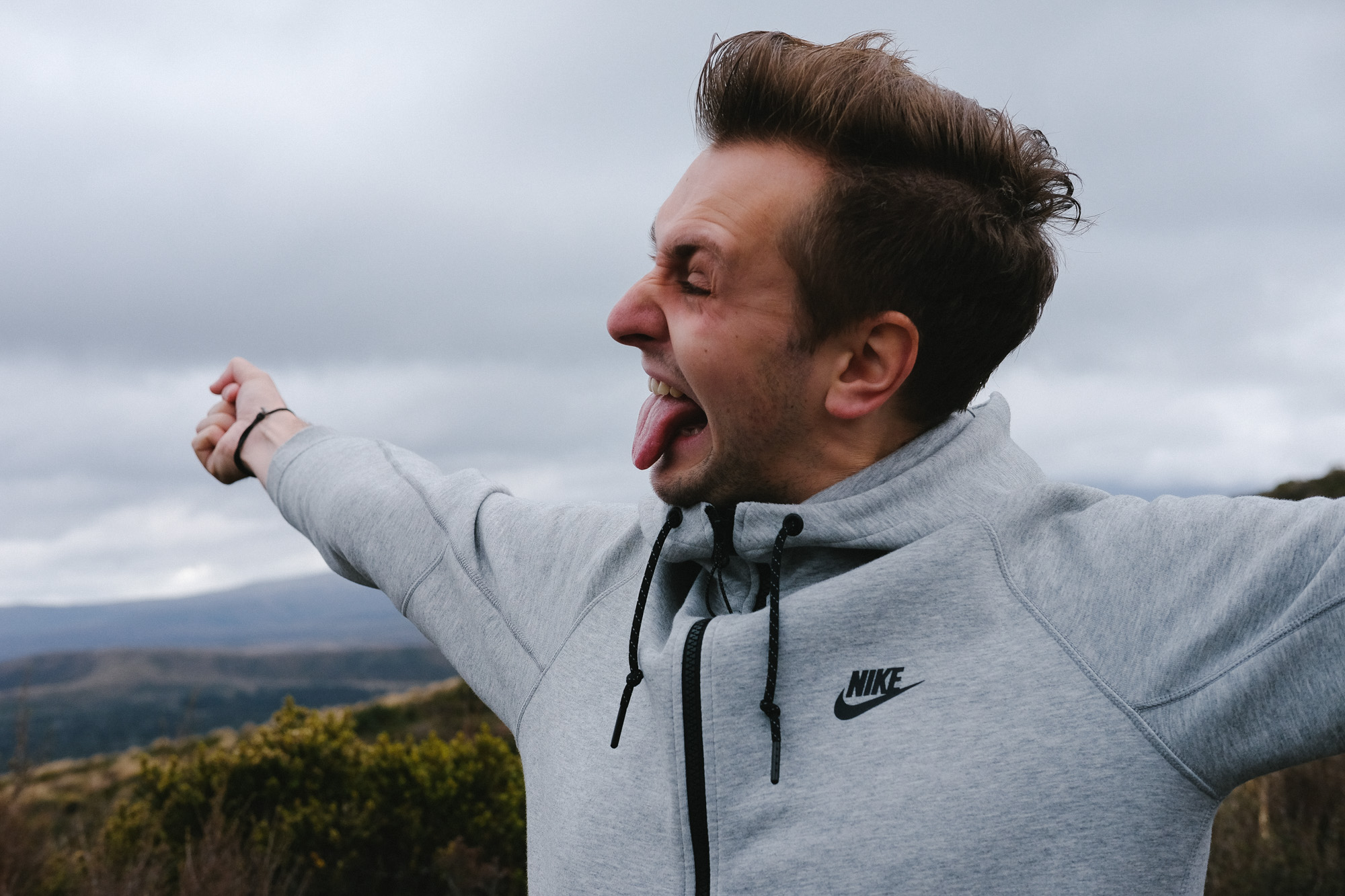 We found an iSite Visitor Centre with wifi in Whanganui, which was actually the best one we went to out of our whole trip. It was pretty useful to research other places to go and we even submitted our applications for our Australia visas from here.

With the light fading, we drove off to Himatangi to stay at the Himatangi Beach Holiday Park. We managed to catch another amazing sunset on the beach, before we settled into the night in the park.

We have to say, the Himatangi Beach Holiday Park was one of our absolute favourite places to stay! It was SO clean with great facilities and it’s owned by a really friendly family, who made us feel really accommodated. 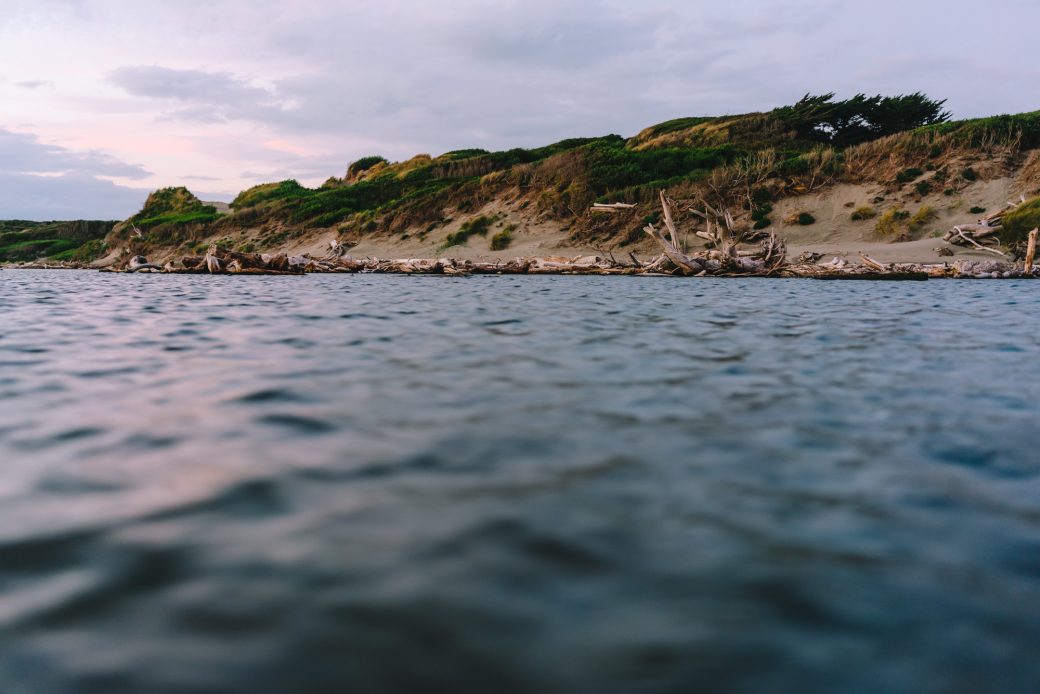 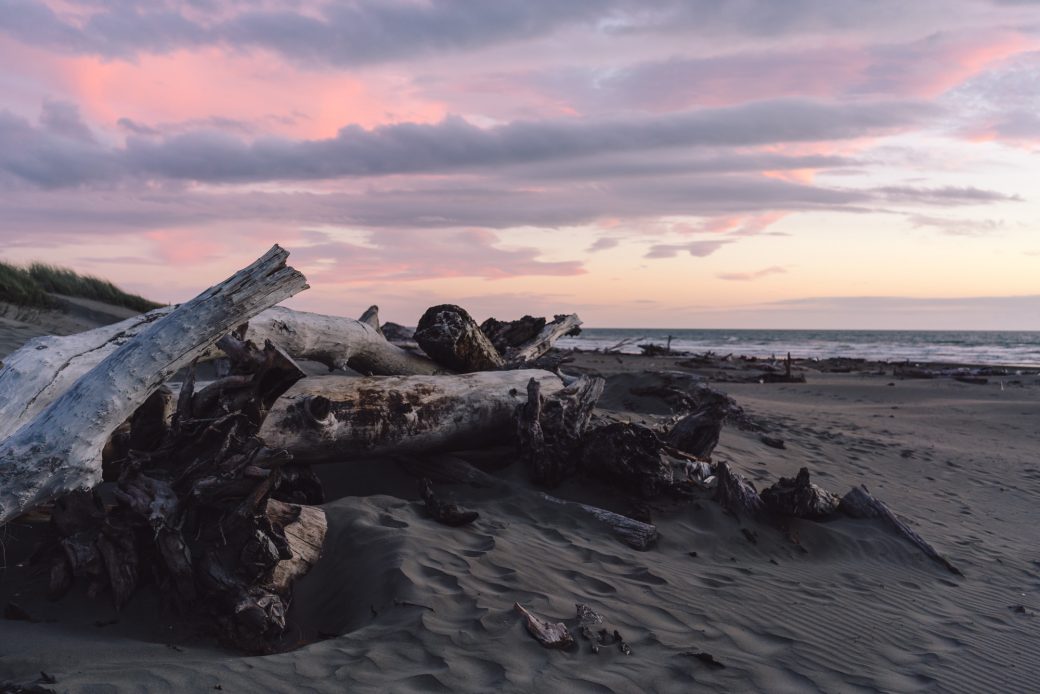 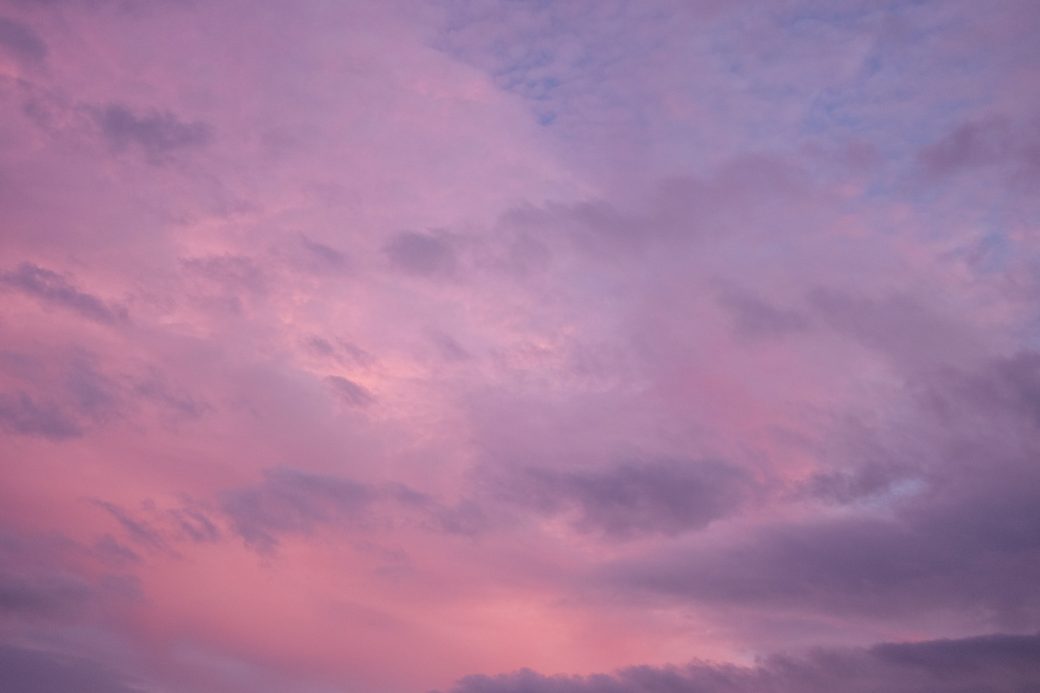 Instead of driving all the way to Wellington and spending two consecutive nights without a power hookup, or paying the overpriced fees of campsites in the city, we decided to stay at Camp Elsdon in Porirua.

Useful fact: If you’re looking for free wifi, the CBD of Porirua has the fastest free access in the whole country with a gigabit connection!

Knowing that we’d get free showers and a power connection—which is recommended at least every other day, to keep the fridge and lighting batteries charged—we knew it was a good idea, just incase it was even longer until we’d get power again in the South Island.

Our drive to Wellington was short and sweet, so we were able to have a whole day there and get an early night for our ferry in the morning. We parked up at one of the DOC campsites, Evans Bay Freedom Camping, which is essentially a car park, and walked into Wellington’s city centre.

We managed to grab a slice of pizza and a coffee while exploring a bit of city, however we mostly ended up working in the Wellington Library. We knew we wanted to plan some cool activities for the South Island, so we had a lot to research and tonnes of leaflets to wade through!

After a windy overnight stay in Wellington, we set off on the Bluebridge ferry to the South Island! 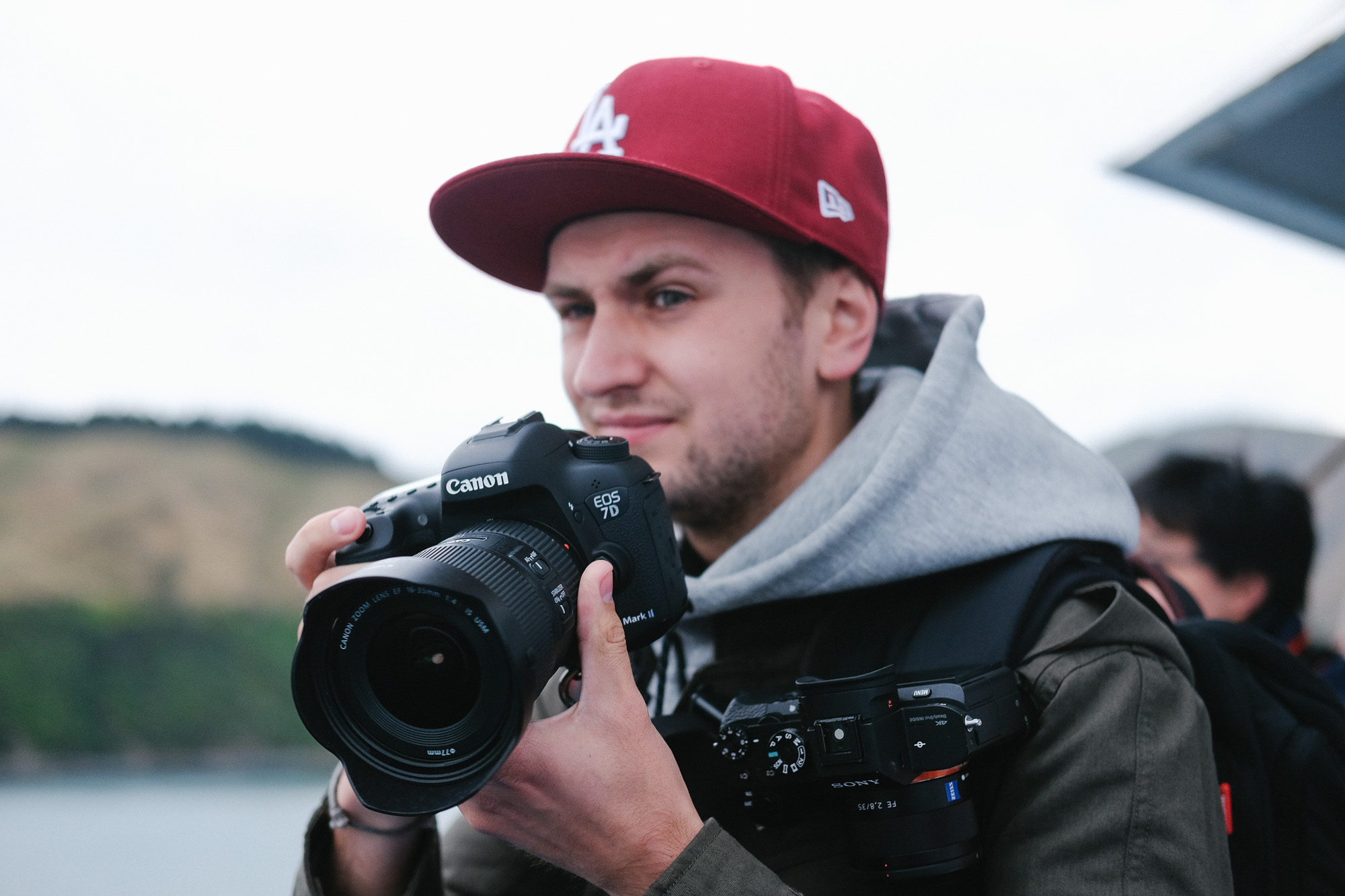 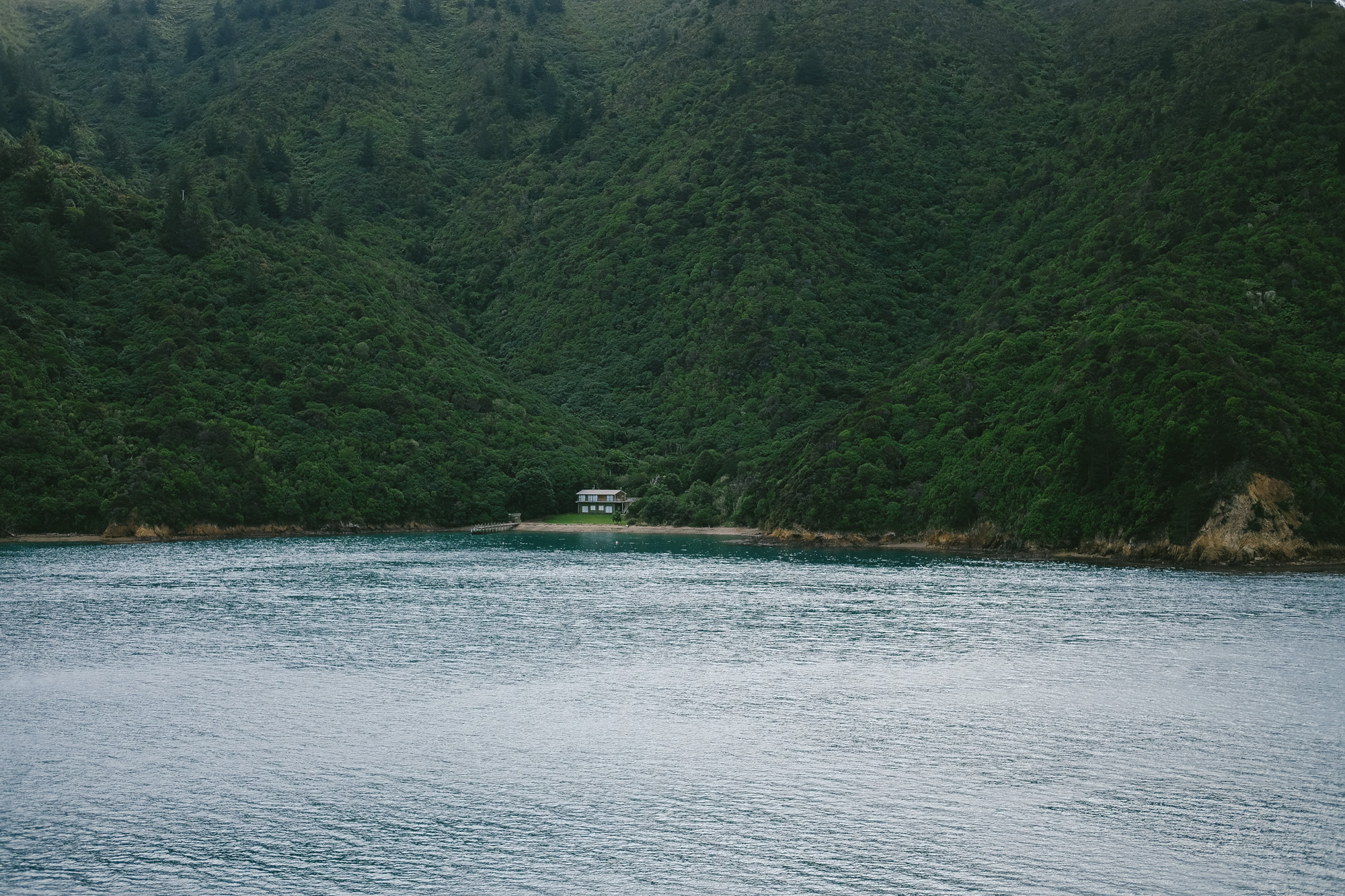 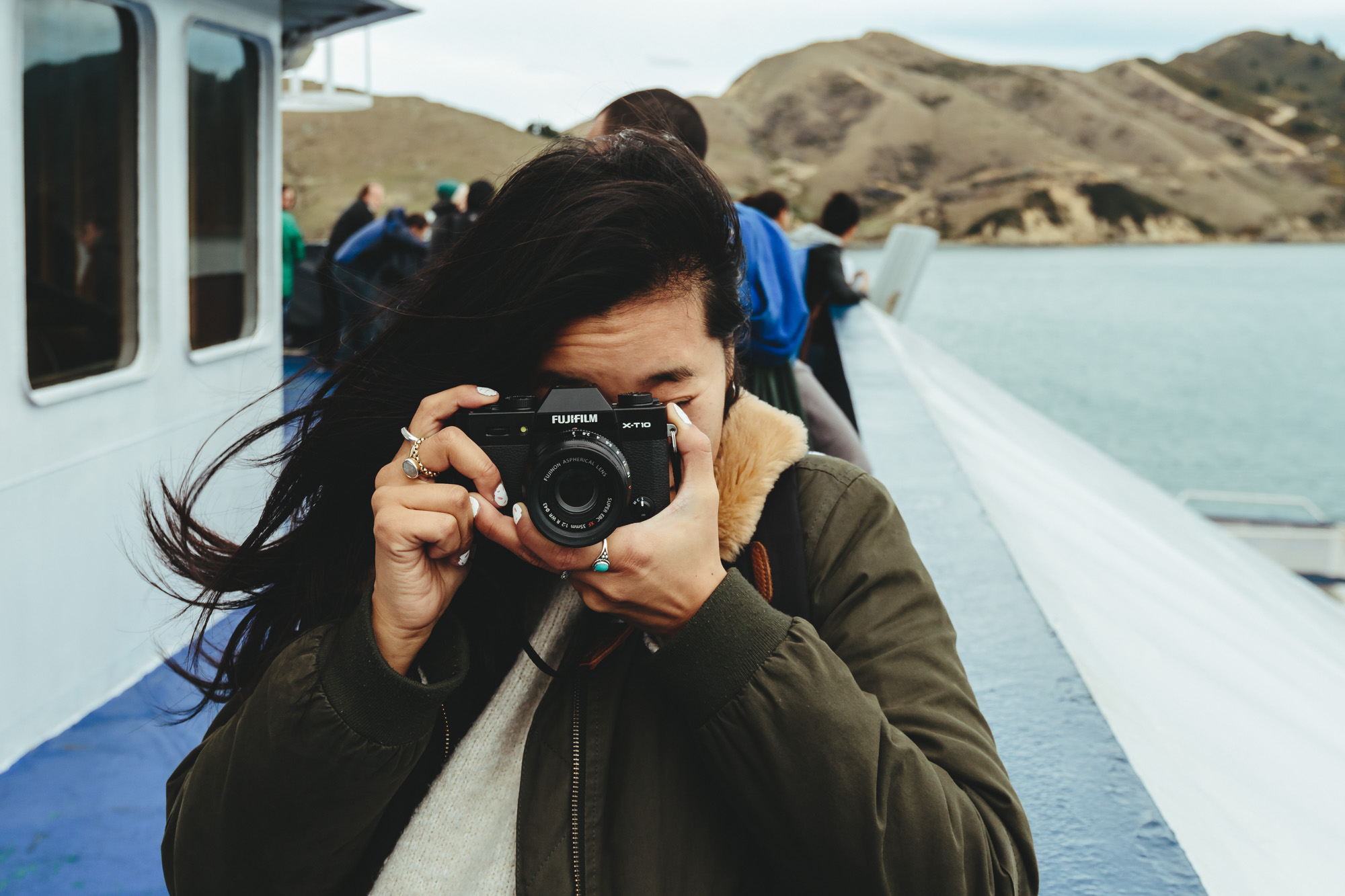 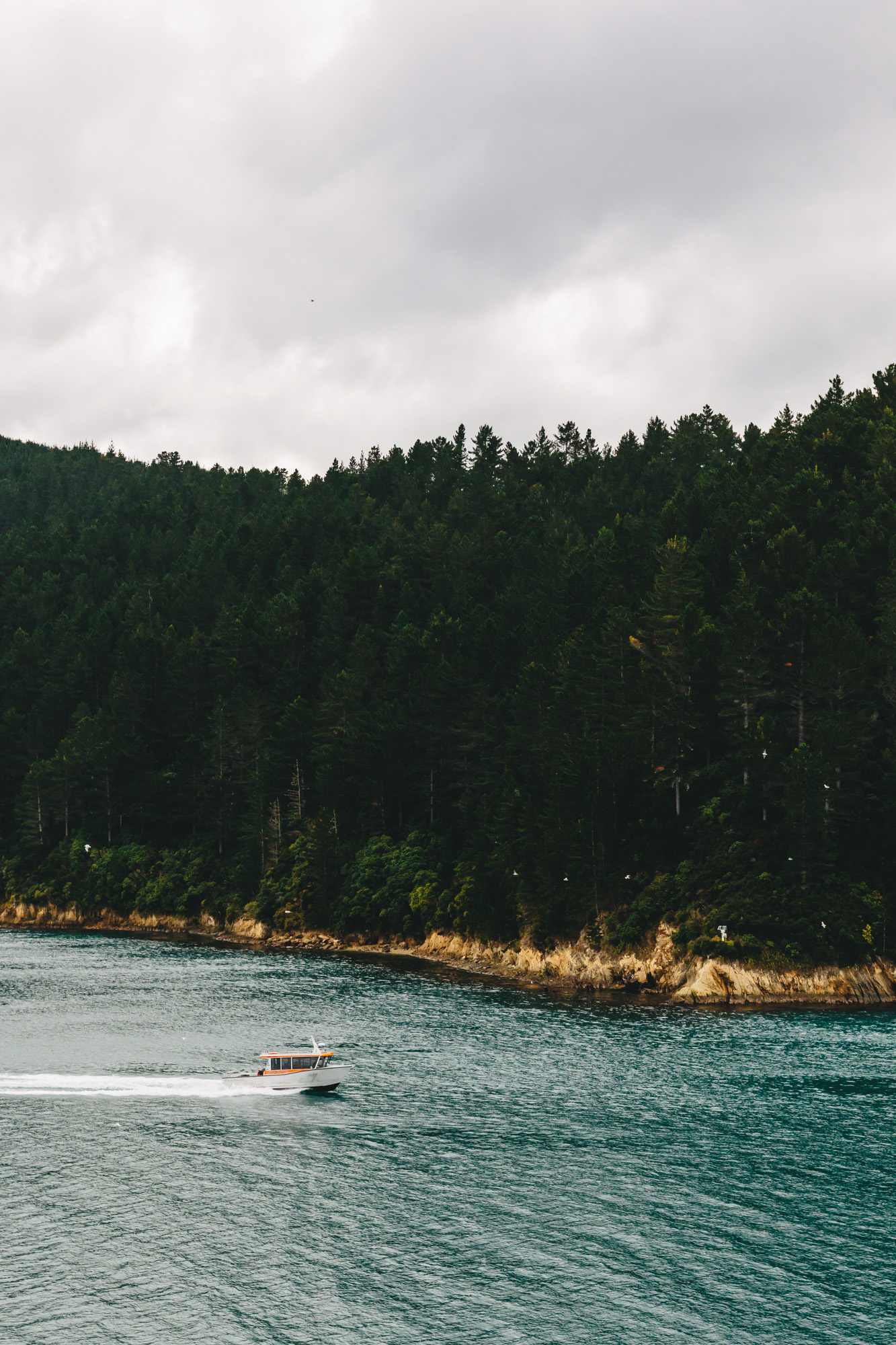 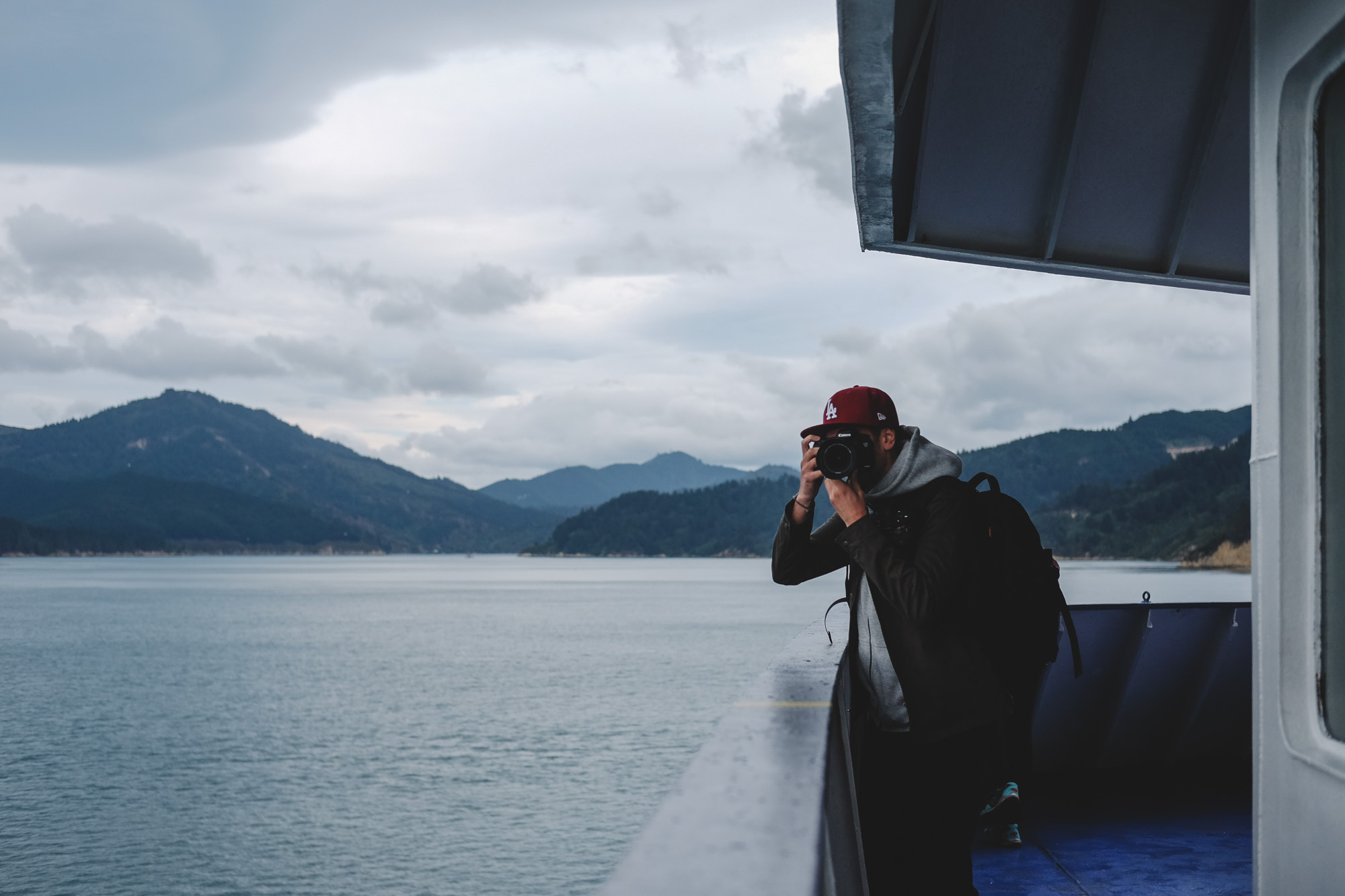 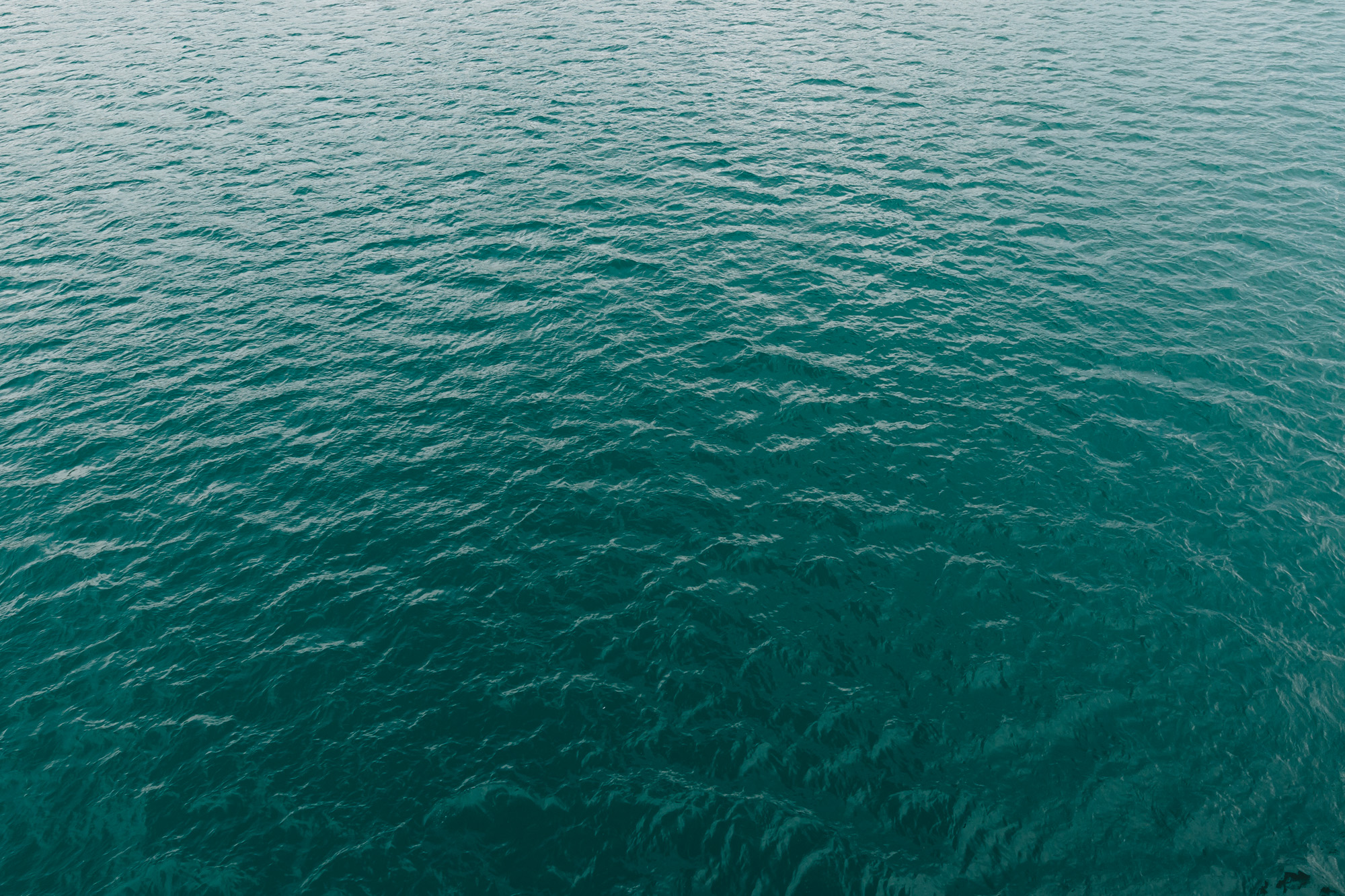 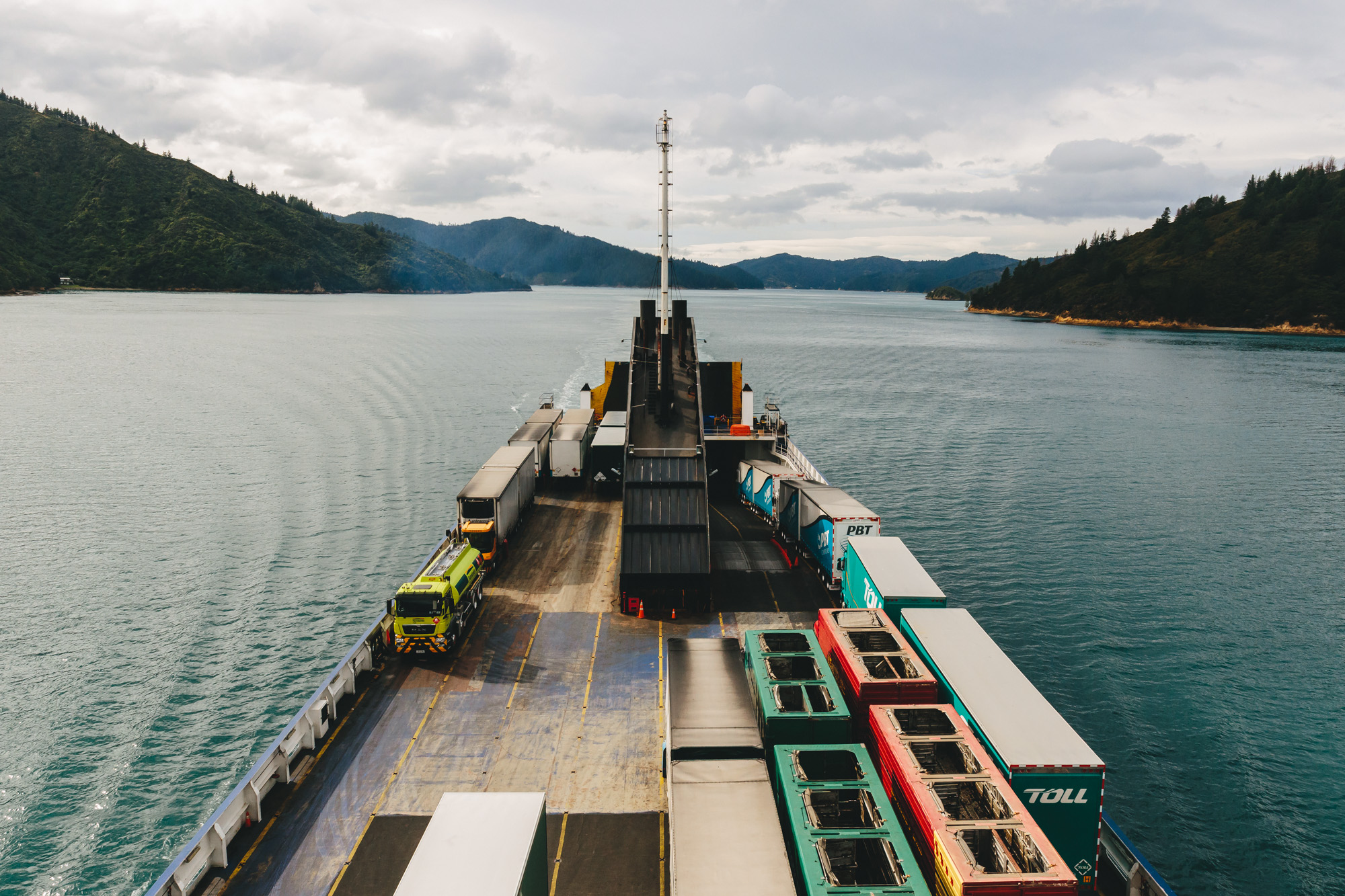 The ferry journey was pretty peaceful and took a few hours; but the scenery as we came into the South Island was on another level!

With the landscape rising up out of the blue water, we knew we were in for something special over the coming weeks…

Read on for the second part of our epic road trip across New Zealand, when we reached the South Island!

The third and final part of our epic road trip across New Zealand, includes some incredible activities in Queenstown and the surrounding areas!

How to Road Trip Across New Zealand

If you’re looking to do your own road trip across New Zealand, check out our full itinerary, complete with a map and top tips for a campervan road trip!

Thanks for reading! Check back next week for our next post and video of our adventures around the South Island of New Zealand and subscribe to Joe’s YouTube channel to get the latest updates as they happen!