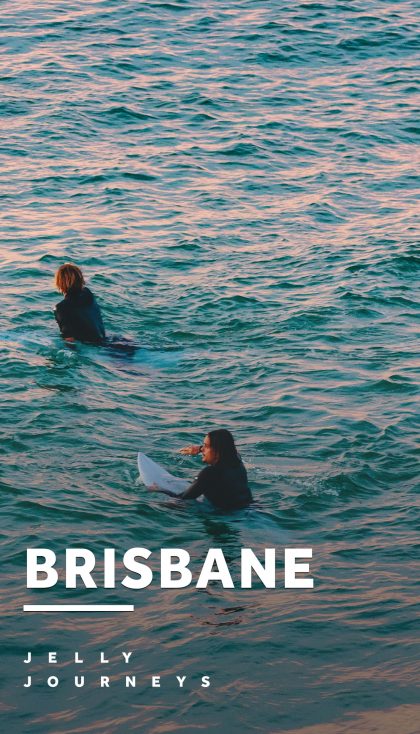 For the third leg of our Australia road trip, we drove from Sydney all the way up to Brisbane, stopping at Newcastle, Coffs Harbour, Byron Bay, Gold Coast and finally Brisbane.

We vlogged our whole trip in Australia as a 3 part series, so make sure you check out the posts from Melbourne and Sydney and then carry on for the third one below! You can also subscribe to Joe’s YouTube channel so you don’t miss out on the next vide releases!

Part I: The Great Ocean Road and Melbourne

Follow our road trip within a road trip as we visit the Great Ocean road and continue on to Sydney.

Our first stop, Newcastle; was a quick night in a shared Airbnb. We caught up on editing loads of photos for Instagram as well as finally beginning to catch up with editing some videos. We were working on the Thailand one at this stage, if you’re interested.

Our night was reaaallly comfortable, and our host was incredibly friendly. It was literally like staying over at a friend’s parent’s house. He even printed out a map of Australia and hand-wrote all of his favourite coffee shops in the areas we would be visiting!

In the morning, we made a little detour to Nobby’s Beach before trying to carry on to Nelson’s bay. But it chucked it down so much, that we decided to go straight onto Coffs Harbour and skip the second beach.

We pretty much just stopped driving at one point, to let the rain pass.

It was honestly so bad, we could barely see anything out the window. 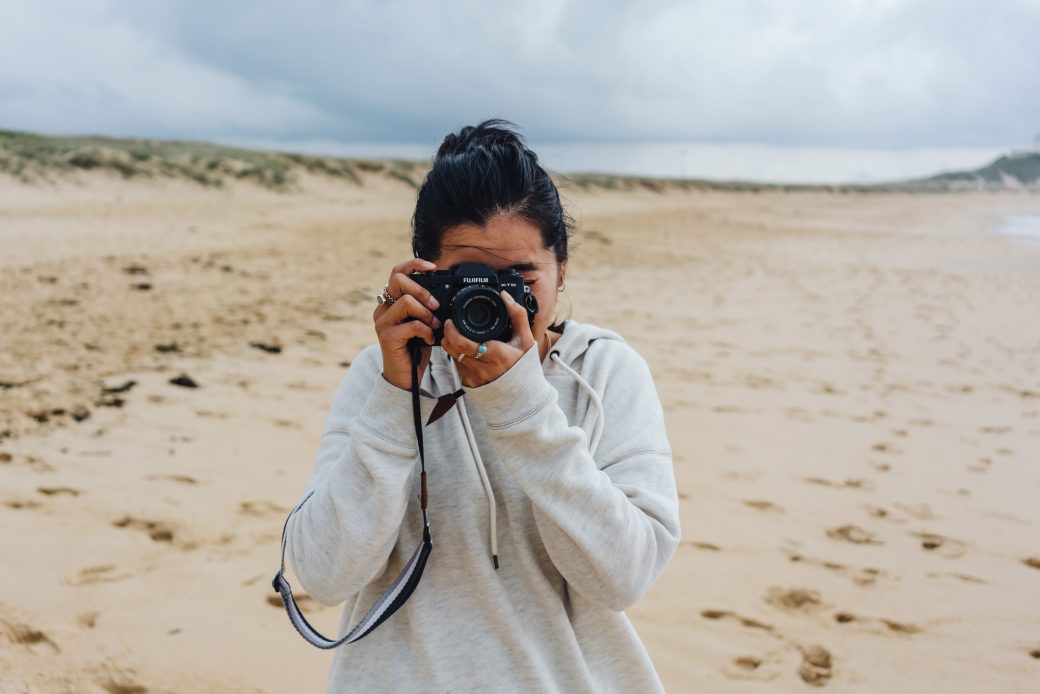 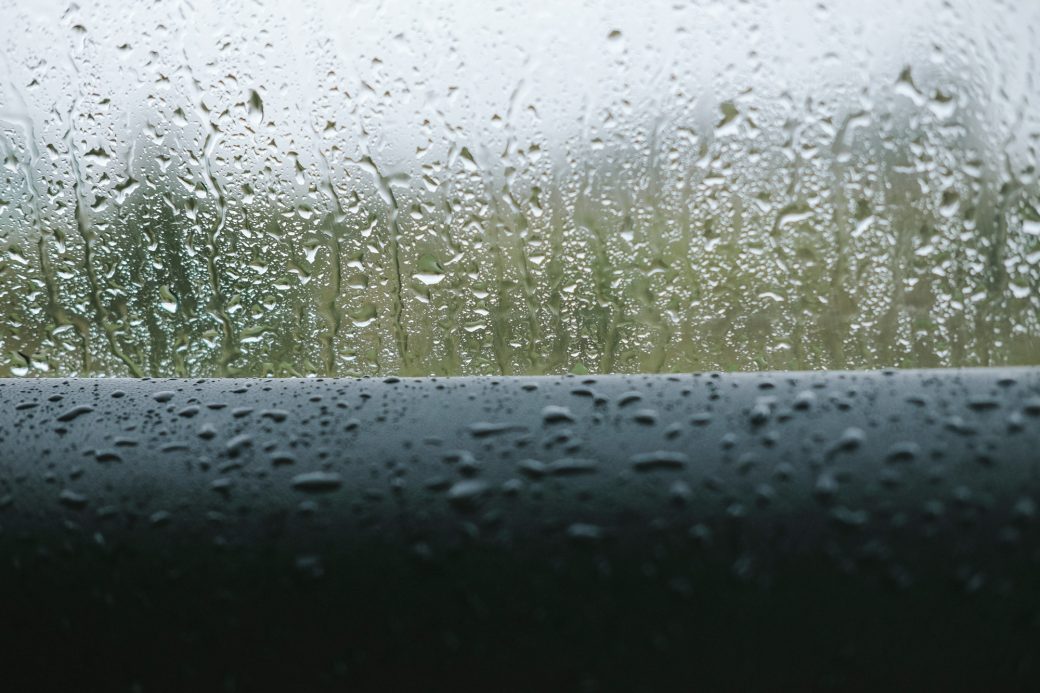 If you’re making the long drive from Newcastle to Coffs Harbour and looking for places to go for lunch, Greenhouse Cafe in Nabiac is an amazing place to stop. It’s one of the most memorable lunches we’ve ever had. Not to sound too dramatic.

The food selection was SO good. And the chips? No words. I don’t want this post to go into a full-on food blog, but I would definitely suggest it to everyone who’s driving that route. 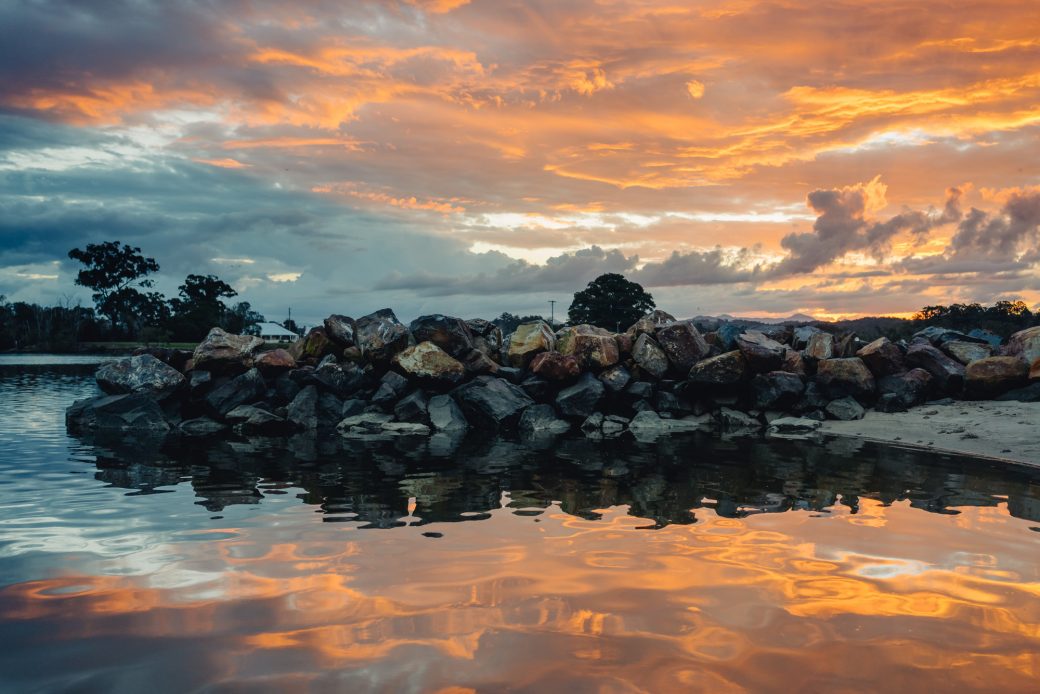 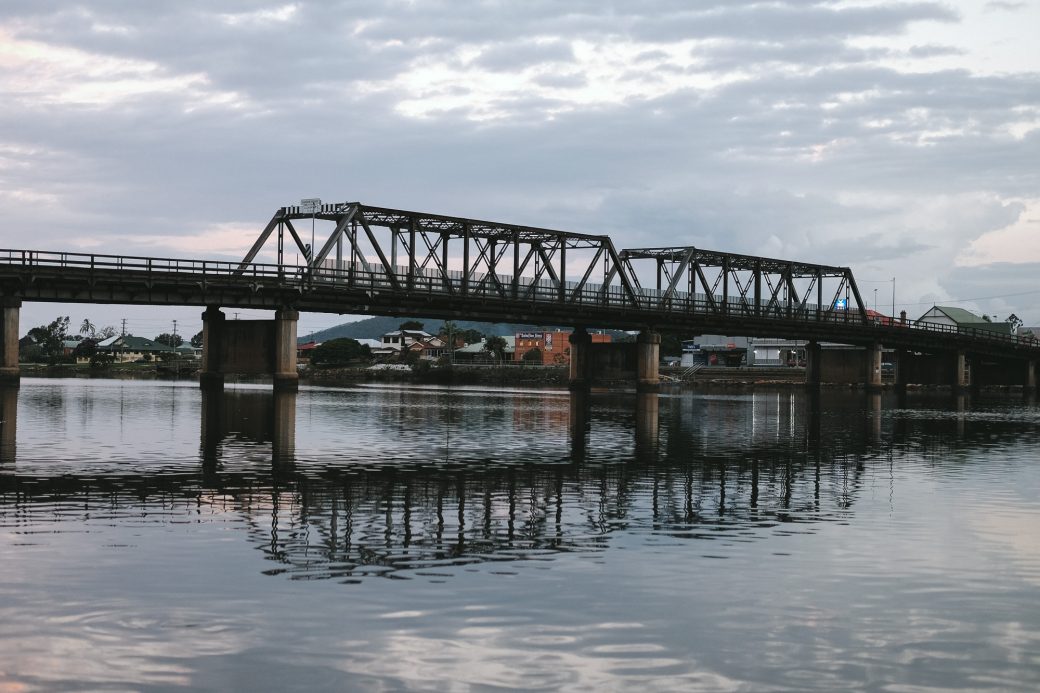 Moving on to Coffs Harbour, we got to Hoey Moey’s backpacker hostel which was… interesting. It was backpacker central and seemed to be the place where everyone (locals, underage kids, you name it) went drinking.

It is a small town after all.

With big, cheap food and drinks deal signs, it was quite fun to be basically staying at a student bar. Before setting off again in the morning, we went for brunch at Cafe Aqua, which again we would recommend as it’s just down the road from the hostel. 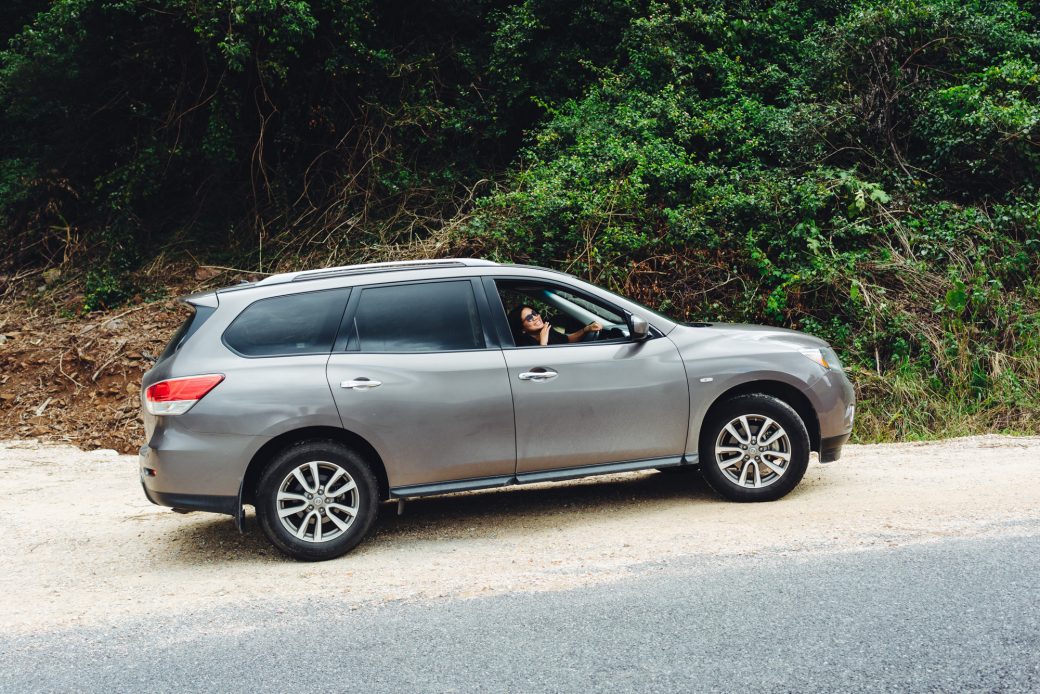 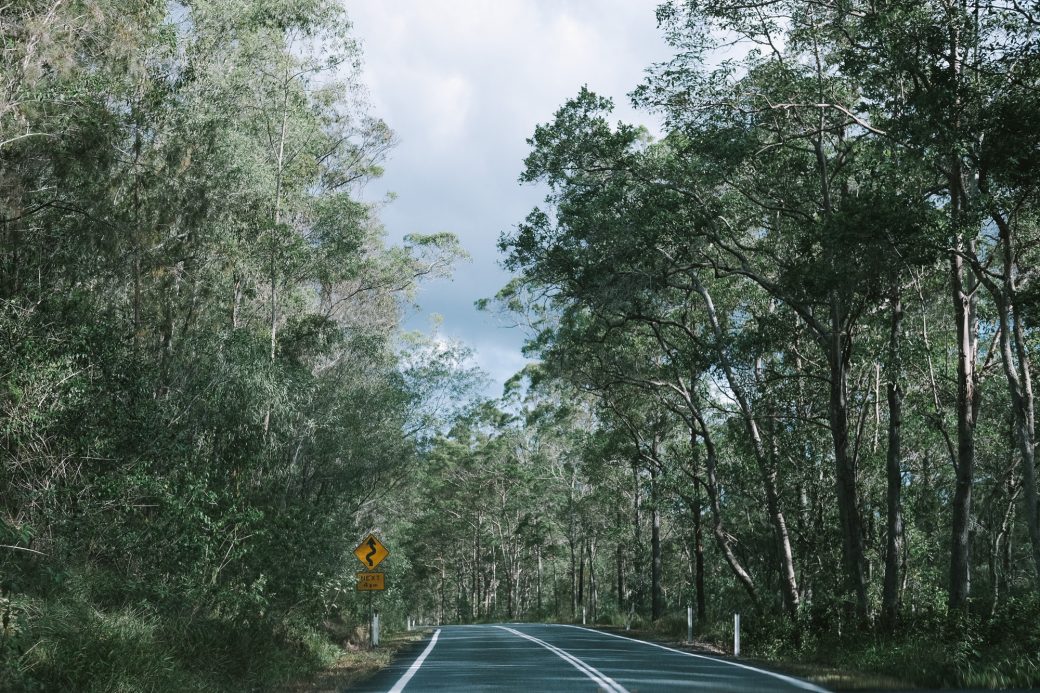 We were pretty excited to arrive in Byron Bay, as we’d booked a pretty handsome looking Airbnb for a couple of nights. Having been on the go for quite some time, it was nice to take a break from driving long distances with a couple of nights sleep.

People say Byron Bay’s a bit of a hippie town and it’s definitely true to the vibe, as I’ve never felt as laid back and relaxed. We saw one of the most beautiful sunsets we’d ever seen at Fisherman’s Lookout. The tones of the sky were insane and I would say that it was one of the most memorable moments in Australia for Joe and I. Seeing so many people trying to catch the waves at sunset was beautiful.

When we look back on our Road Trip around Australia, we both said that we think back to our time in Byron Bay and how amazing it would be to go there again for a holiday. 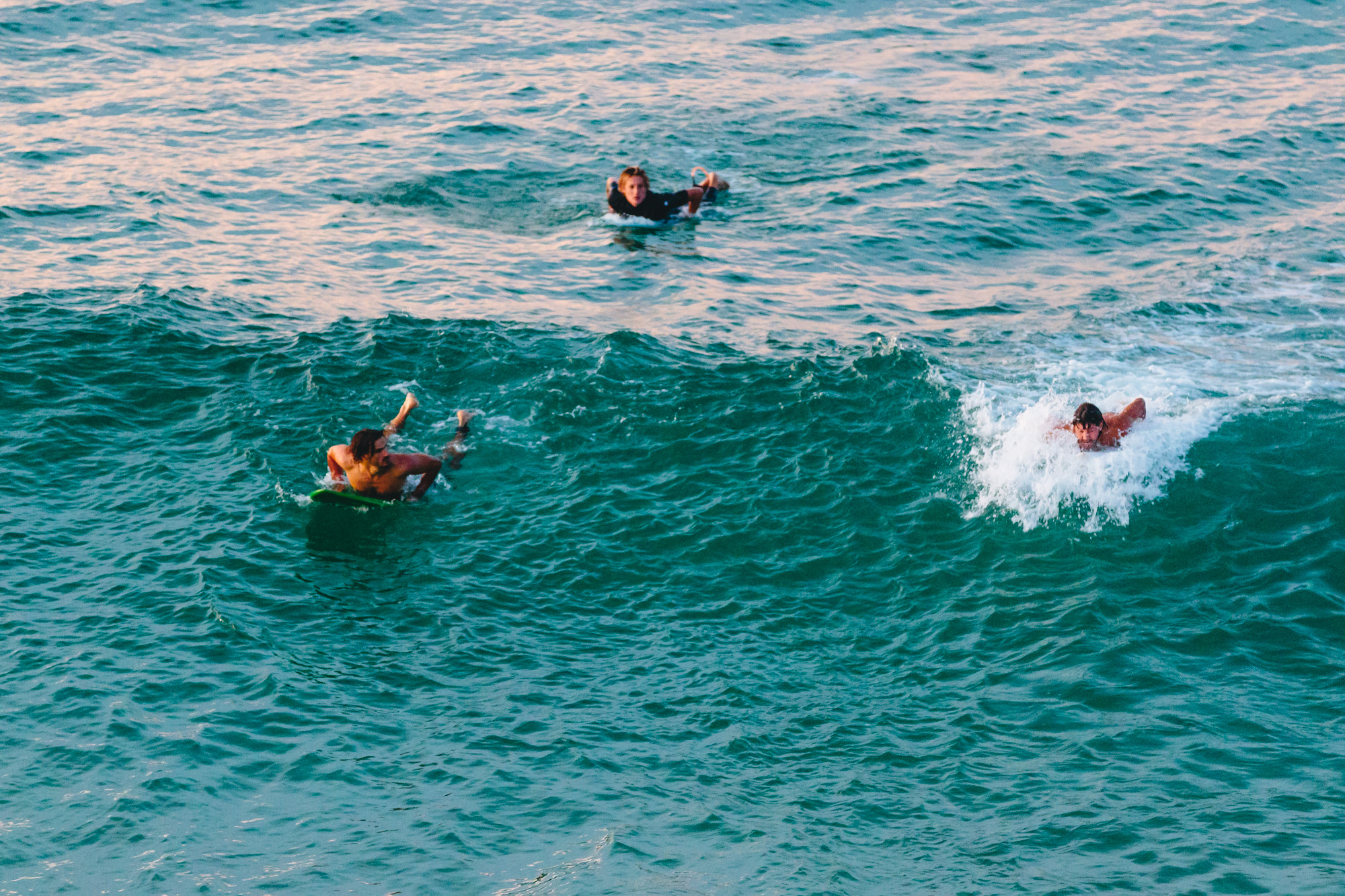 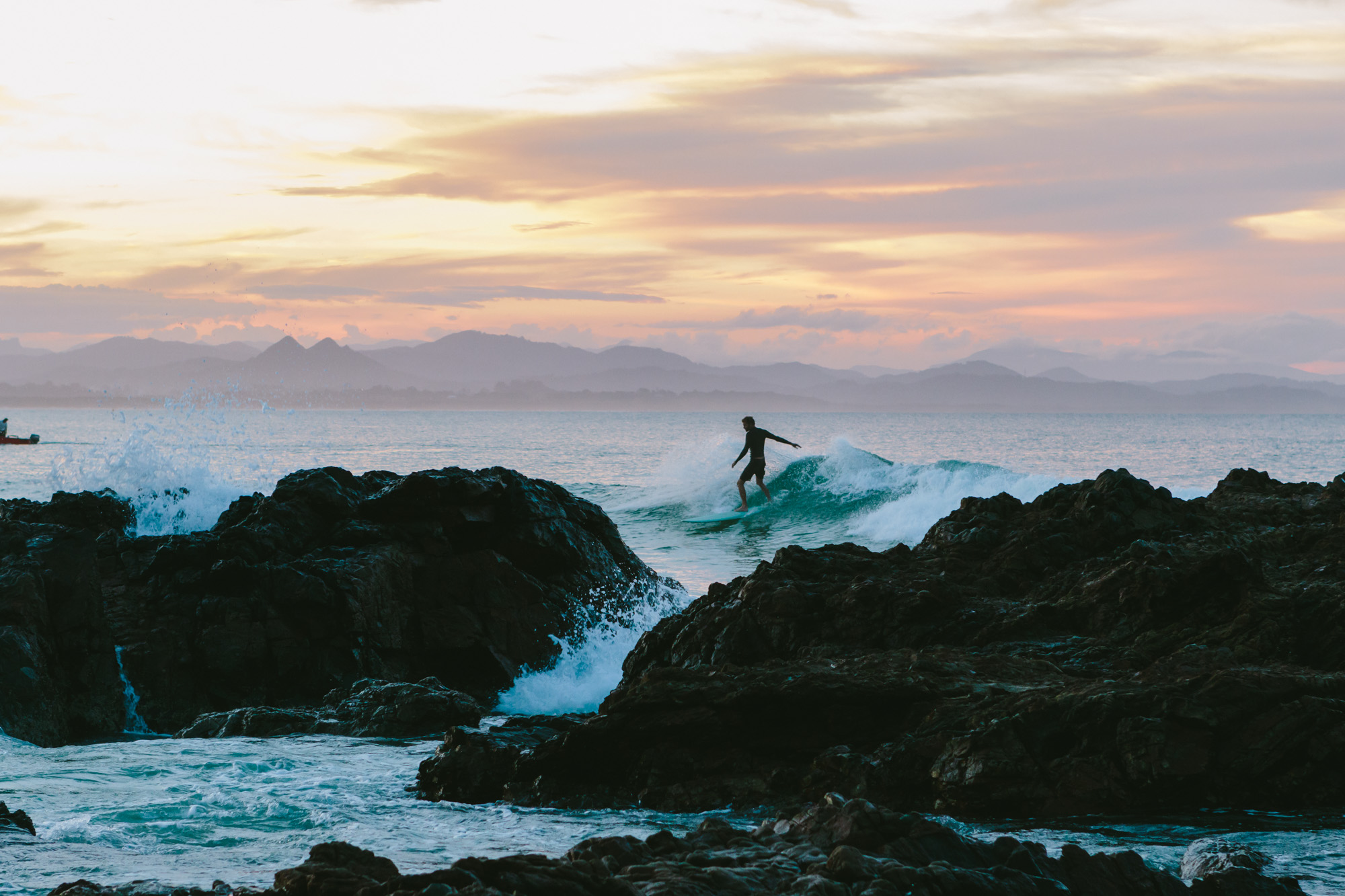 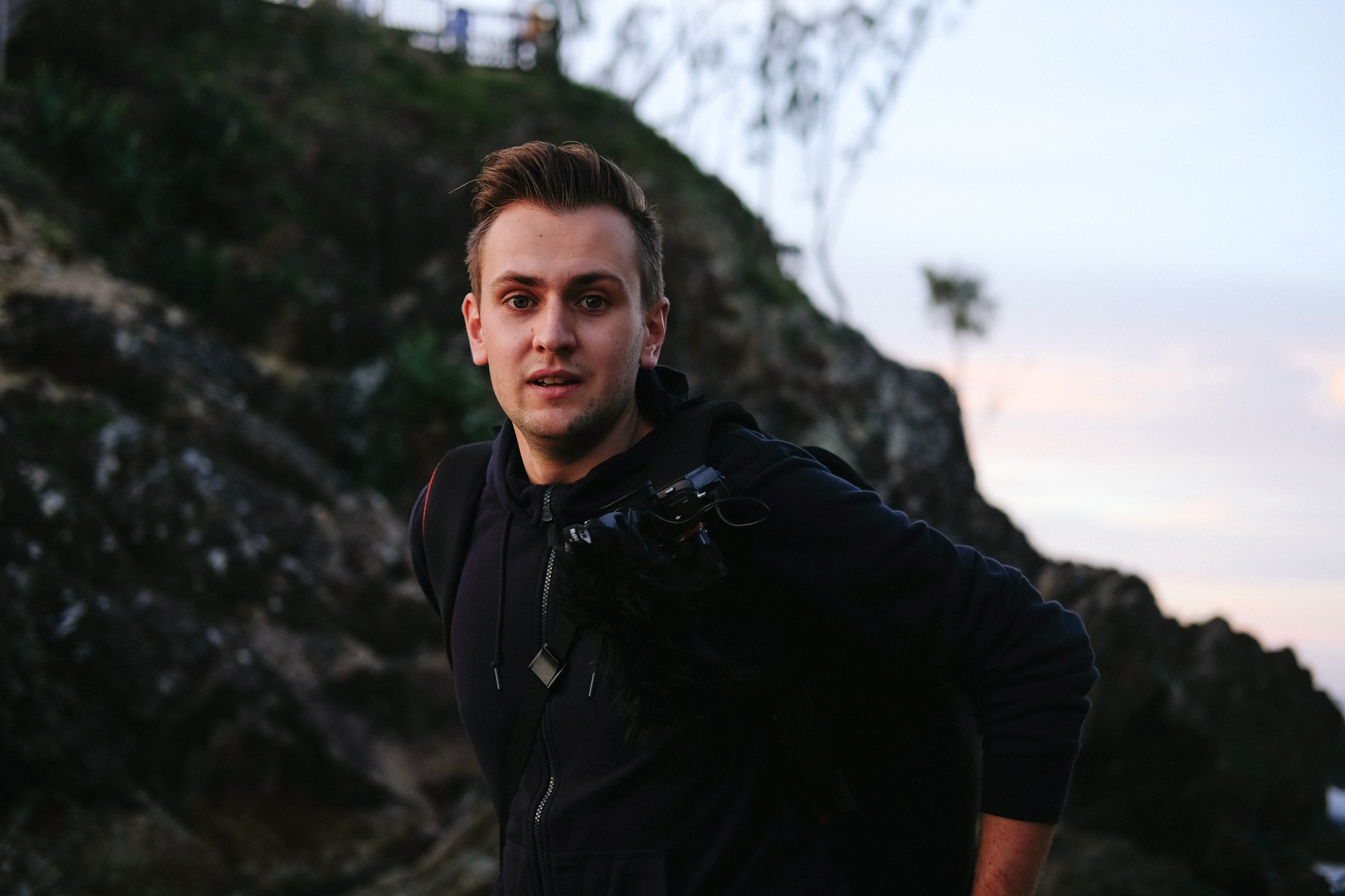 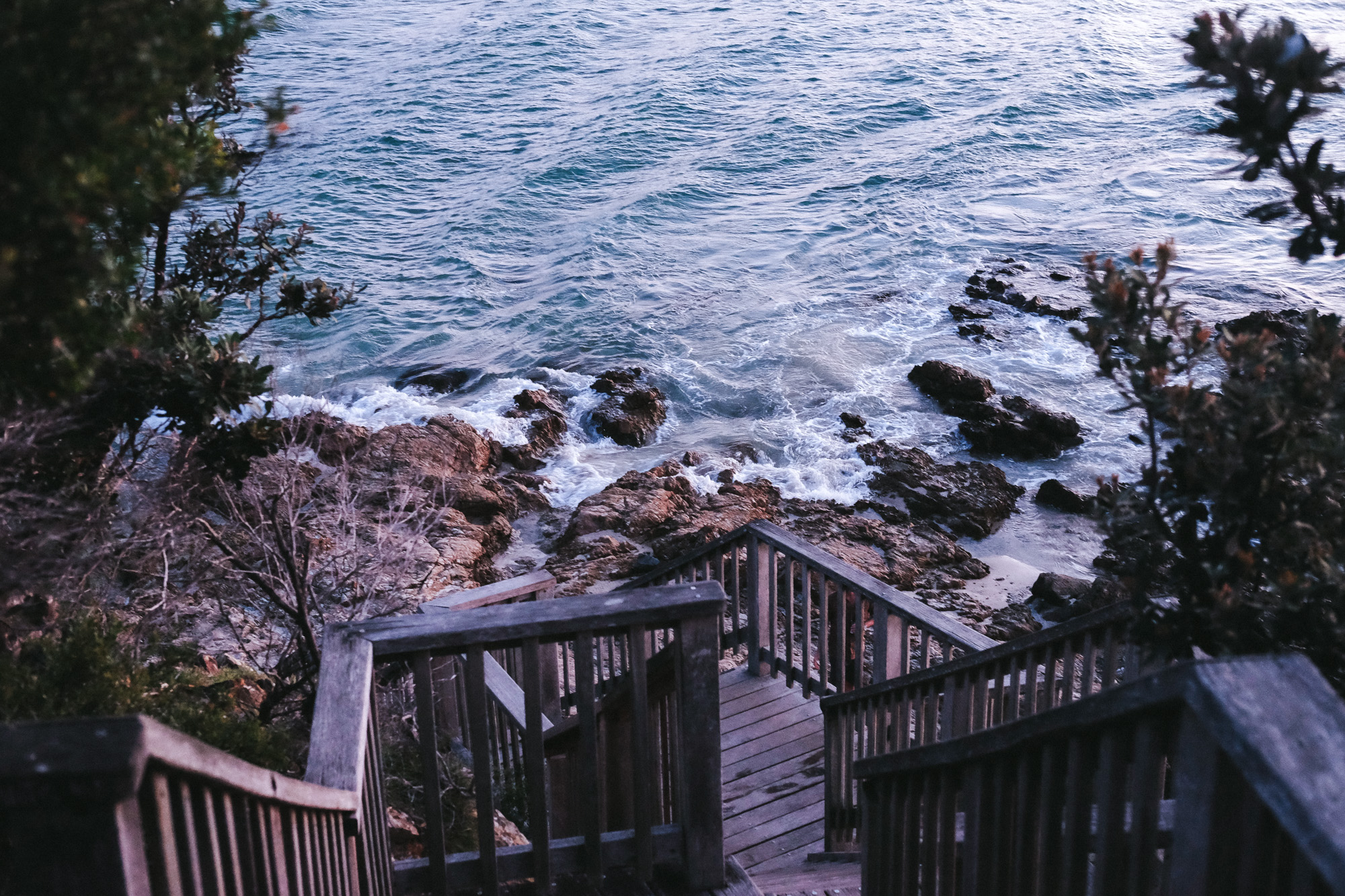 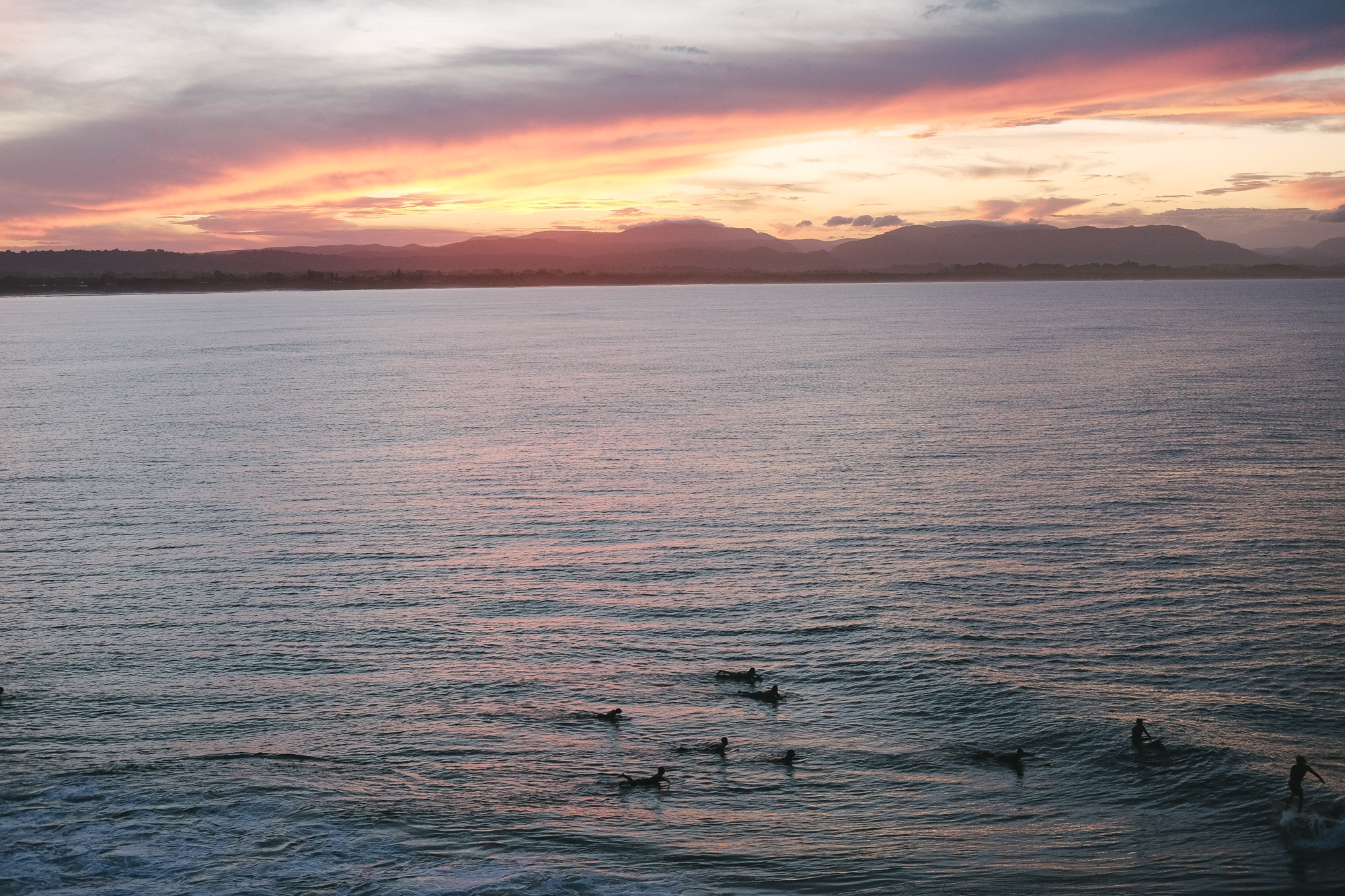 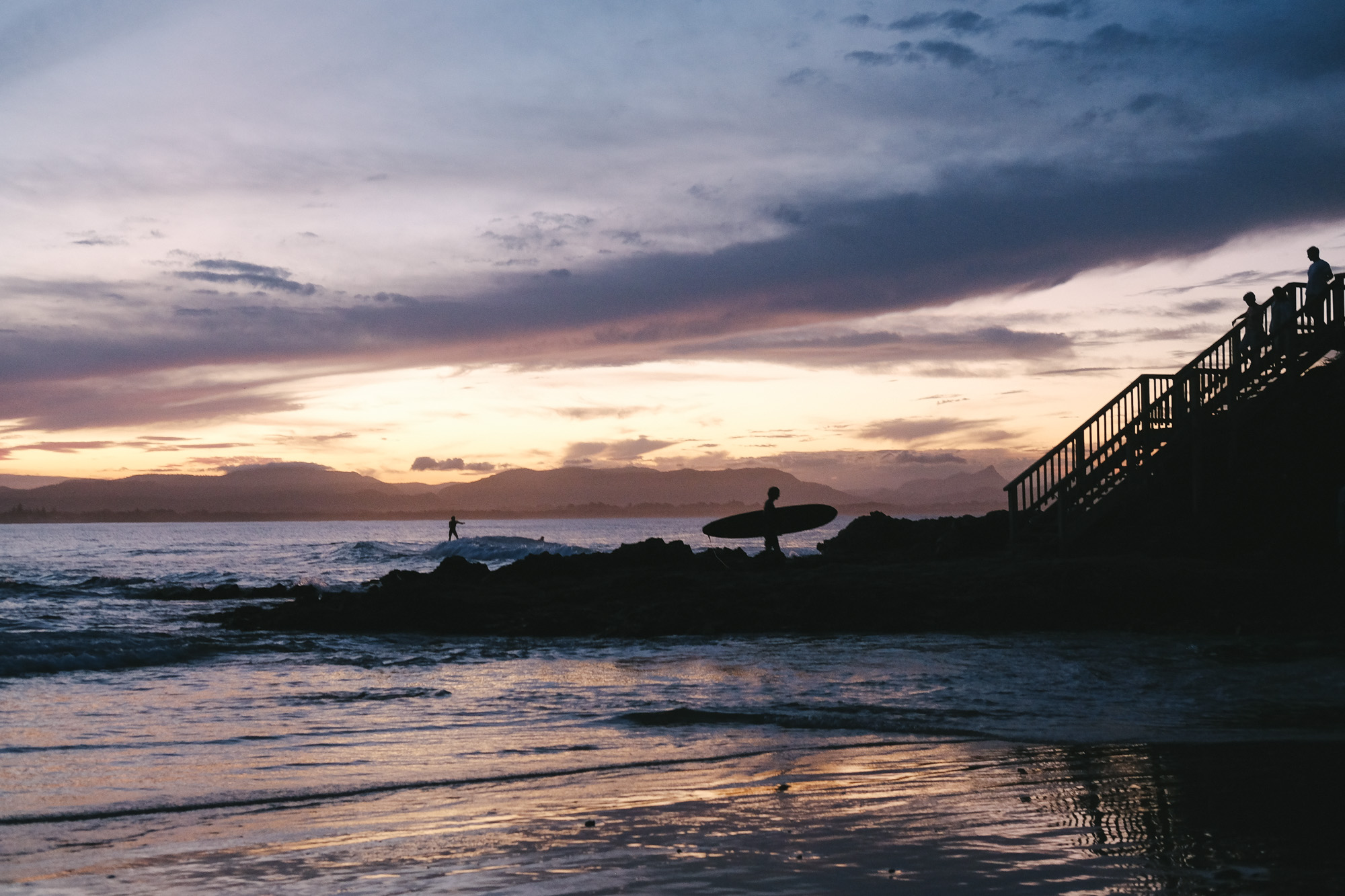 We looked into what we could explore on the way to Brisbane and we thought we would see the Natural Bridge at Springbrook and O’Reilleys at Lamington National Park. These were both pretty long drives heading through the mountains, with lots of long windy, scenic roads.

We thought they were good stops if you wanted to go see something, but I wouldn’t go back there in a hurry if I’m honest. If anything, next time we have more time to explore, we would probably try and find a road off the tracks a bit more.

One thing we wanted to point out, was that we never saw a (live) kangaroo on the road during the whole road trip. I know, right?! So when we saw a couple of wallabies in the car park, hiding in the bushes at O’Reilleys, we got a bit over-excited and giddy! 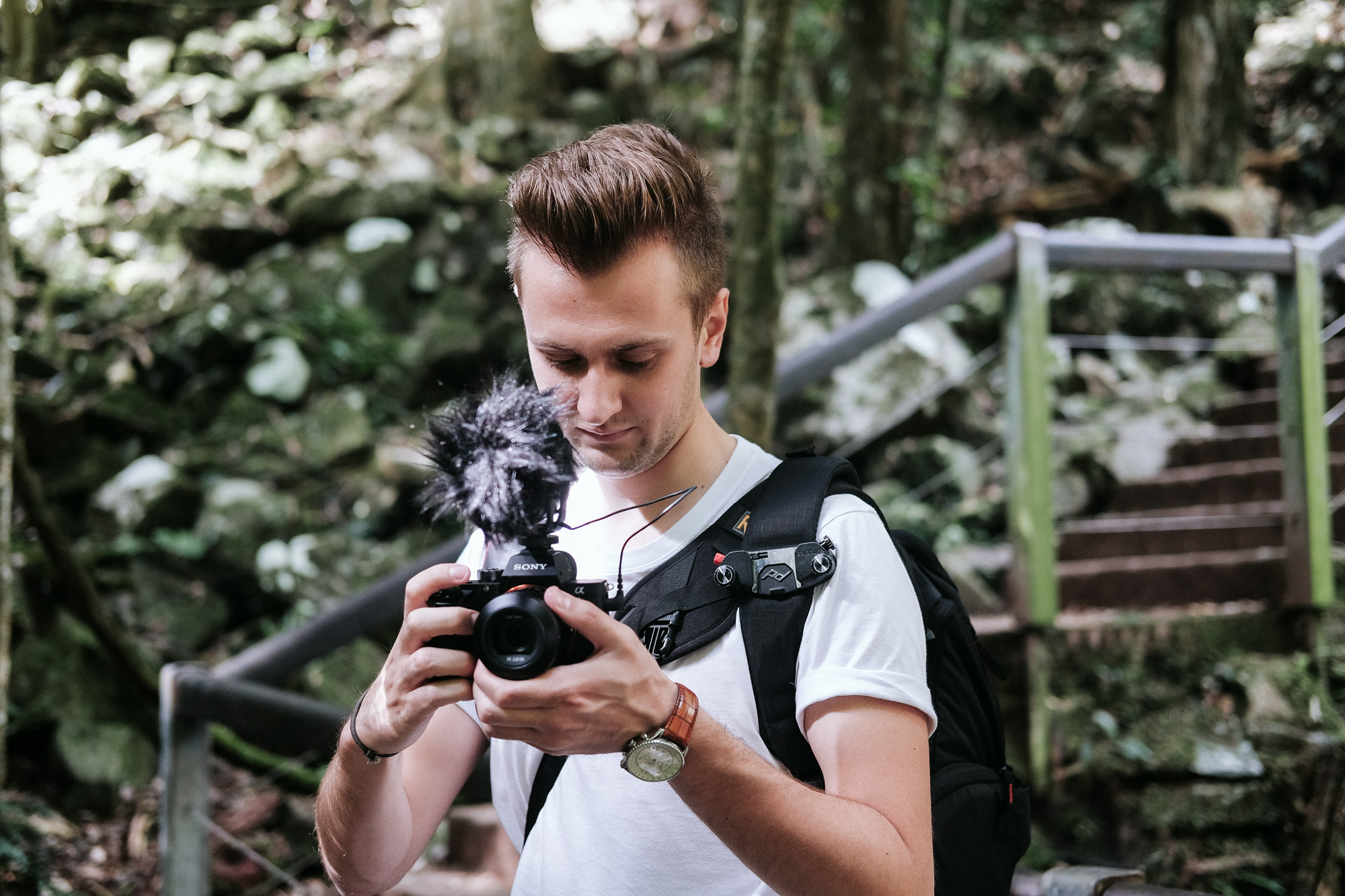 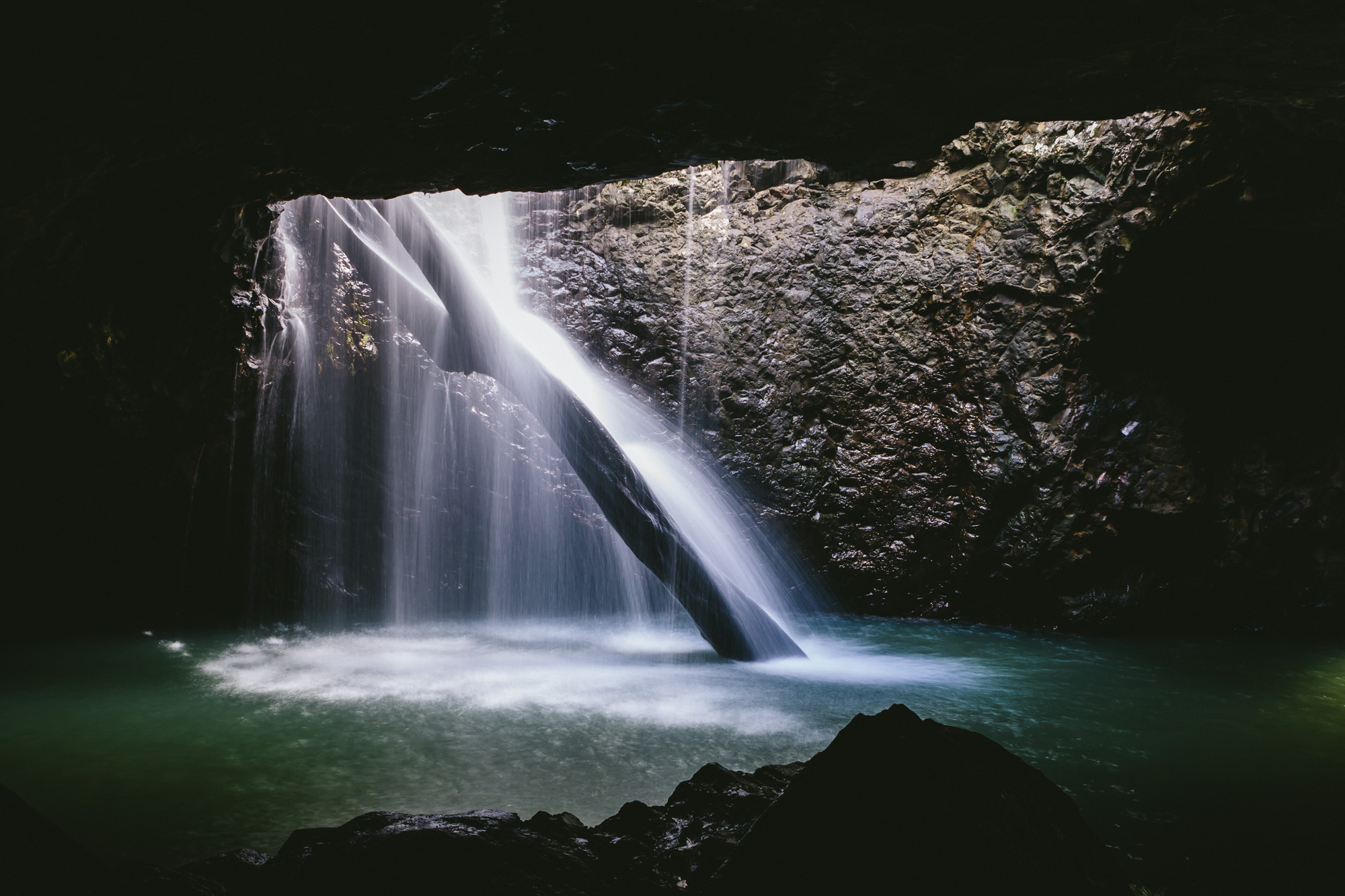 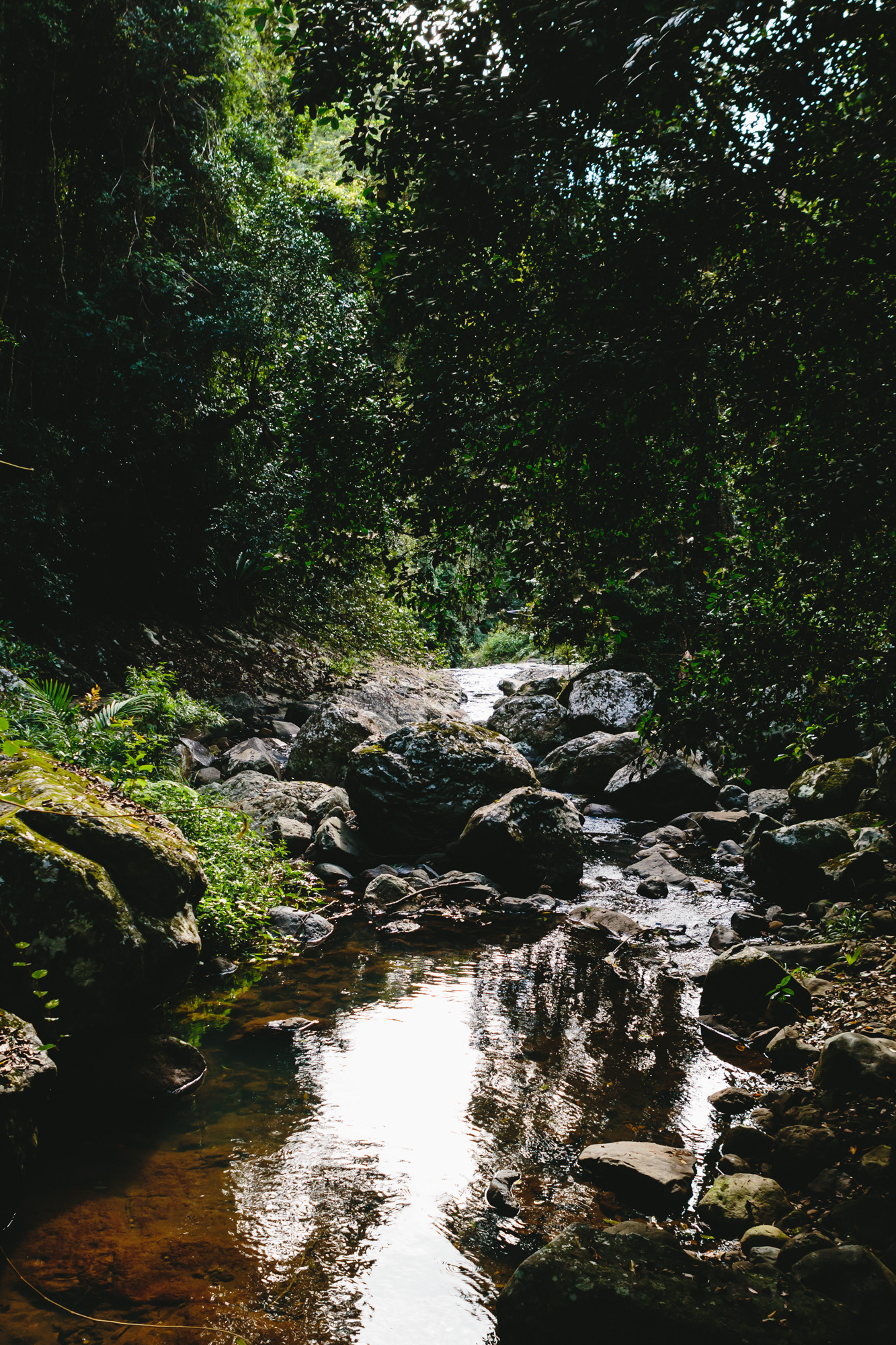 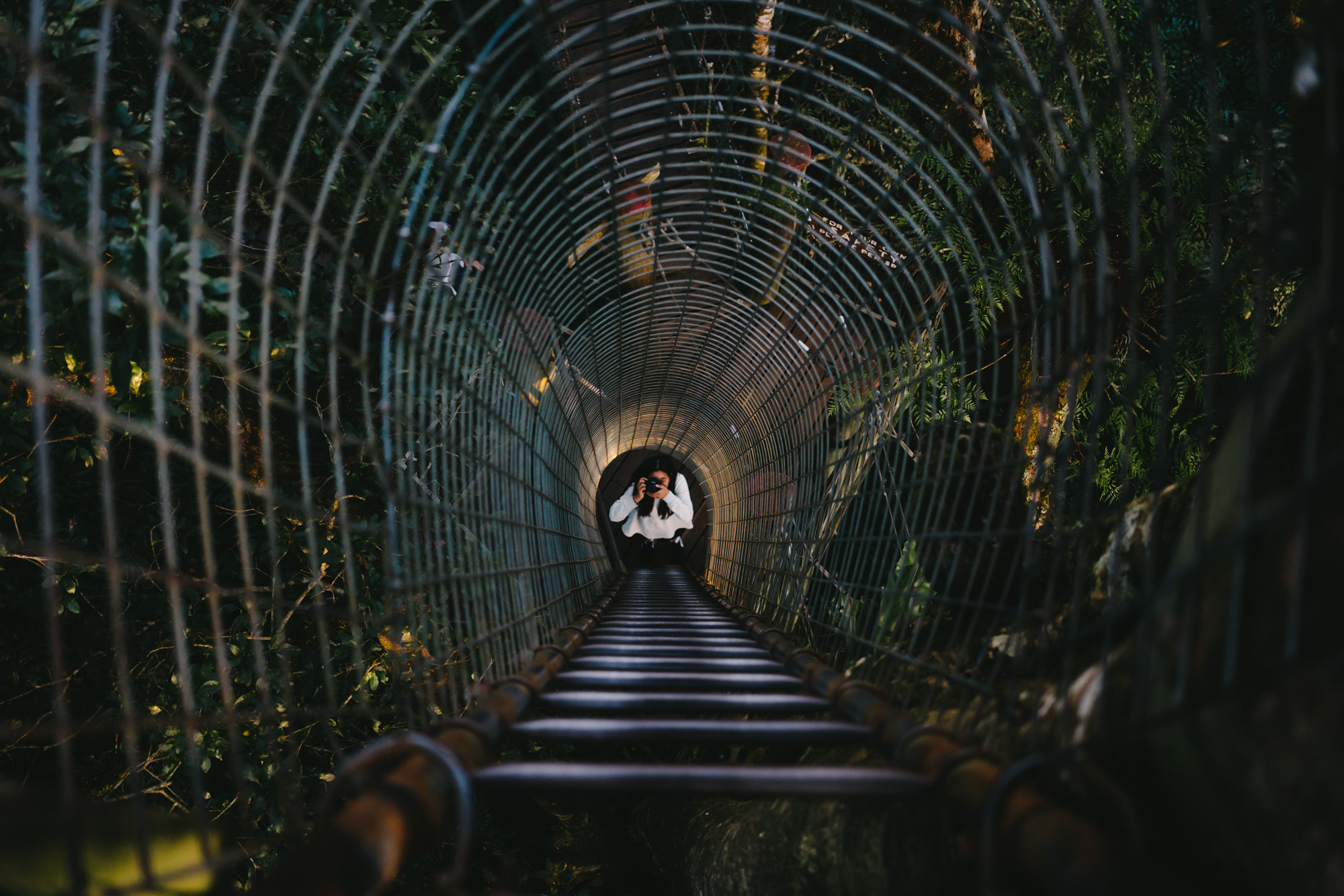 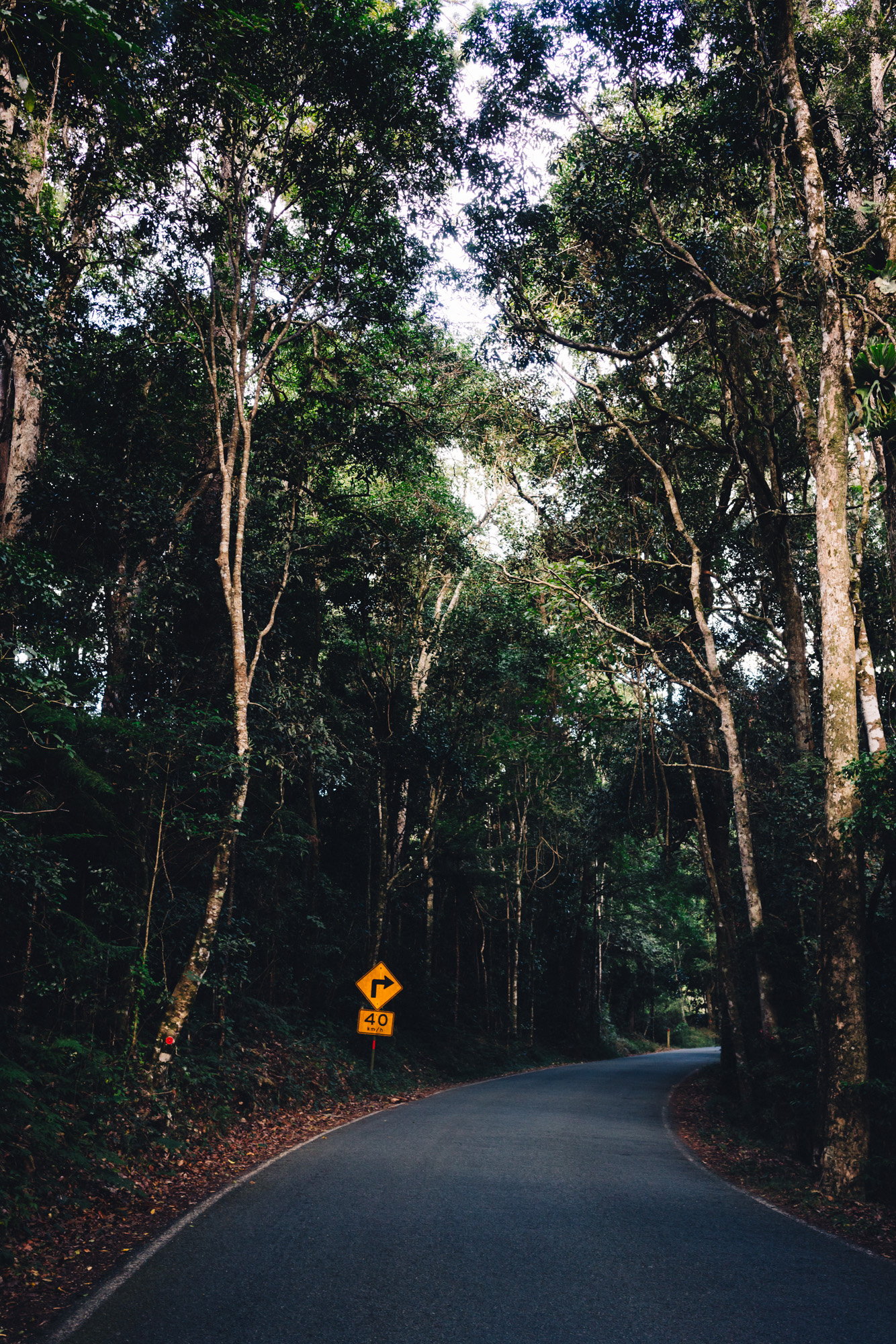 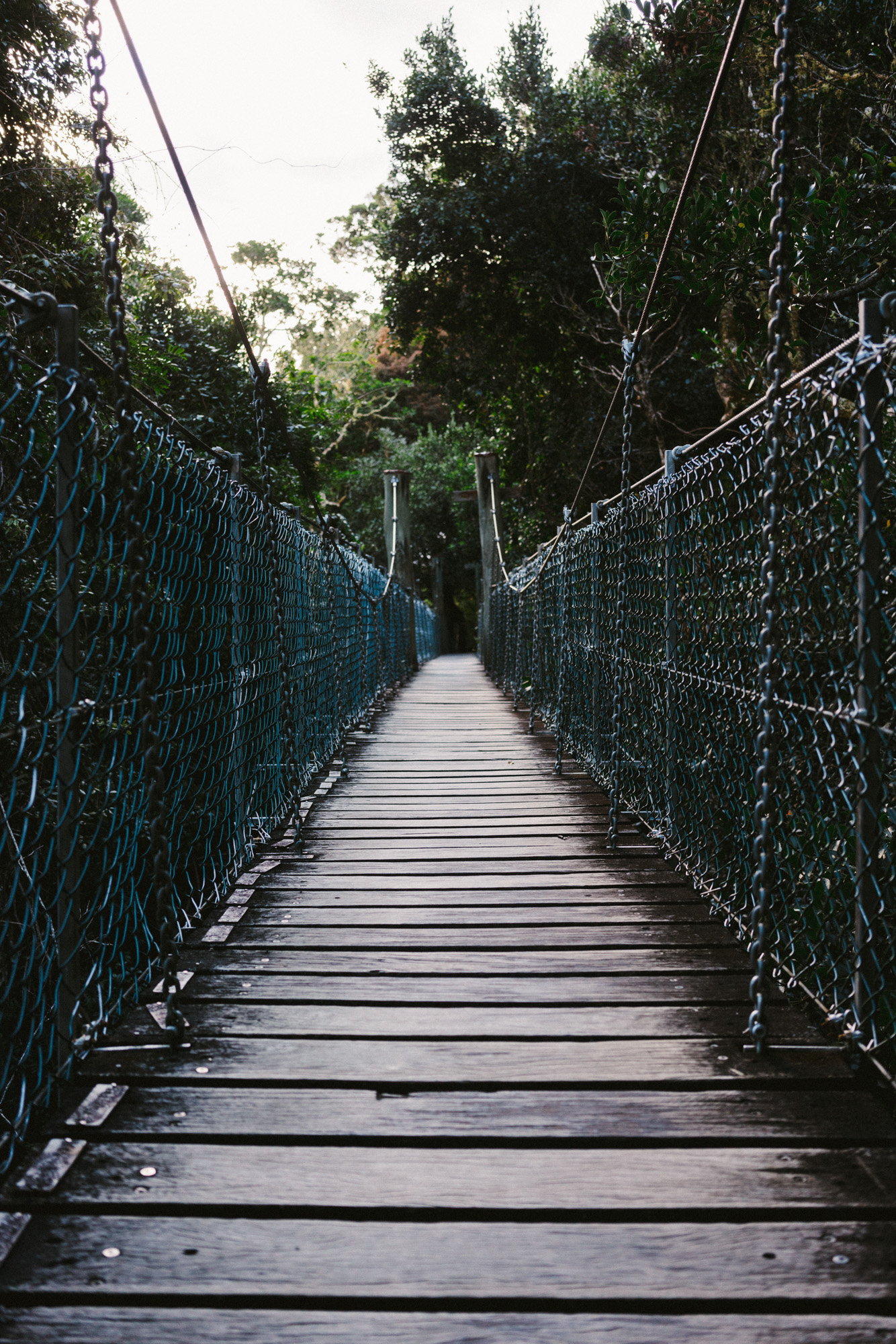 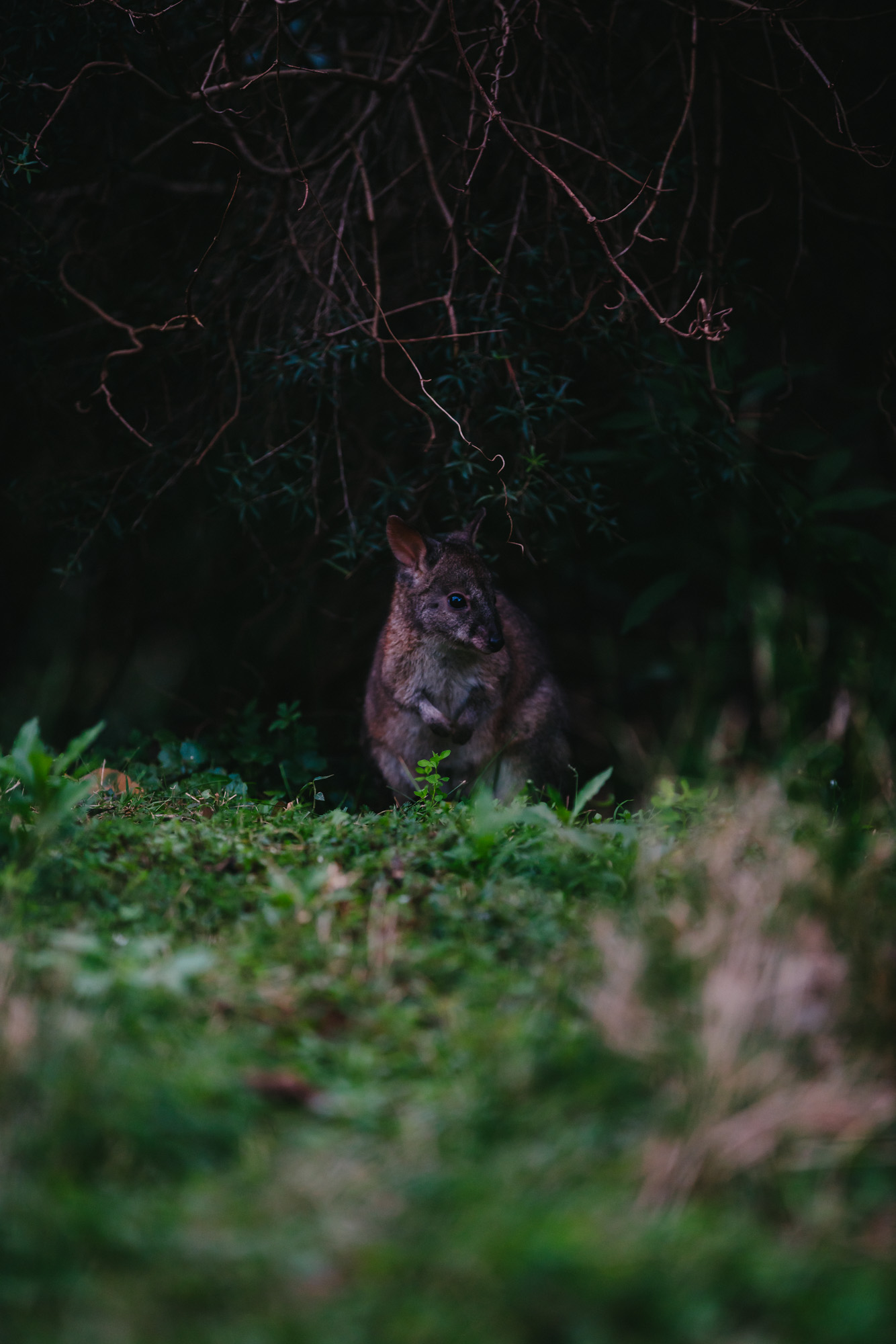 The great thing about being on a long road trip, is coming across utterly random scenes. On the way to our final stop, we pulled over to take some photos of this incredible lake/creek with a forest of silvery (dead?) trees. The contrast of the bright trees and dark water was really eye-catching!

Later on, we found out that we’d passed through Numinbah Valley, if it had been a bit later on in the day, we would have probably gotten some even better lighting for the photos. 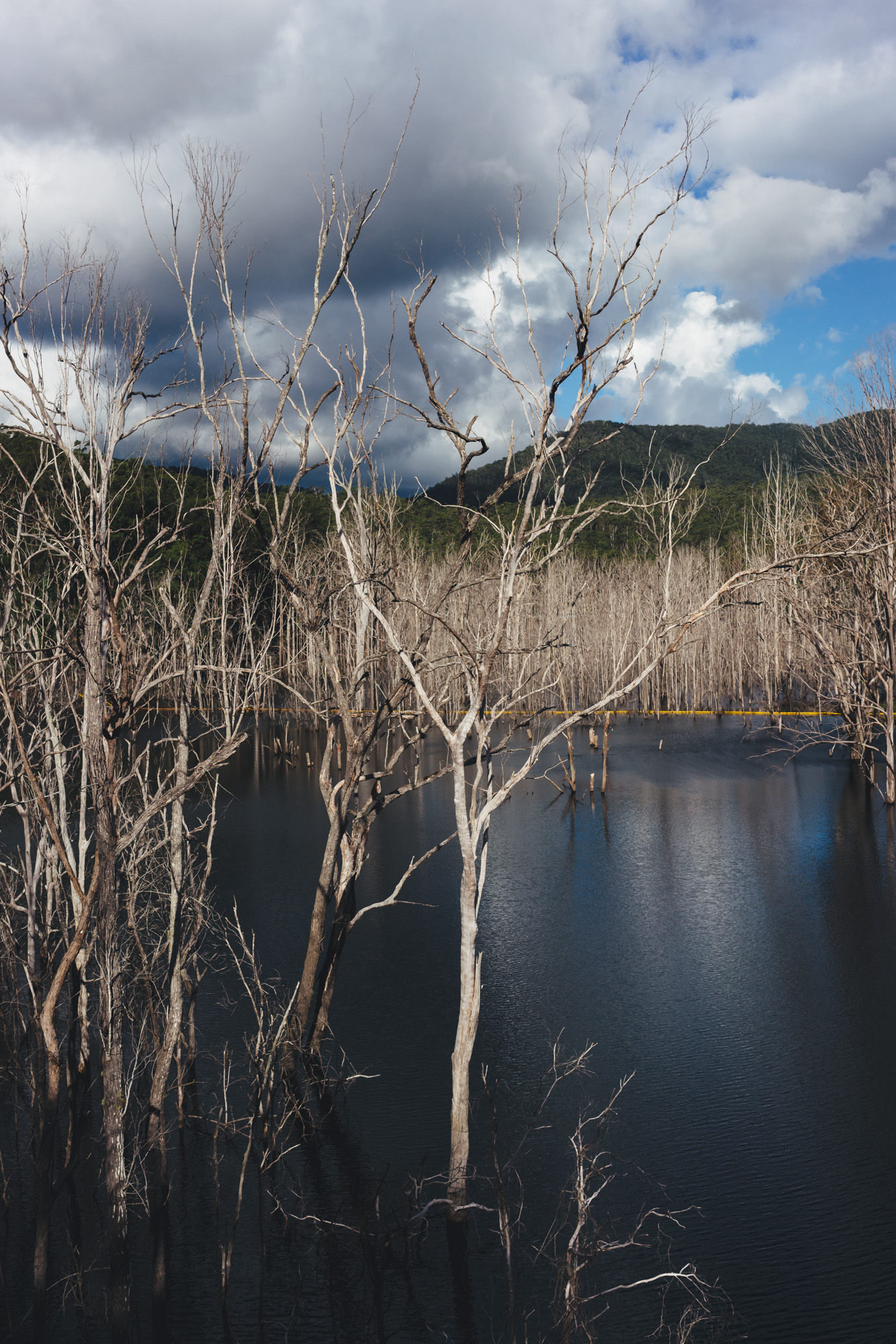 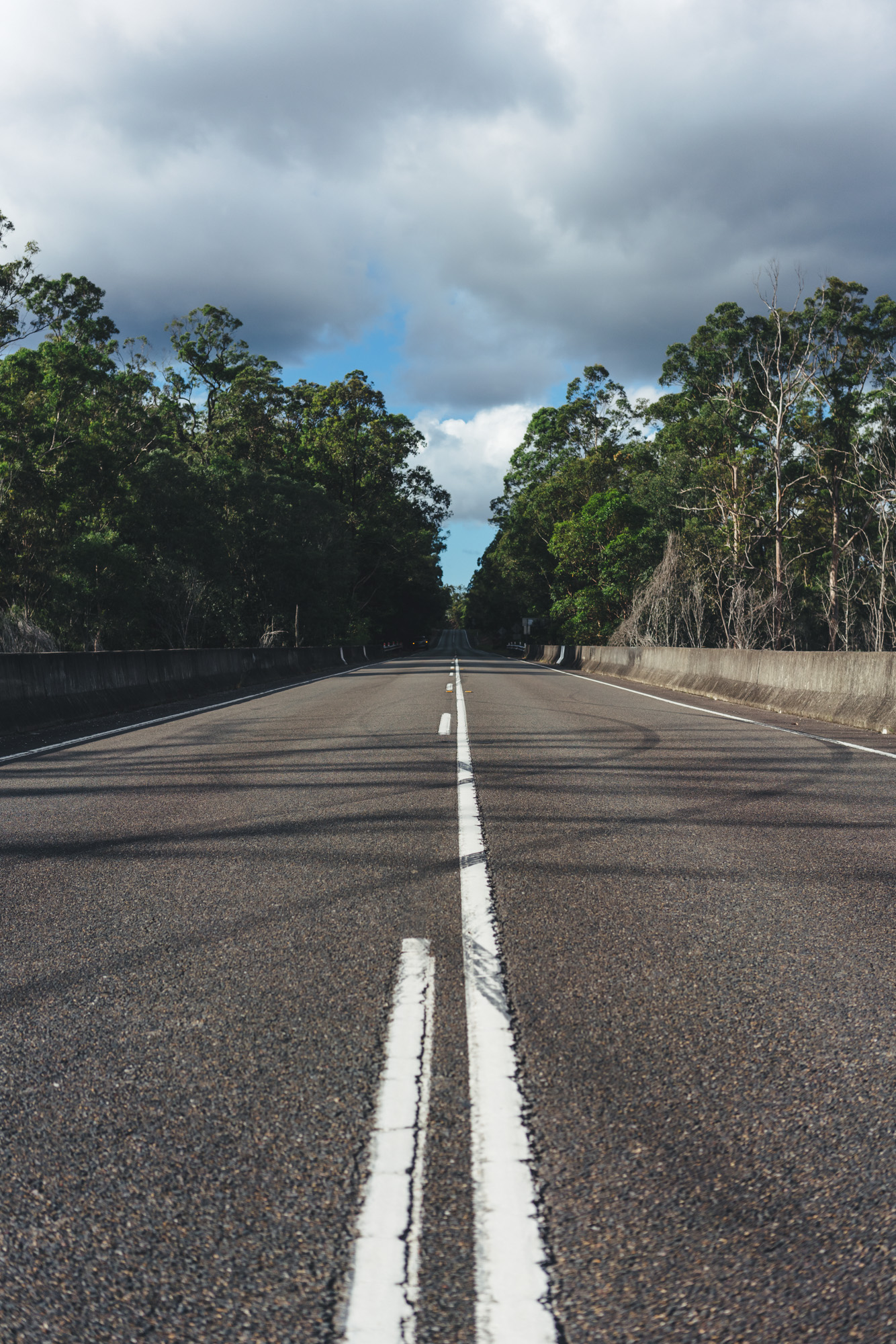 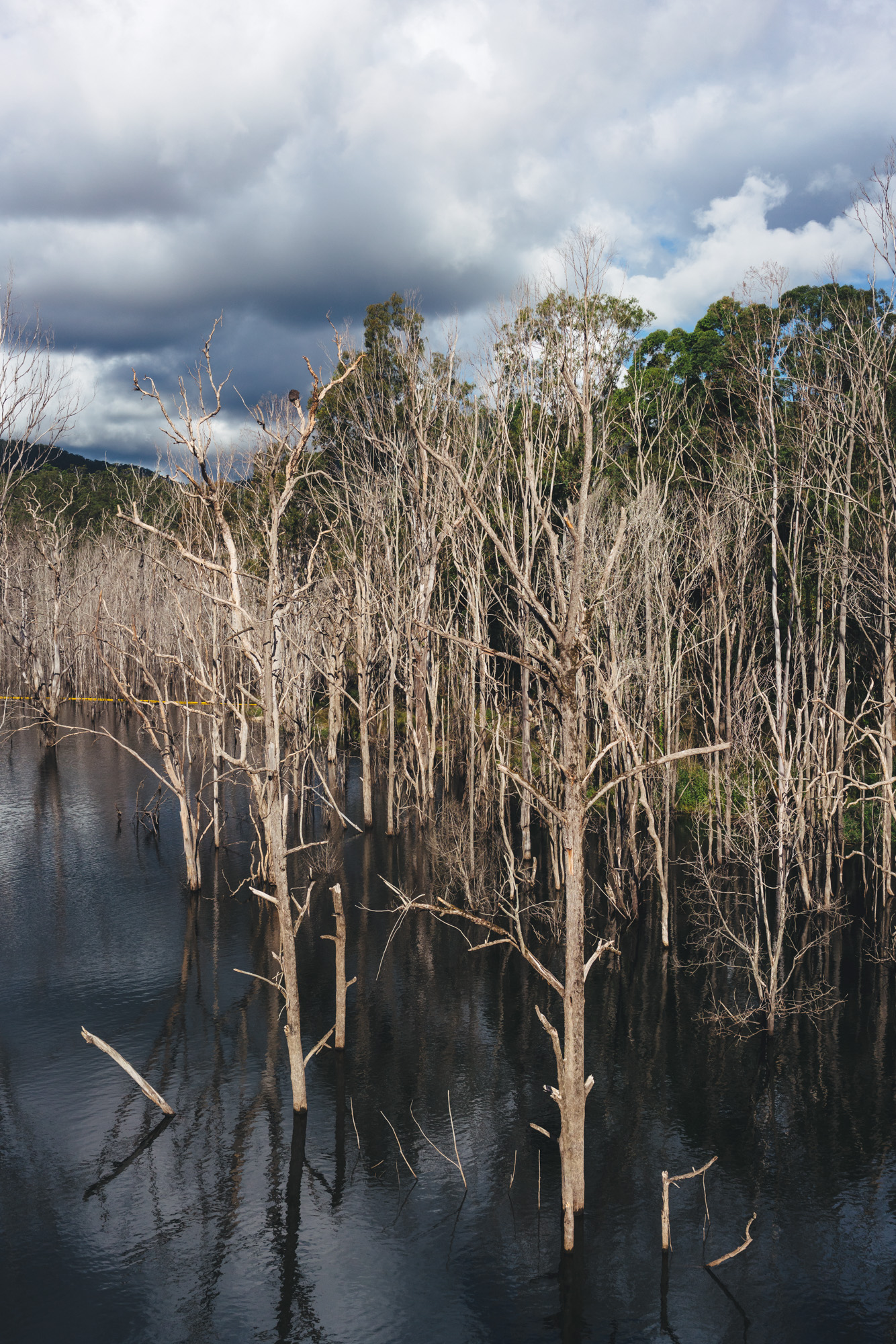 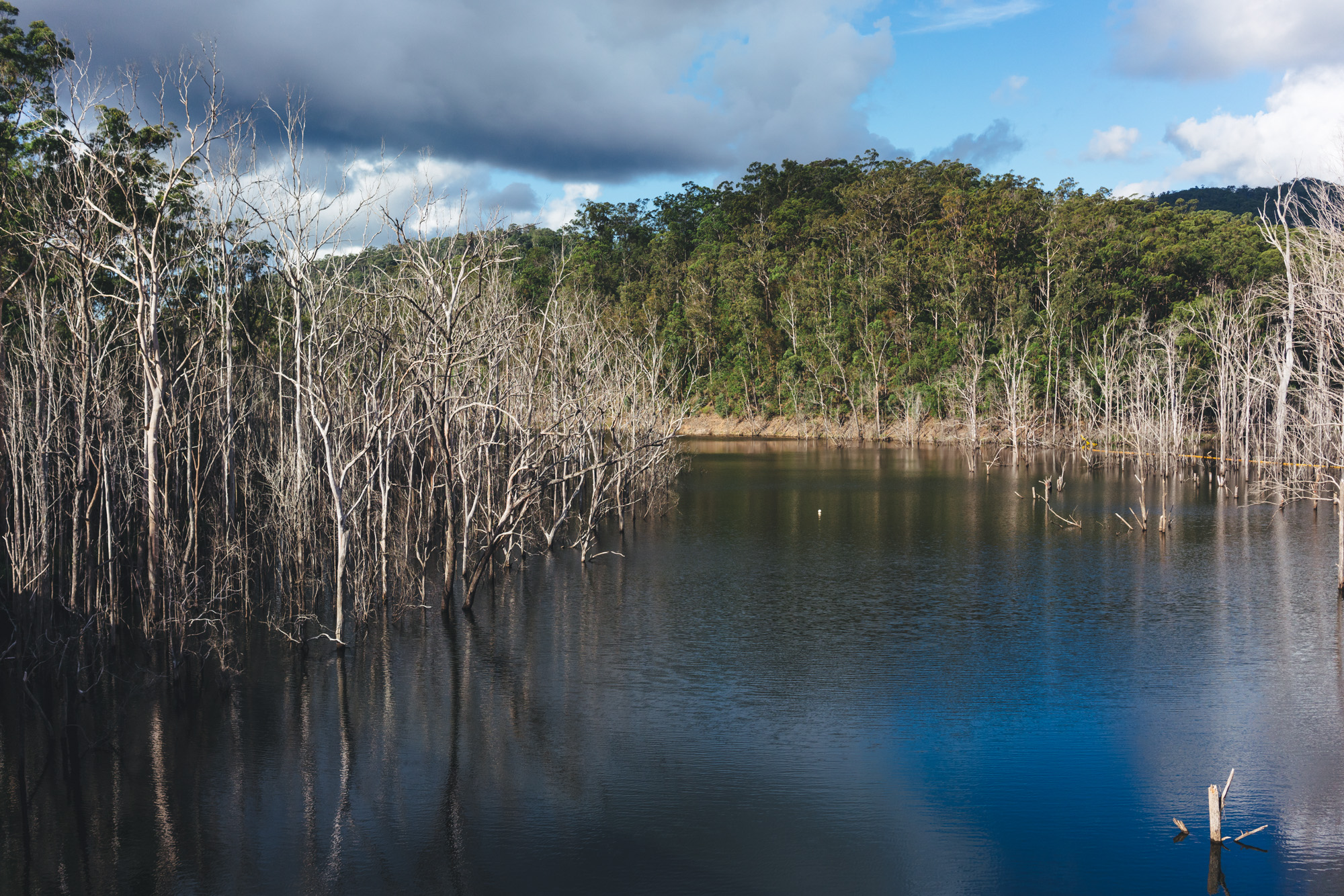 Our final destination was Brisbane, and we stayed there for a few nights with some of Joe’s family. We arrived pretty late, so the following day we went back down to visit the Gold Coast.

Driving through the city, we didn’t really think much of it, except it looking quite flashy. I don’t think it’s really a place we’d go back again. It looked like they had a lot of money thrown into the city and built it up quite quickly. It was all a bit fake and manufactured really.

We’d heard from other Aussies to check out Coolangatta instead of the main beach, which is probably what we would do if we went back to that area again. 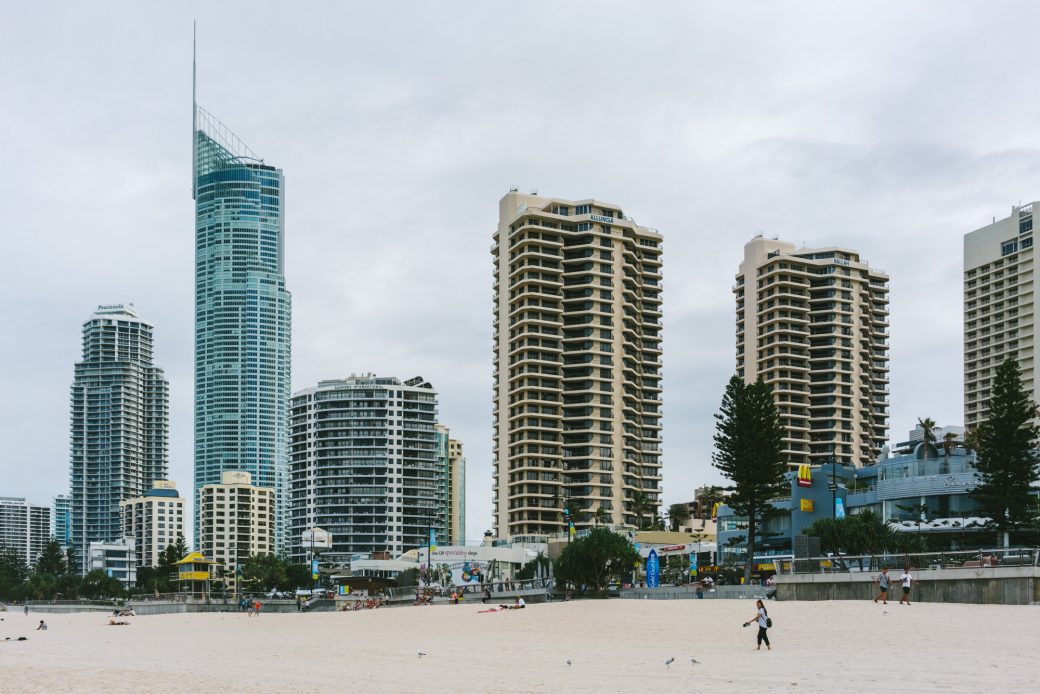 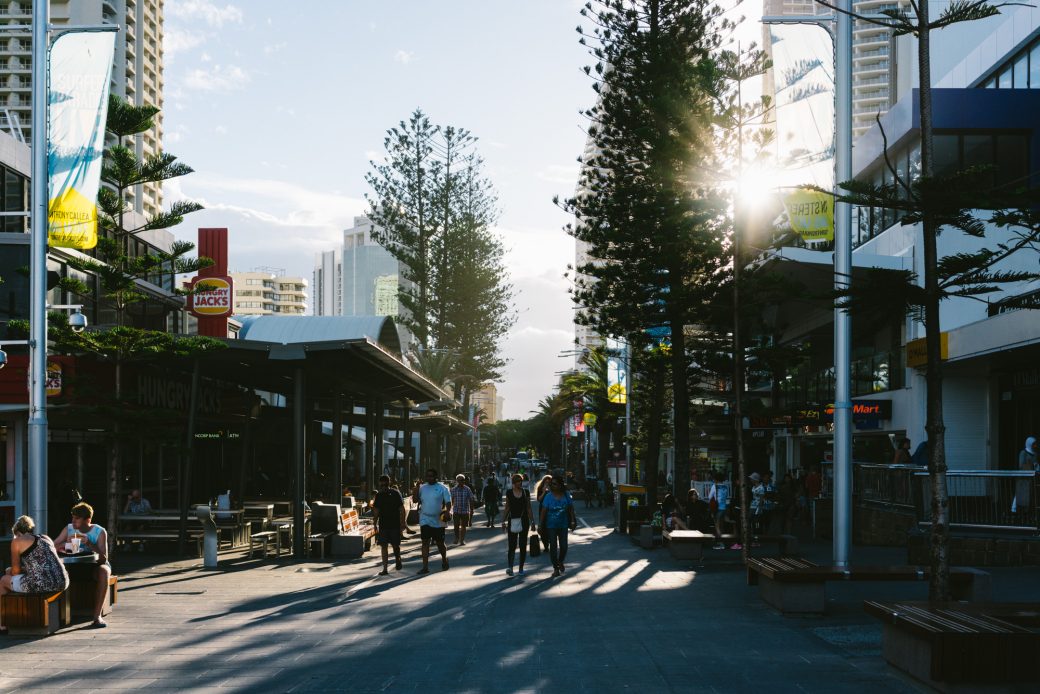 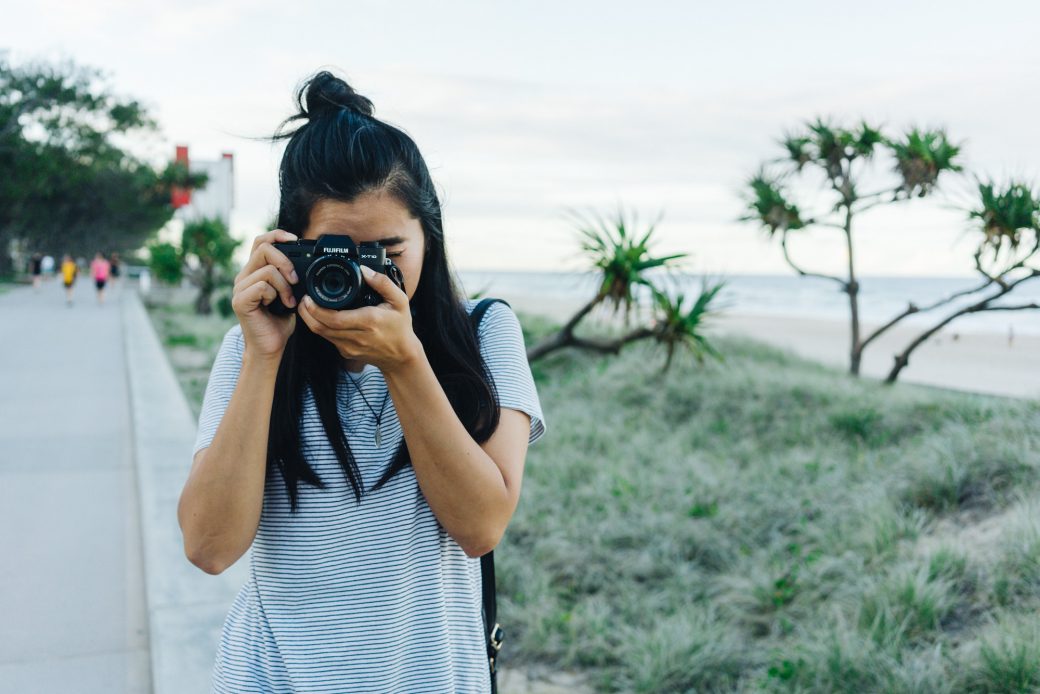 If you checked out the vlog, you’d probably think we didn’t do much in Brisbane. We just took some time to relax with Joe’s relatives and spent a lot of time drinking a LOT of red. A piece of us fell in love with Brisbane and we definitely wouldn’t rule it out as a place to live, as it looks super comfortable and a reasonably big city. 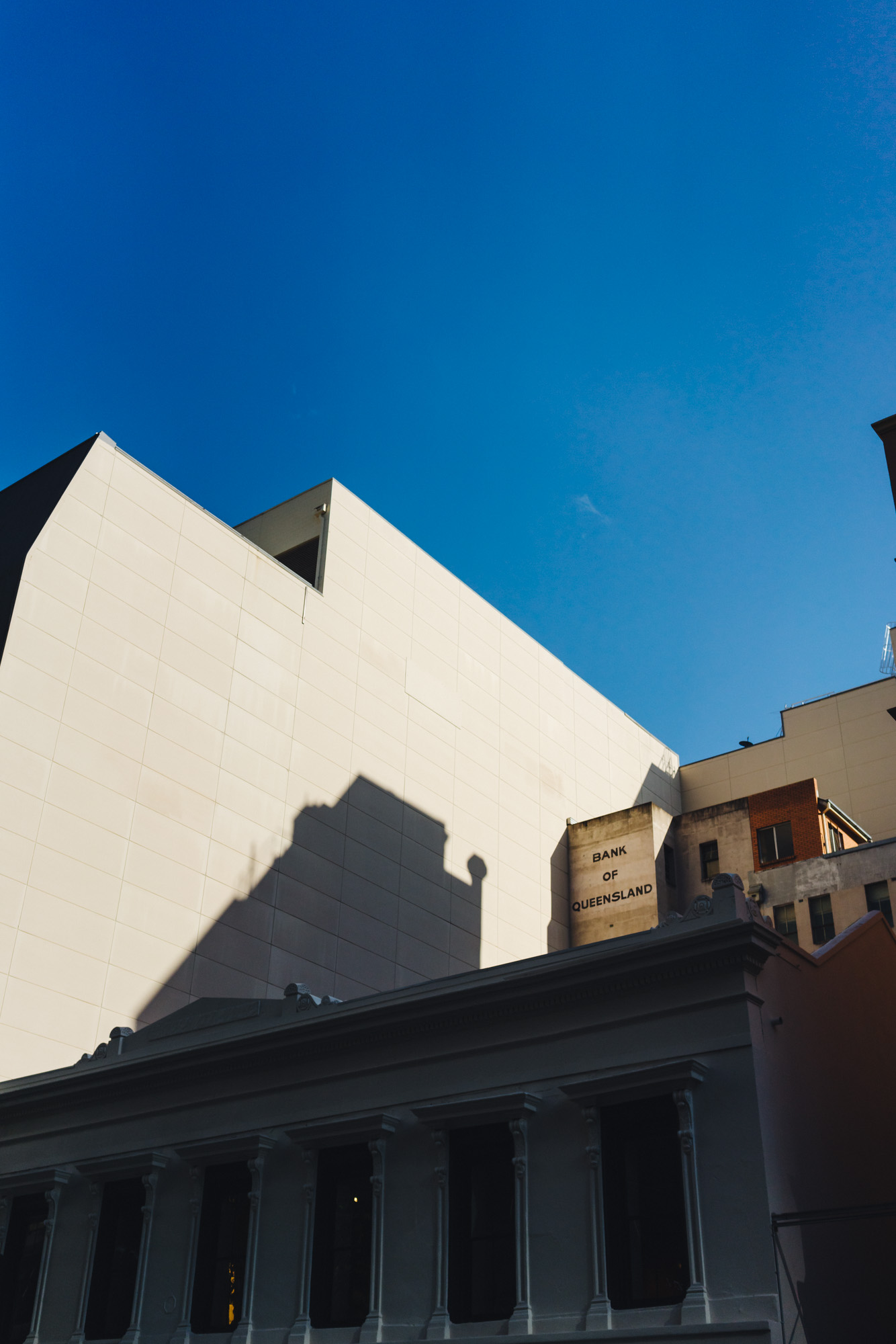 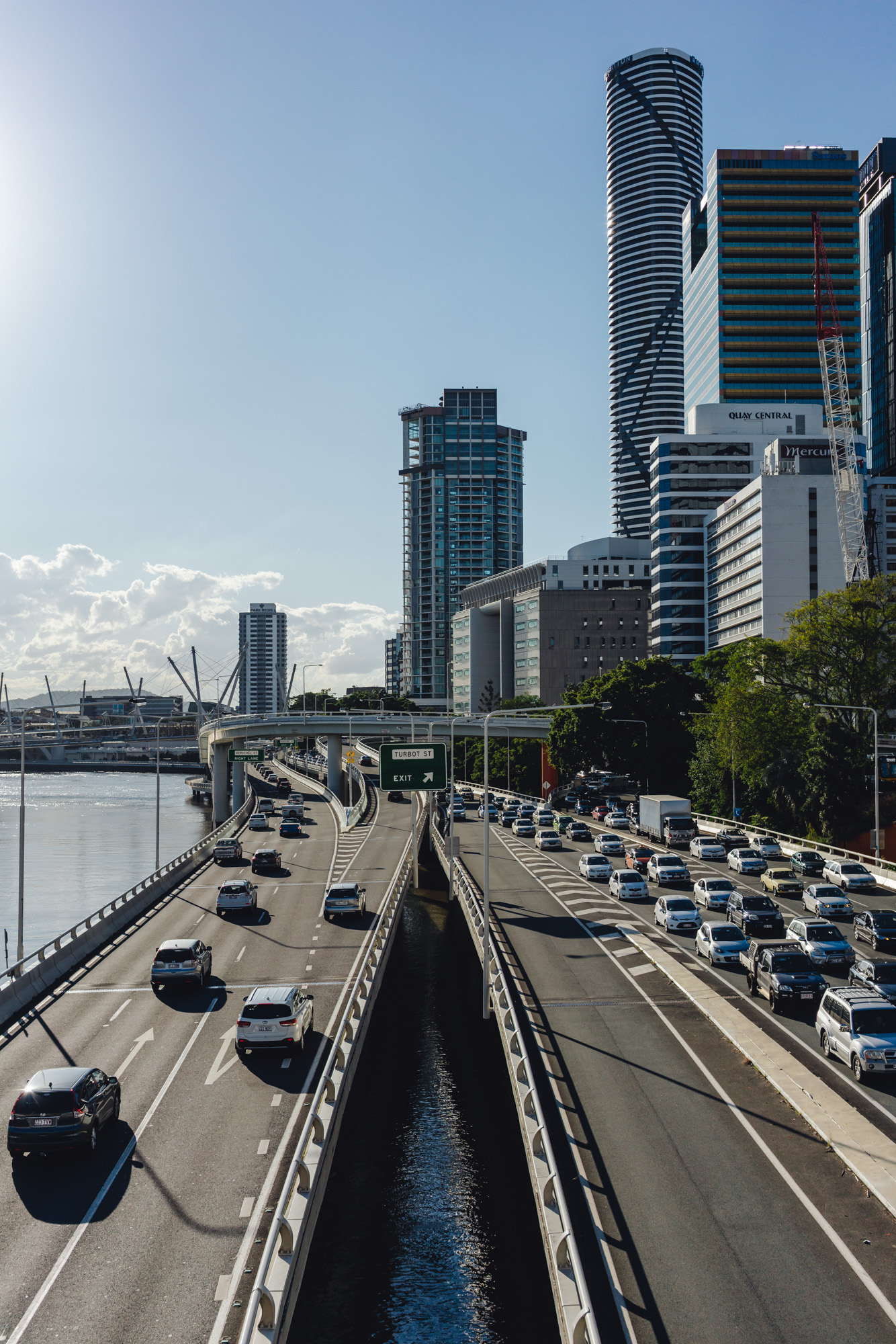 Check back next week for our next post and video of our adventures around New Zealand and subscribe to Joe’s YouTube channel to get the latest updates as they happen!