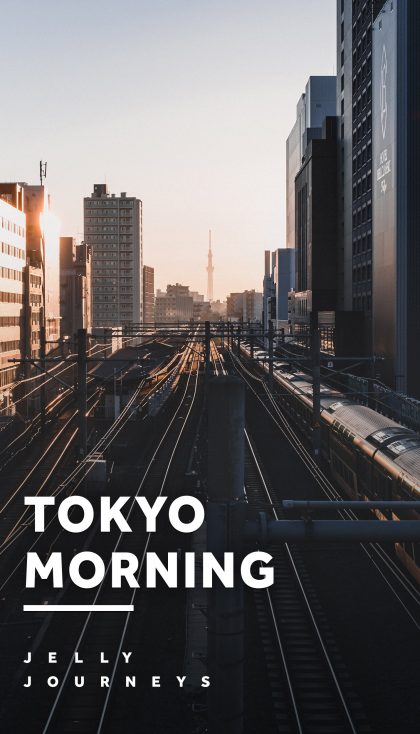 Back in Japan! Making the Most of Jet-lag

In February of this year, we visited Japan (again!) at pretty short notice. We had a few intentions in place for some specific video and photo content, as well as a few plans to scout some new business ideas for future work later this year.

We’ve now been back in the UK for about a 6 weeks and slowly ploughing through the thousands of photos taken and many hours of video footage. I had a plan to do a few specific photography vlogs for my YouTube channel and also a few creative videos of a slightly different nature to what I’ve made before.

Making the most of jet-lag

Considering I’m not a morning person, I was lucky to make the most of jet-lag and wake up naturally at about 6am for the first few mornings. I was keen to get straight into the city as early as possible and managed to achieve this consistently well throughout the first week. 10 morning points to me! 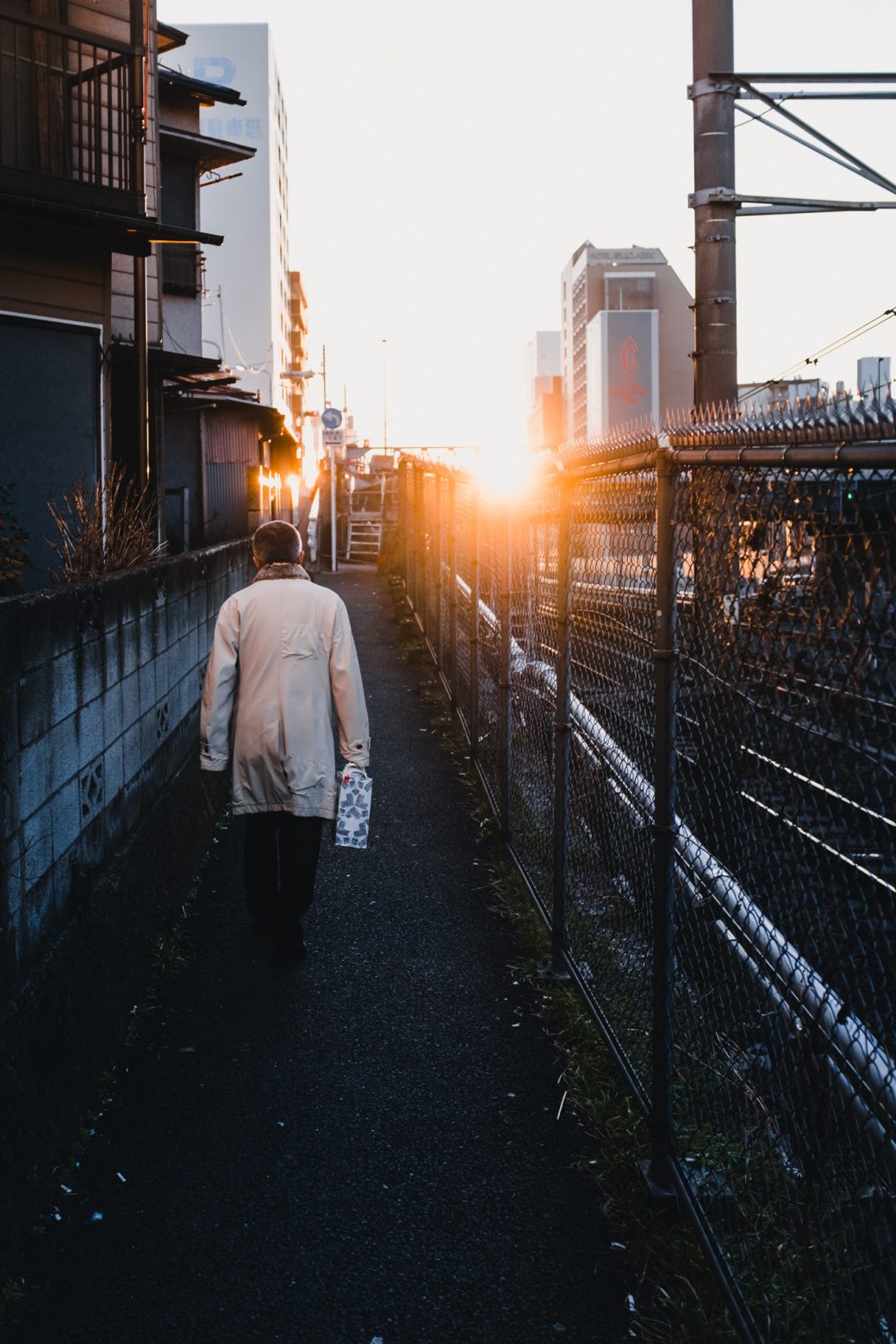 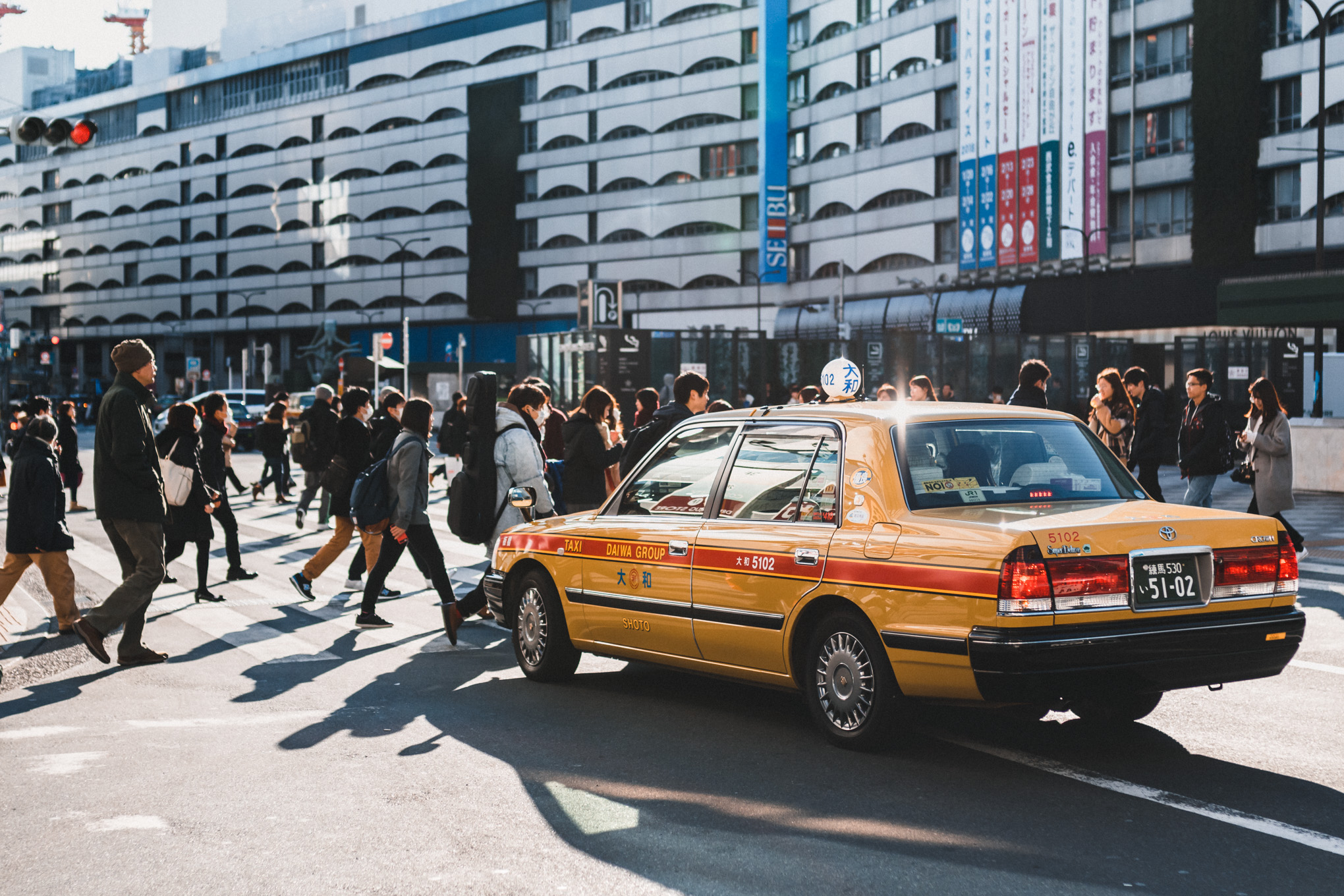 Our Airbnb was in Ikebukuro; a location we often choose for convenience to family and city connections. On the very first morning, I went for a wander along the train line towards Otsuka. I’ll admit, I didn’t actually realise how close it was, until looking on Google maps of where to walk. 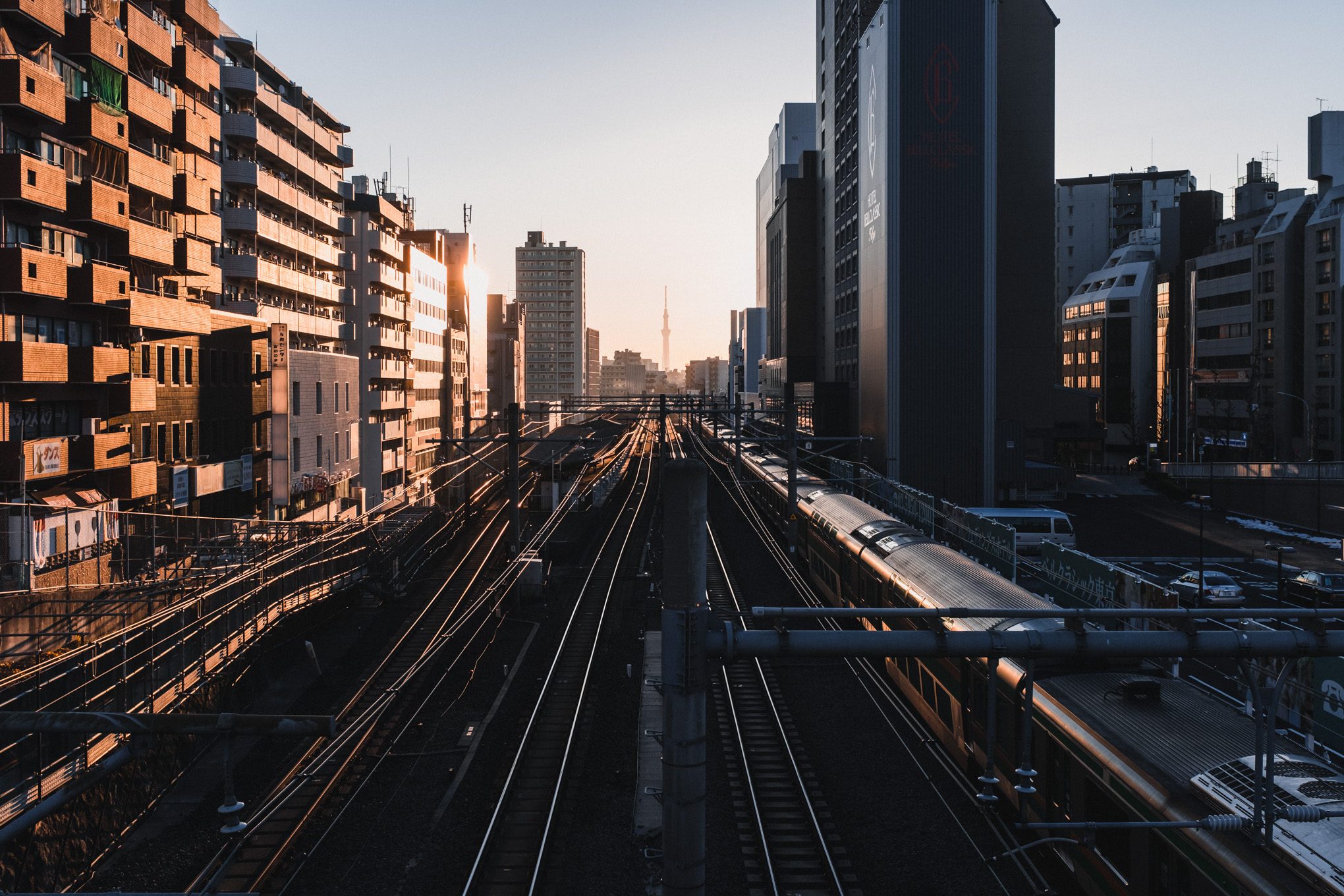 Right near Otsuka station, there’s a bridge crossing the train tracks offering an impressive view straight down to the Skytree in the distance. The added morning glow immediately got me back into the spirit of Japan and pumped for the two weeks to come!

Shinjuku is perhaps one of the craziest places in Tokyo. It’s a dense metropolis of huge buildings and (literally) millions of people. It’s a city in its own right and one of my favourite places in Japan! With multiple differences between the north, east, south and west, it was an obvious choice for one of my plans for capturing images during opposite times of the day.

This post aims to show a sense of the morning in Shinjuku, with a further post to come from Elly, showcasing the evening/nighttime.


On my third day in Japan, I got to Shinjuku right on sunrise, to explore some of the west side, before the morning commuter rush. Check out the video above and then continue on for some of the photos from that crisp morning! 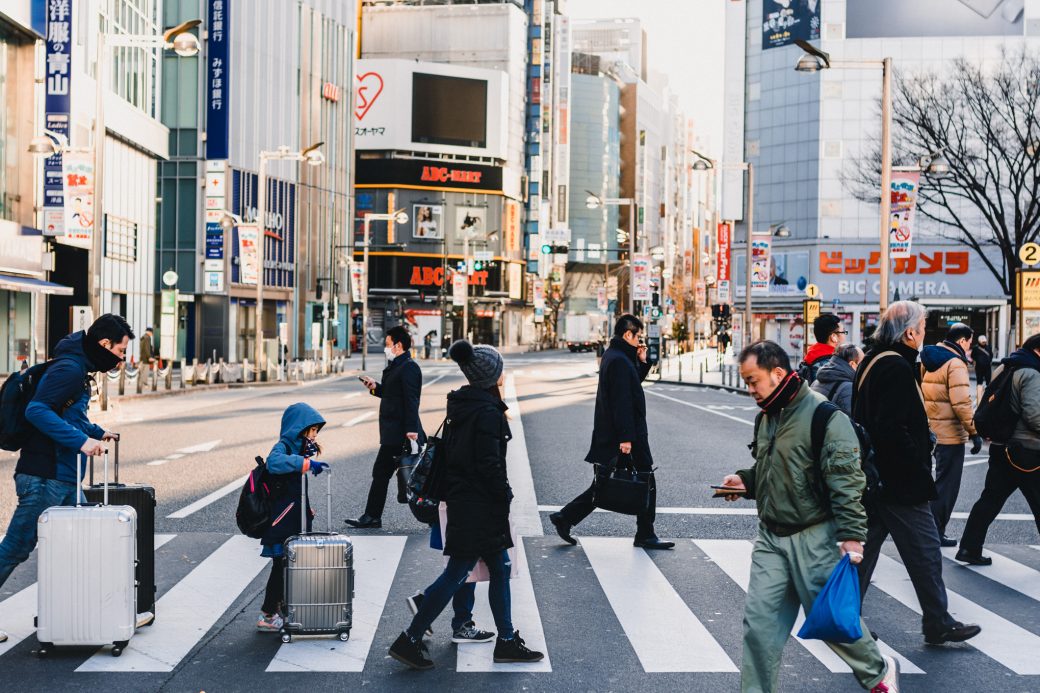 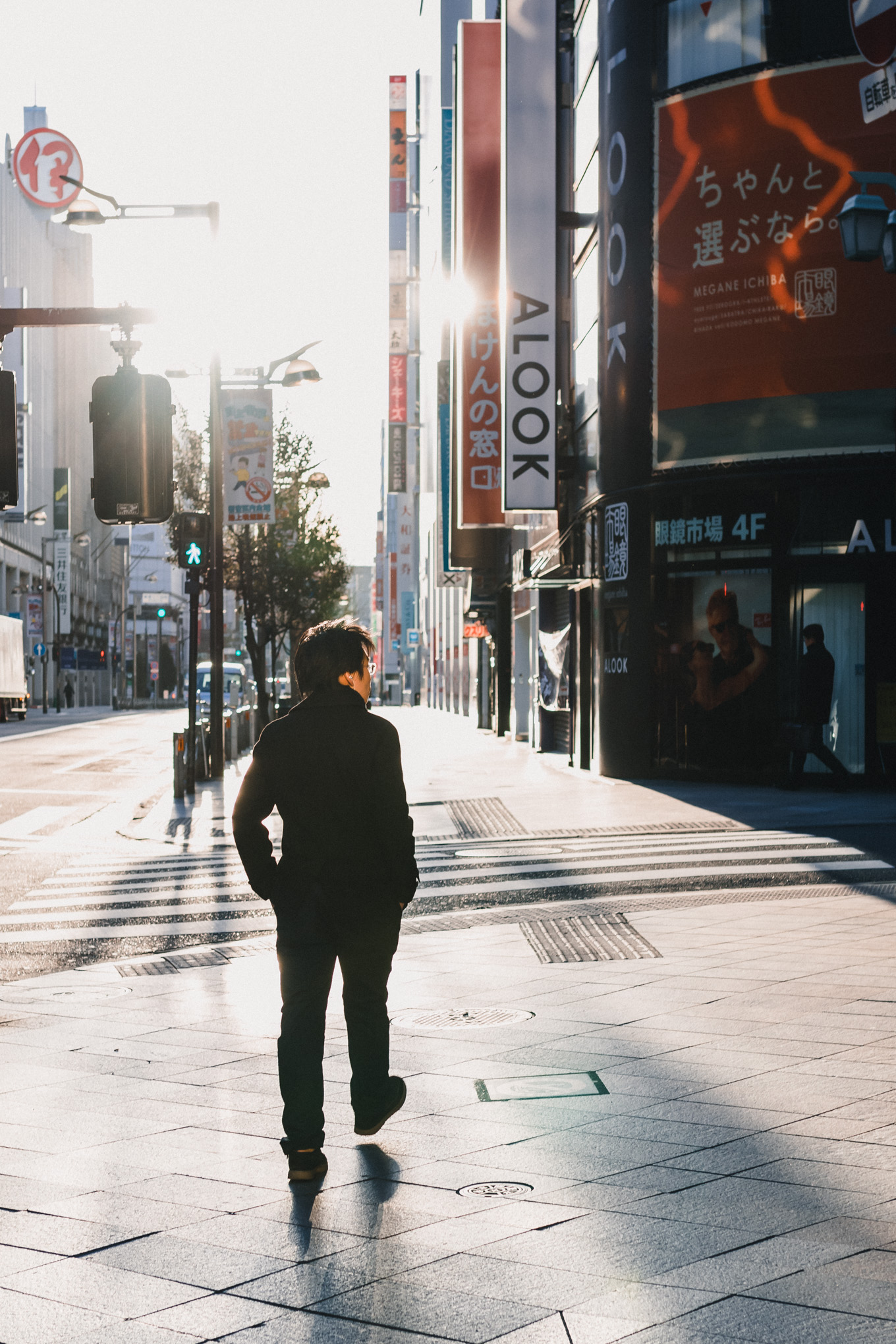 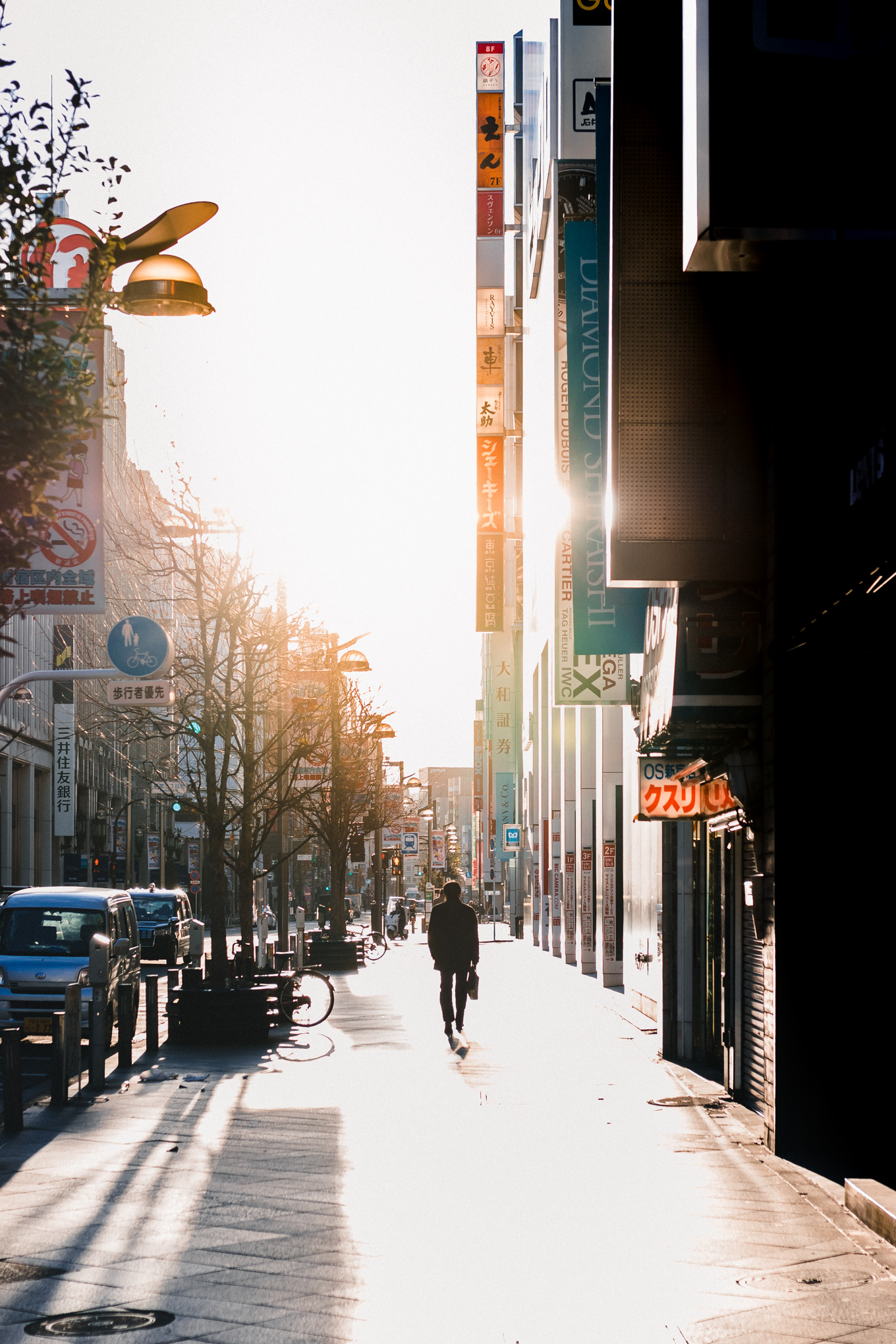 I’m always in awe at the shininess and bright scenes around Japan, but the early mornings in particular have a special kind of glow.

For this trip, I was also looking to change up my photography style slightly. I was hoping to try and focus more on finding areas of intense shadow among bright scenes. From this first morning’s shoot, I feel like I got myself off to a good start with this challenge! 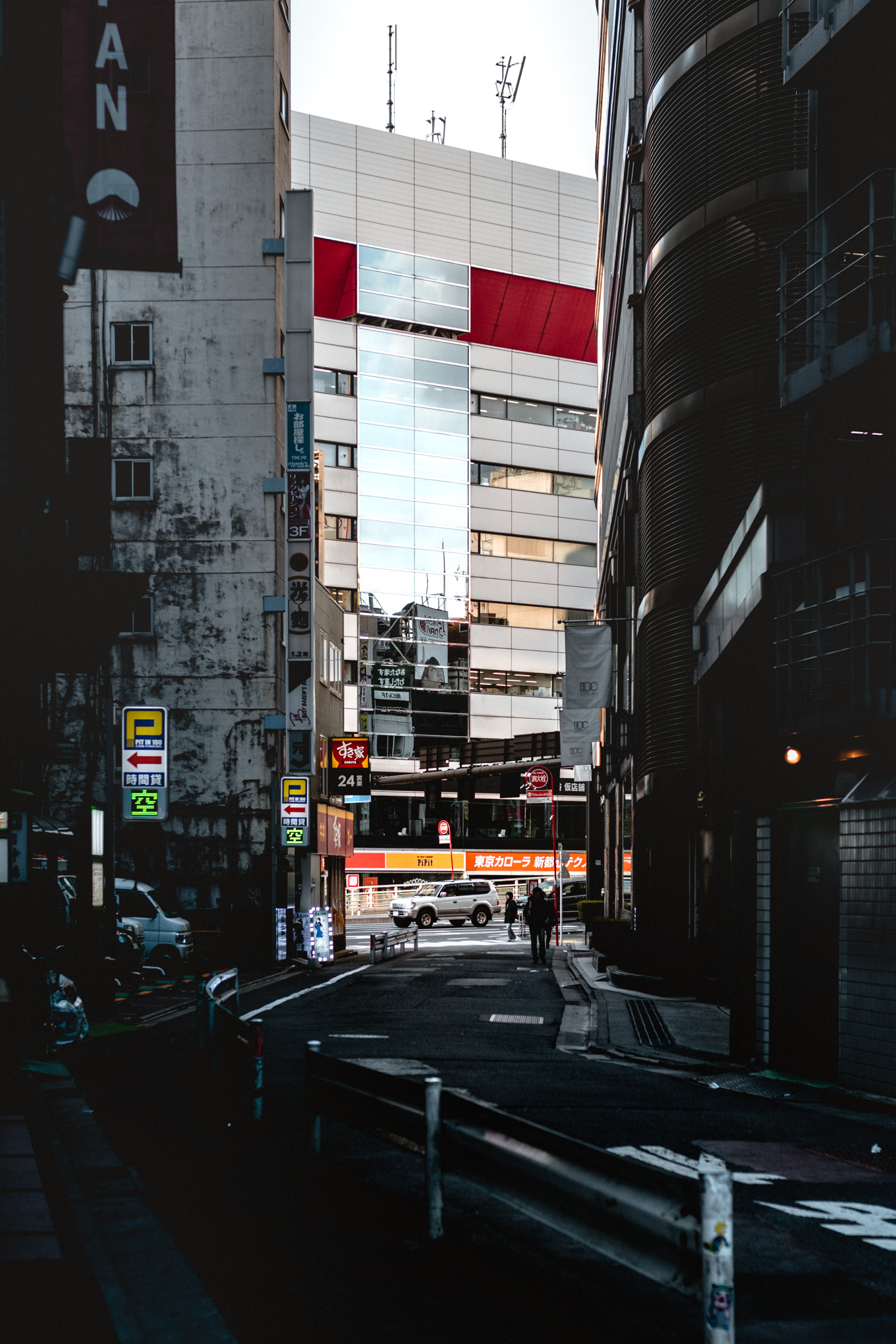 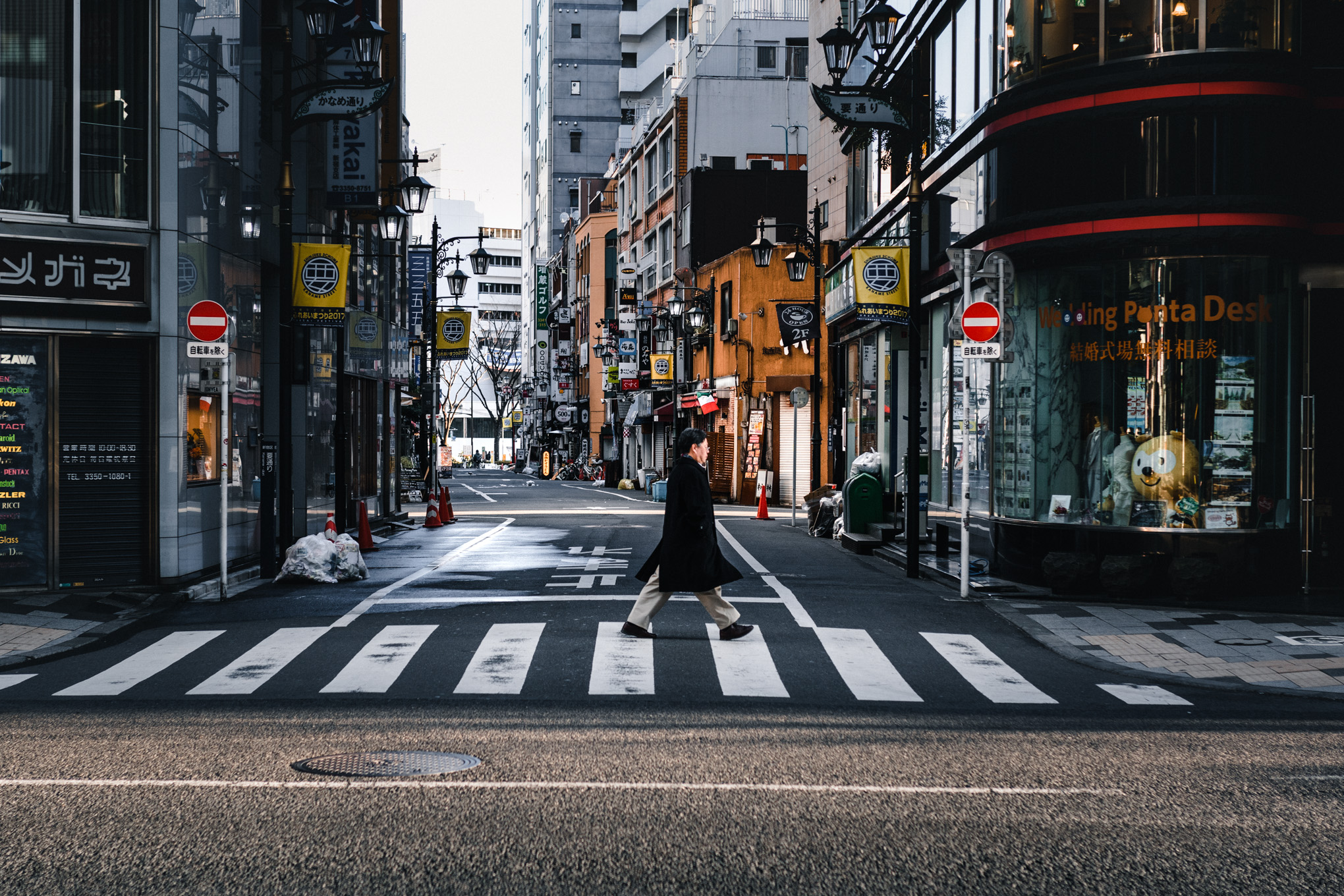 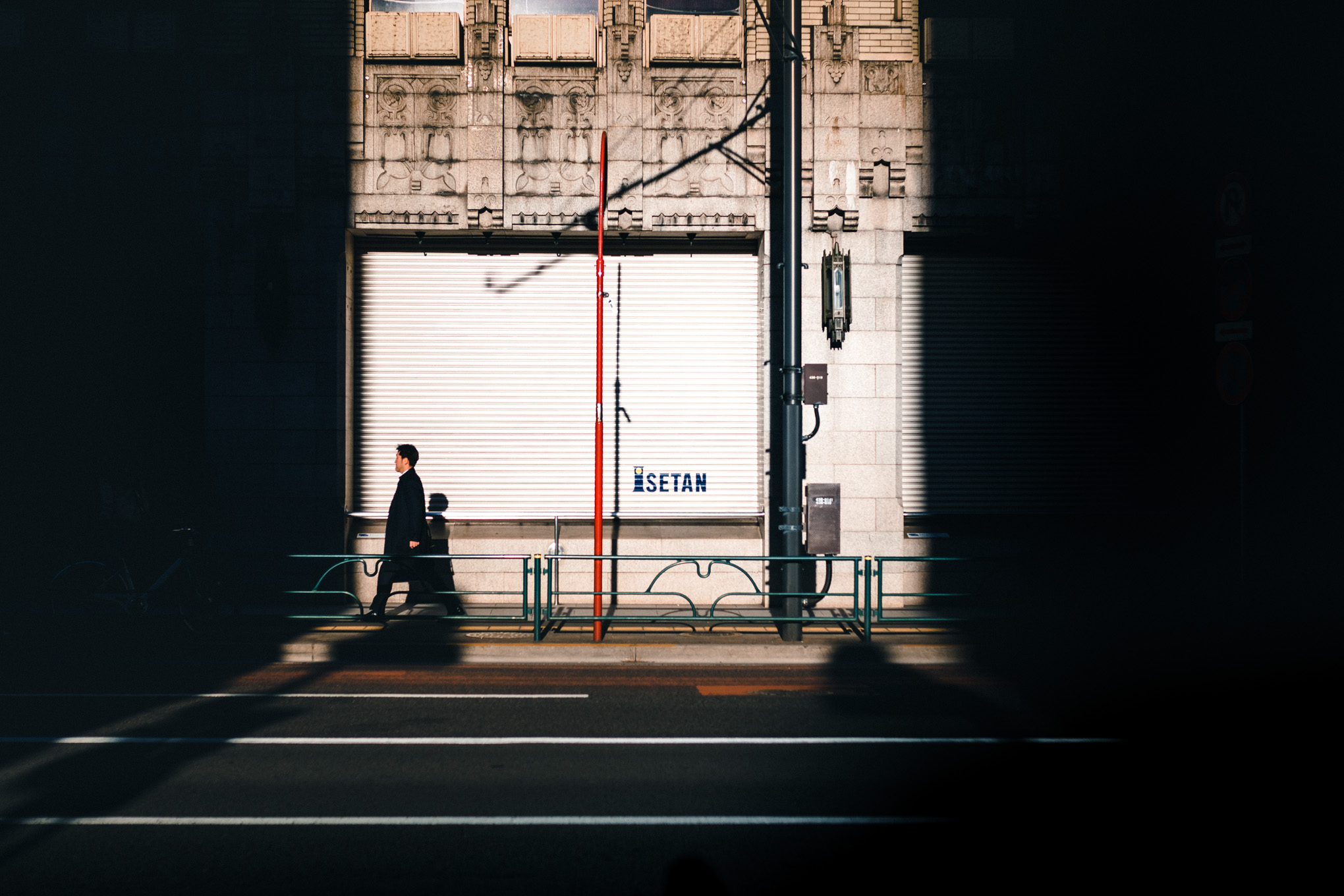 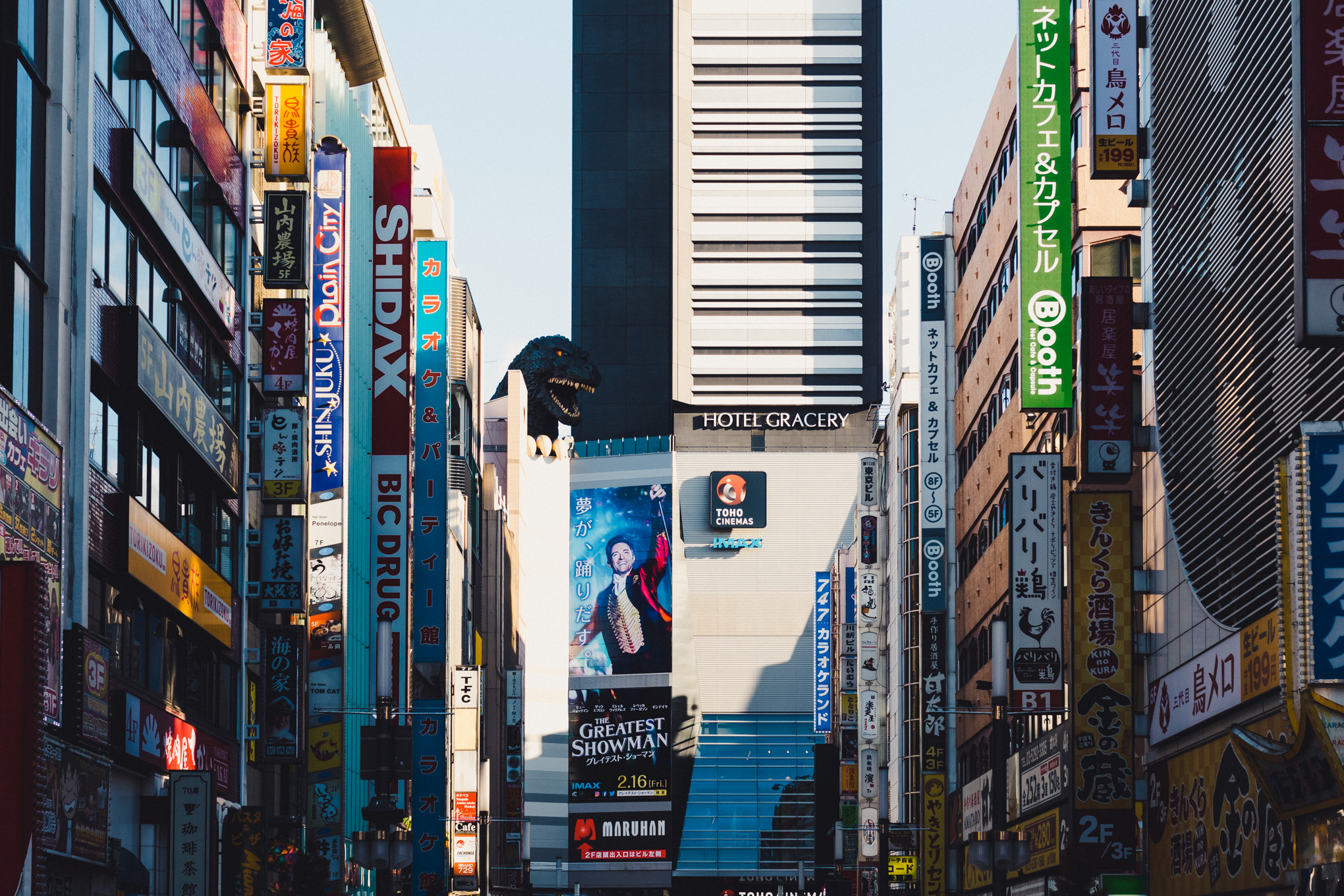 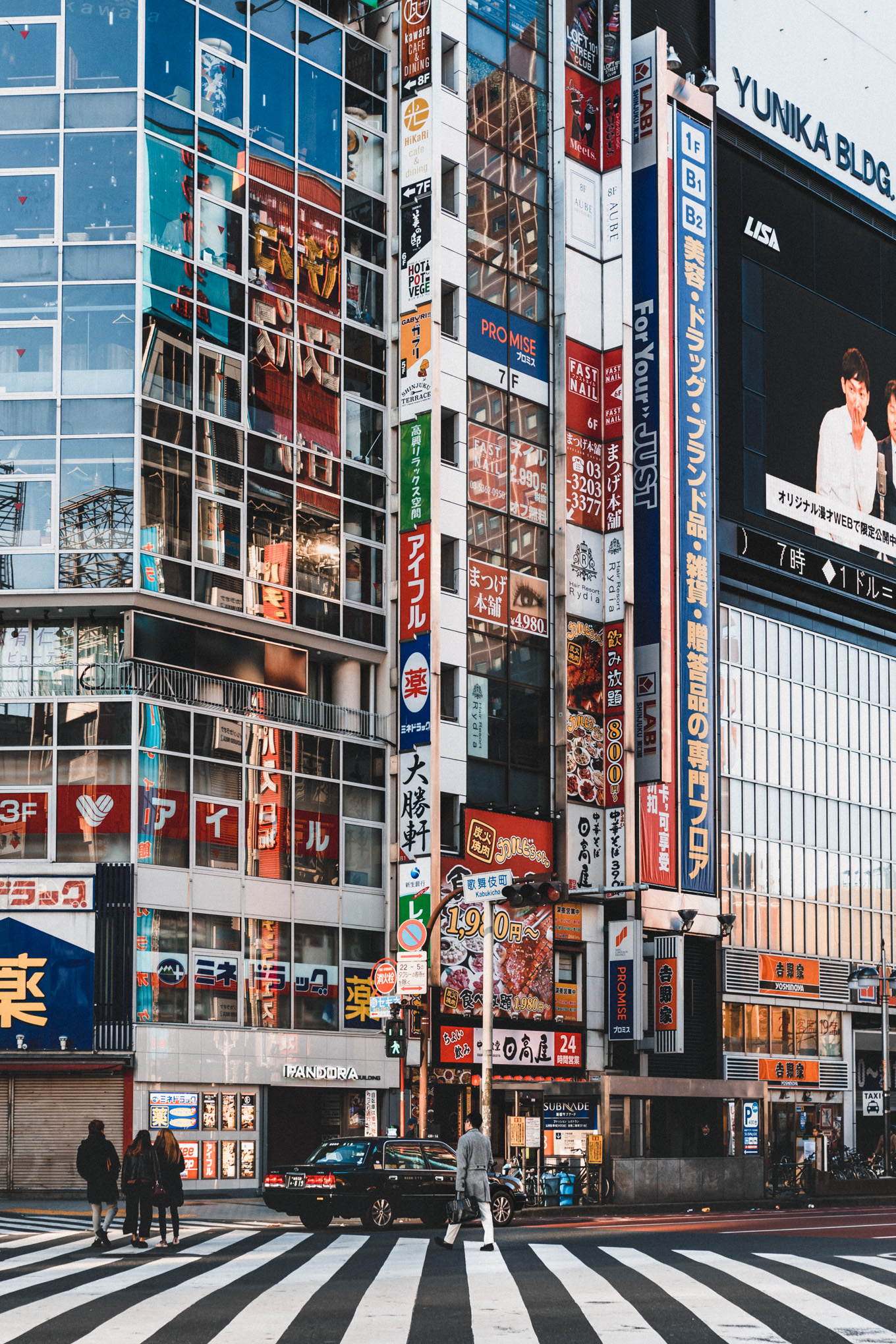 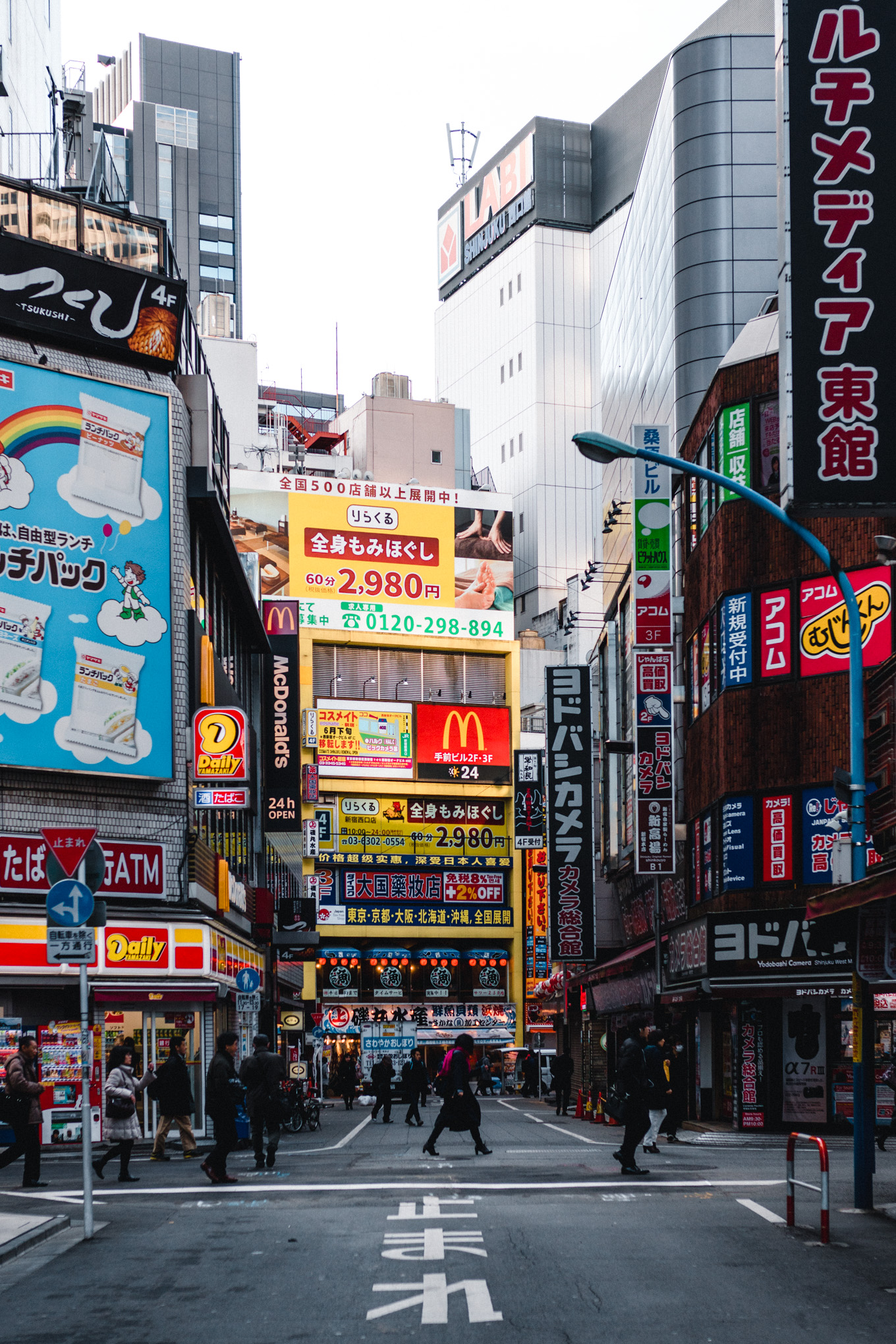 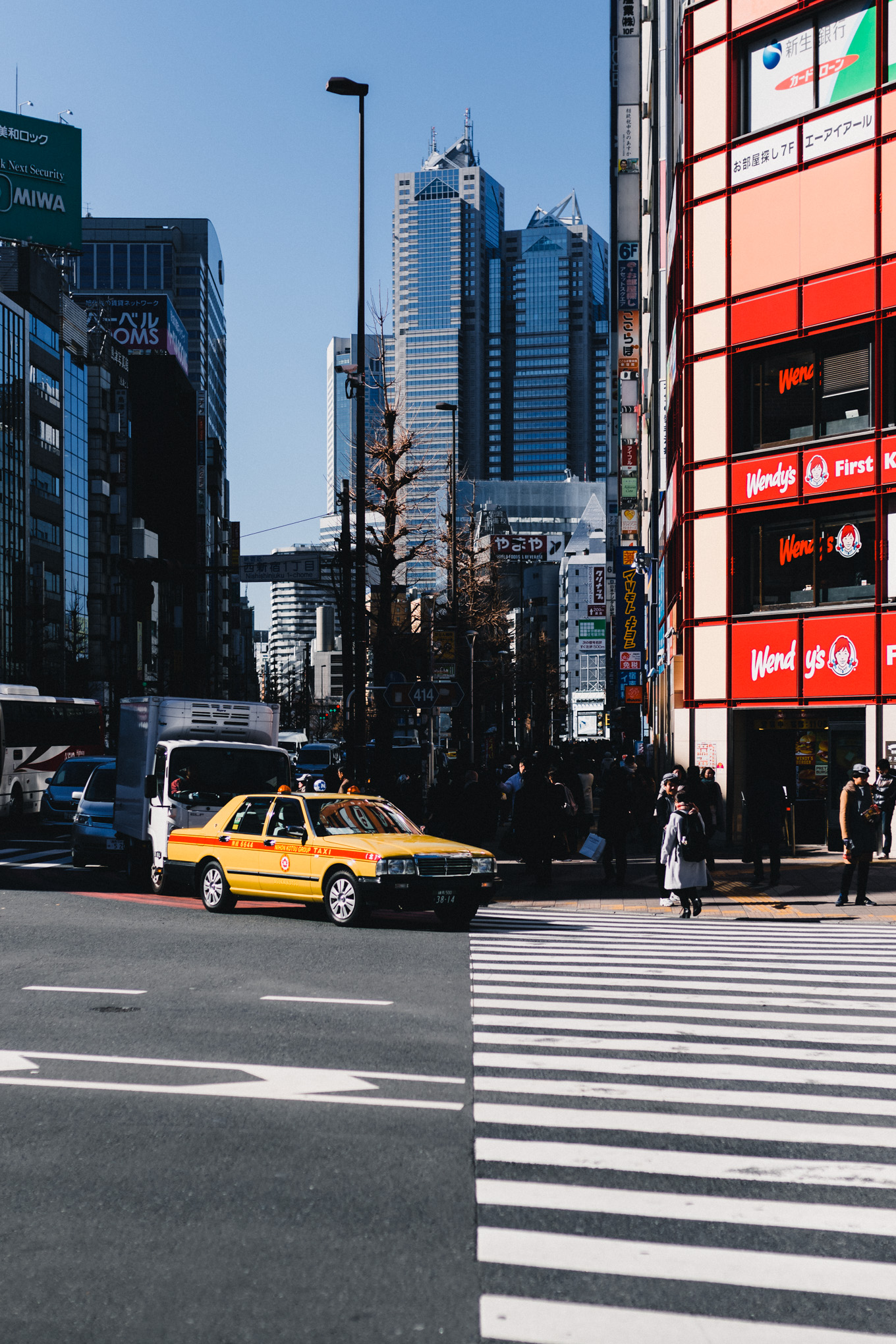 Ah, the good old vending machines of Japan. A trusty staple of practically every street corner in this completely convenient country. I spotted this row of vending machines with exceptionally well organised drinks. I think whoever stocked them, actively chose to arrange them by colour along the whole row.

As I stopped to take a shot of this row, I noticed this girl in the vibrant jacket ploughing coin after coin into one of the machines. A closer inspection revealed she was desperately trying to catch one of the special edition Pokémon drinks from a specific machine. At least she stayed there long enough for me to compose the shot! 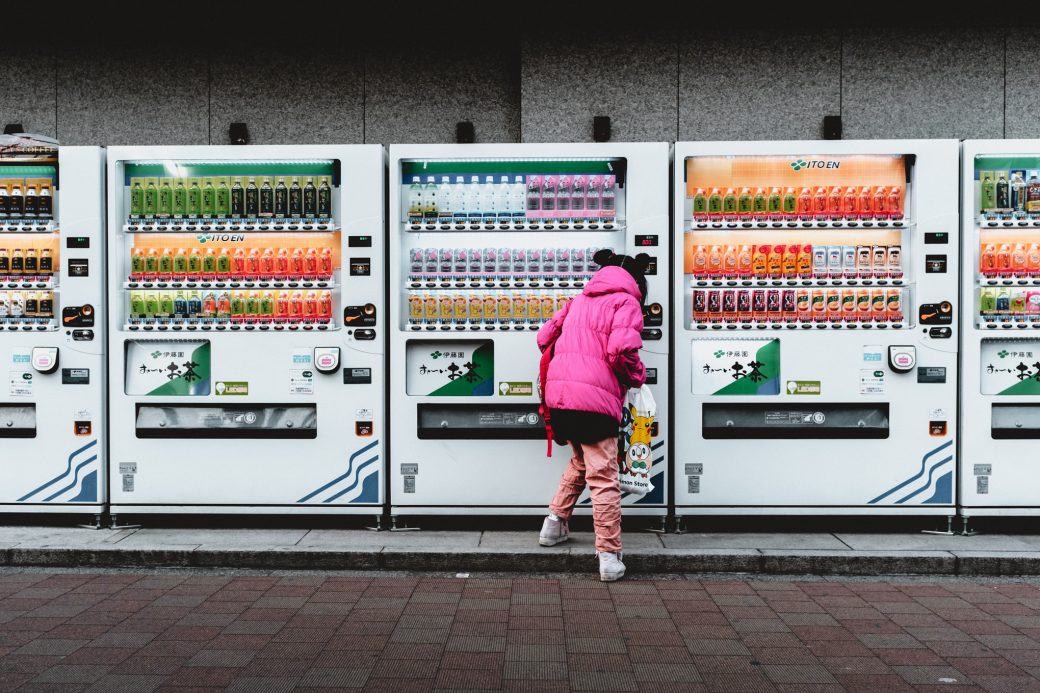 An interesting aspect to Japan is how ridiculously safe it is. Petty crime is hardly ever heard of and theft in particular is so heavily frowned upon culturally—as it should be—that it’s not uncommon to see people freely leaving their bikes unattended and unlocked.

In some ways it’s mind-blowing, but then at times you have to stop and think, “why shouldn’t it be like this?” 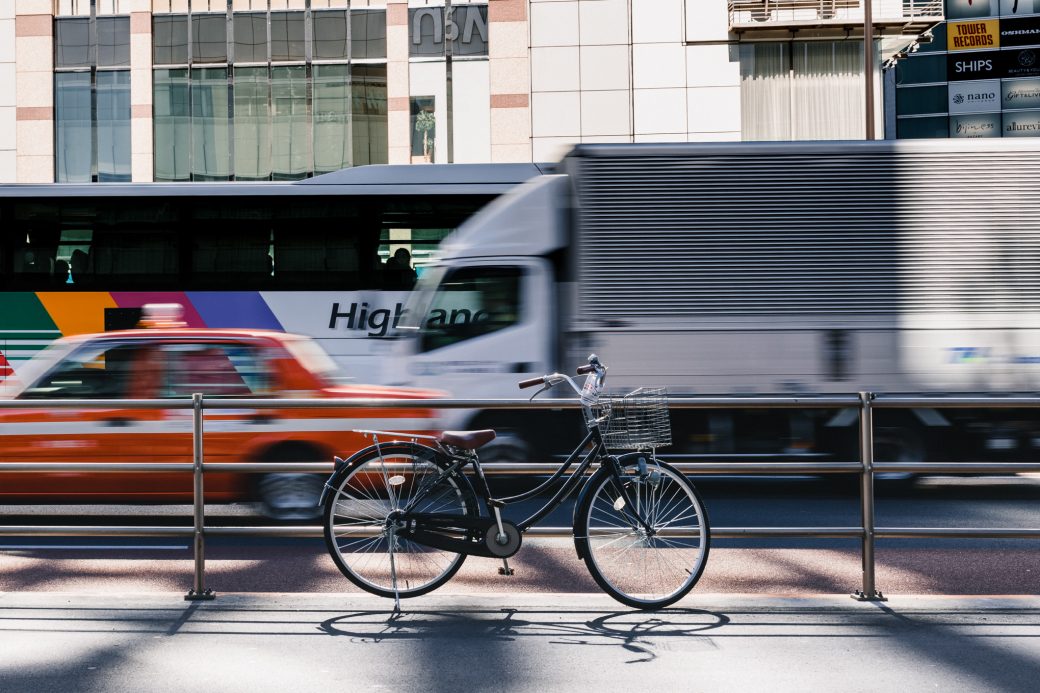 I’m always keen to find new viewpoints in Tokyo and on this morning through Shinjuku I noticed a little bit of greenery on top of the train station roof. After about 10 minutes wandering about, I managed to find the signs directing me to the public roof garden. From the top, there’s a few little viewpoints overlooking some areas of the city, including an overview of the many train lines that serve this hectic station. 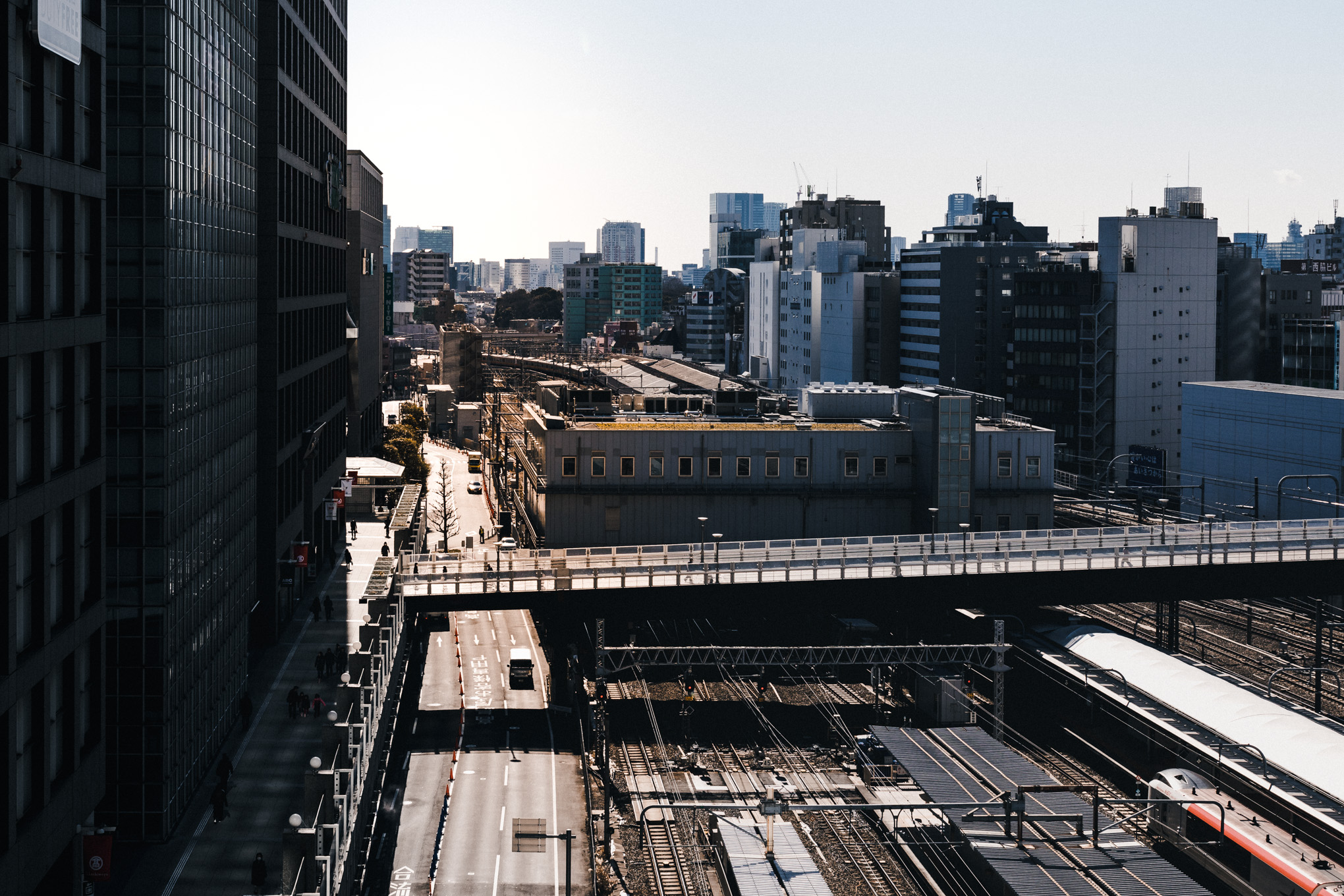 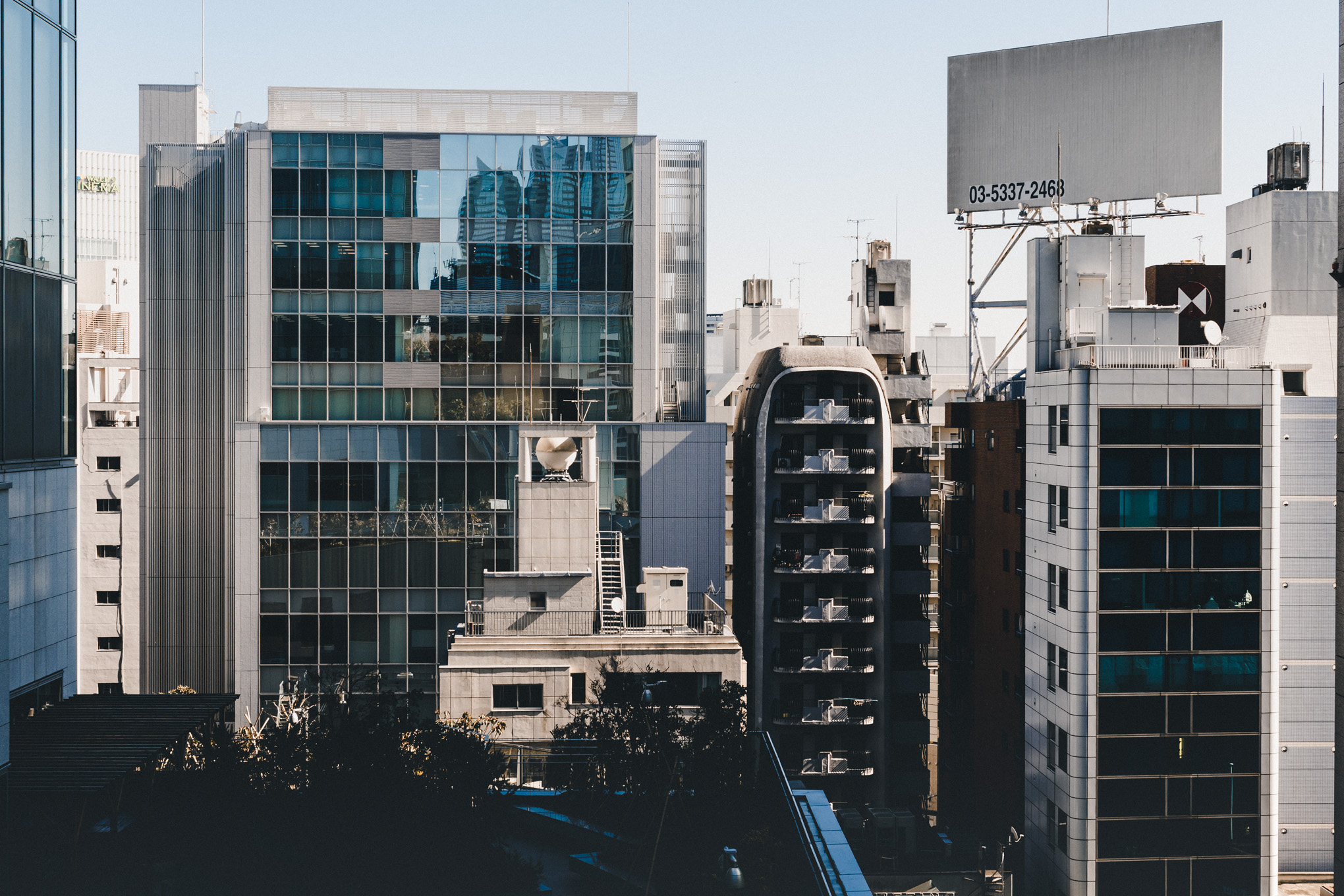 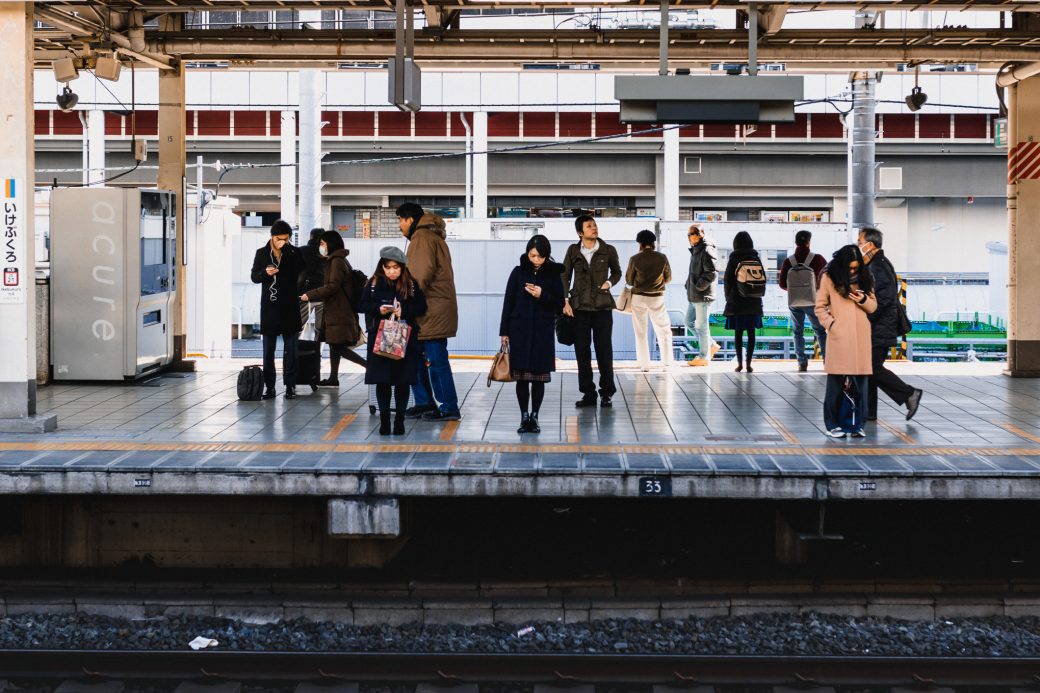 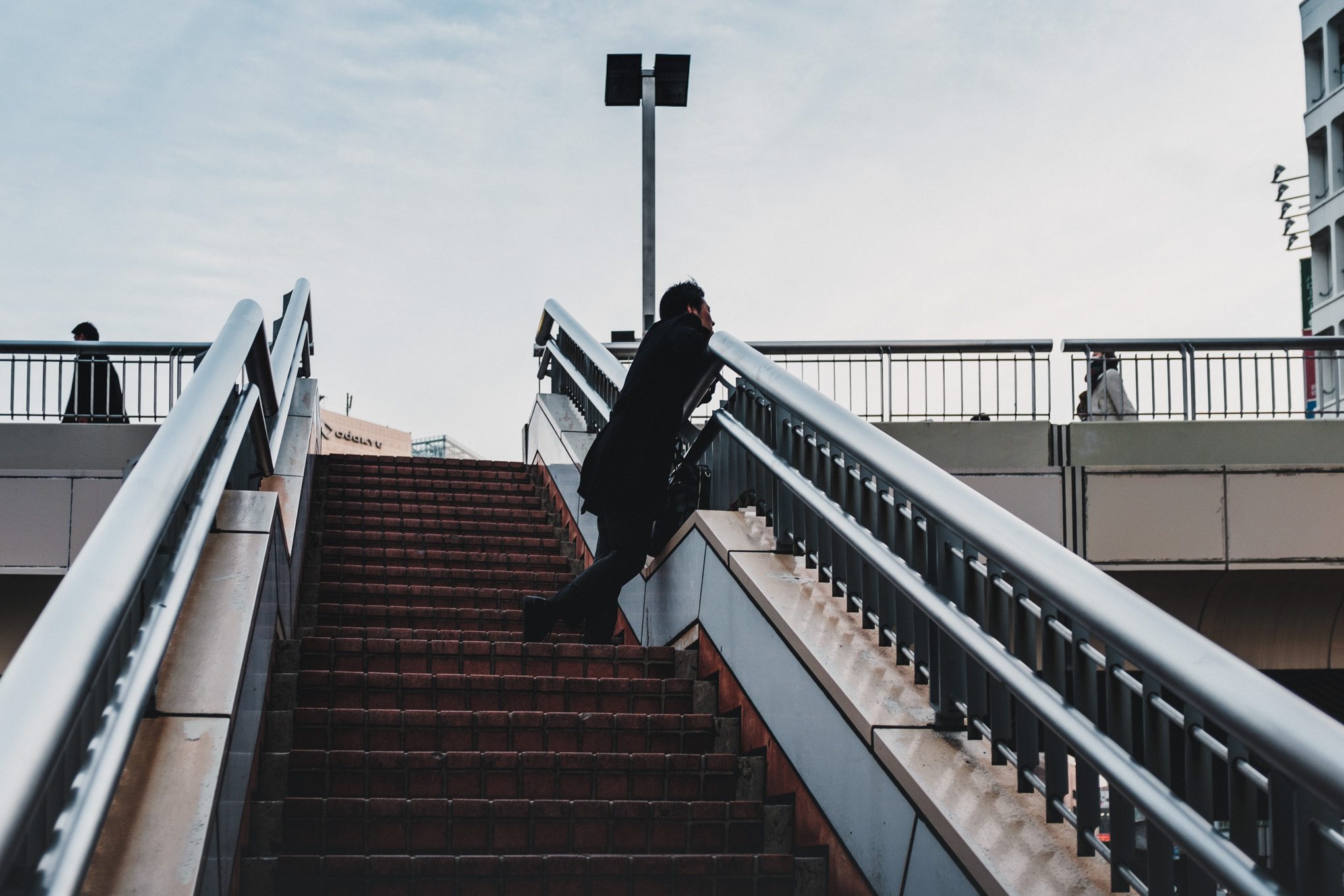 After about 4 hours wandering the streets of Shinjuku and the sun now high in the sky with harsh lighting all over, I decided to call it a day and head back to my Airbnb in Ikebukuro. I snapped this last shot from round the corner of where I was staying and was surprised no one noticed it wasn’t Shinjuku in the comments on my vlog.

But then again, Tokyo is so massive, you couldn’t possibly recognise every alleyway in the city! 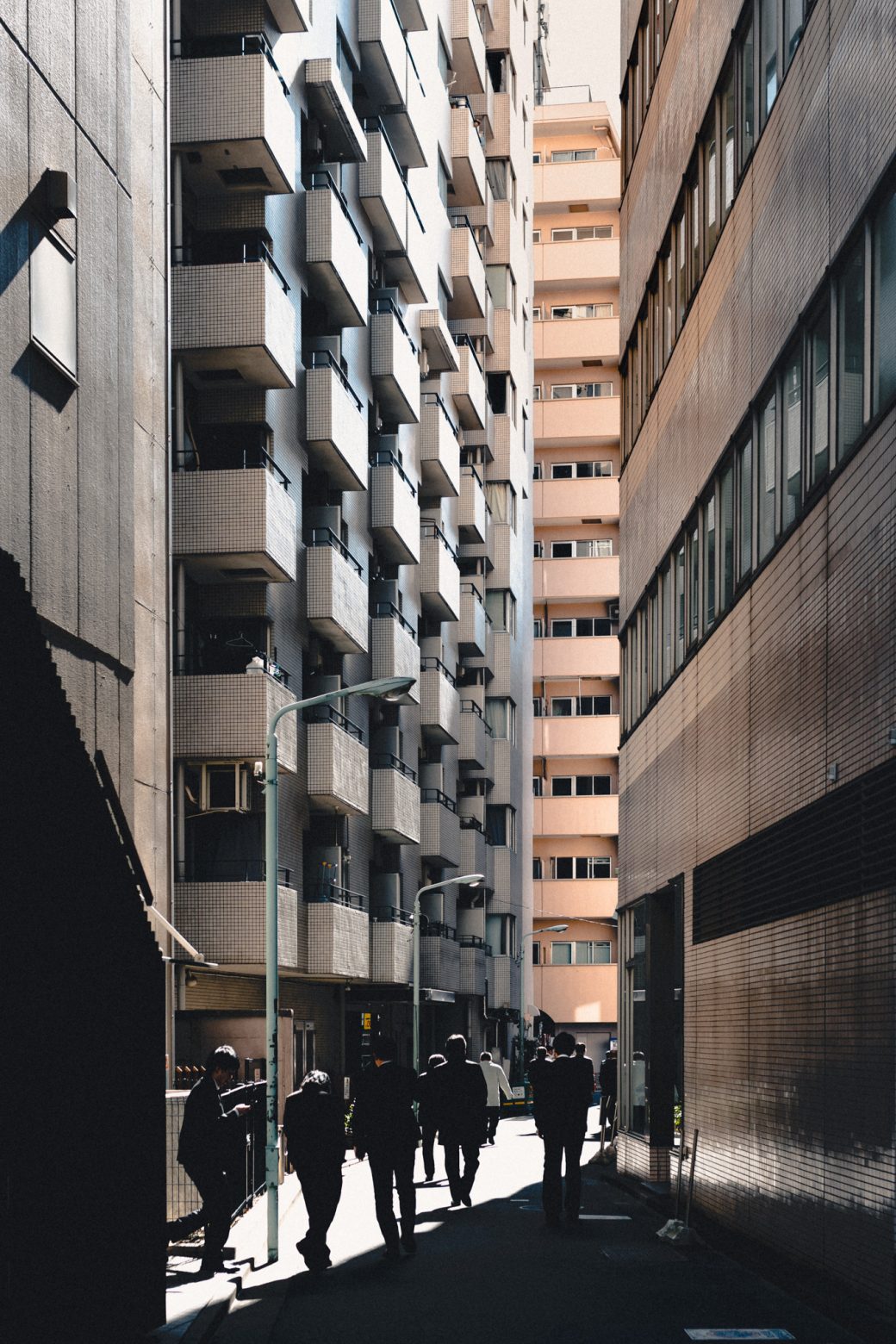 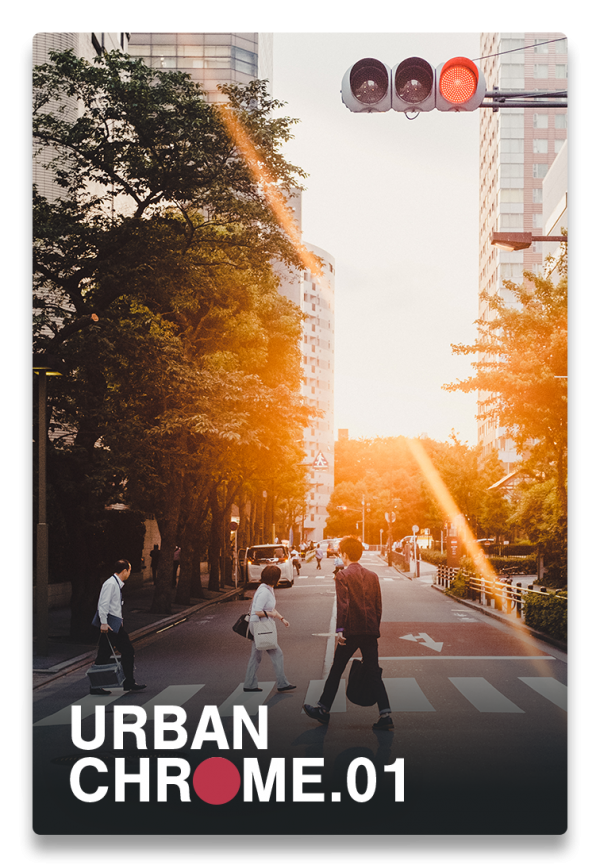 Edit your photos with a unique style via this collection of 25 bespoke Lightroom presets, inspired by the urban life of Japan. 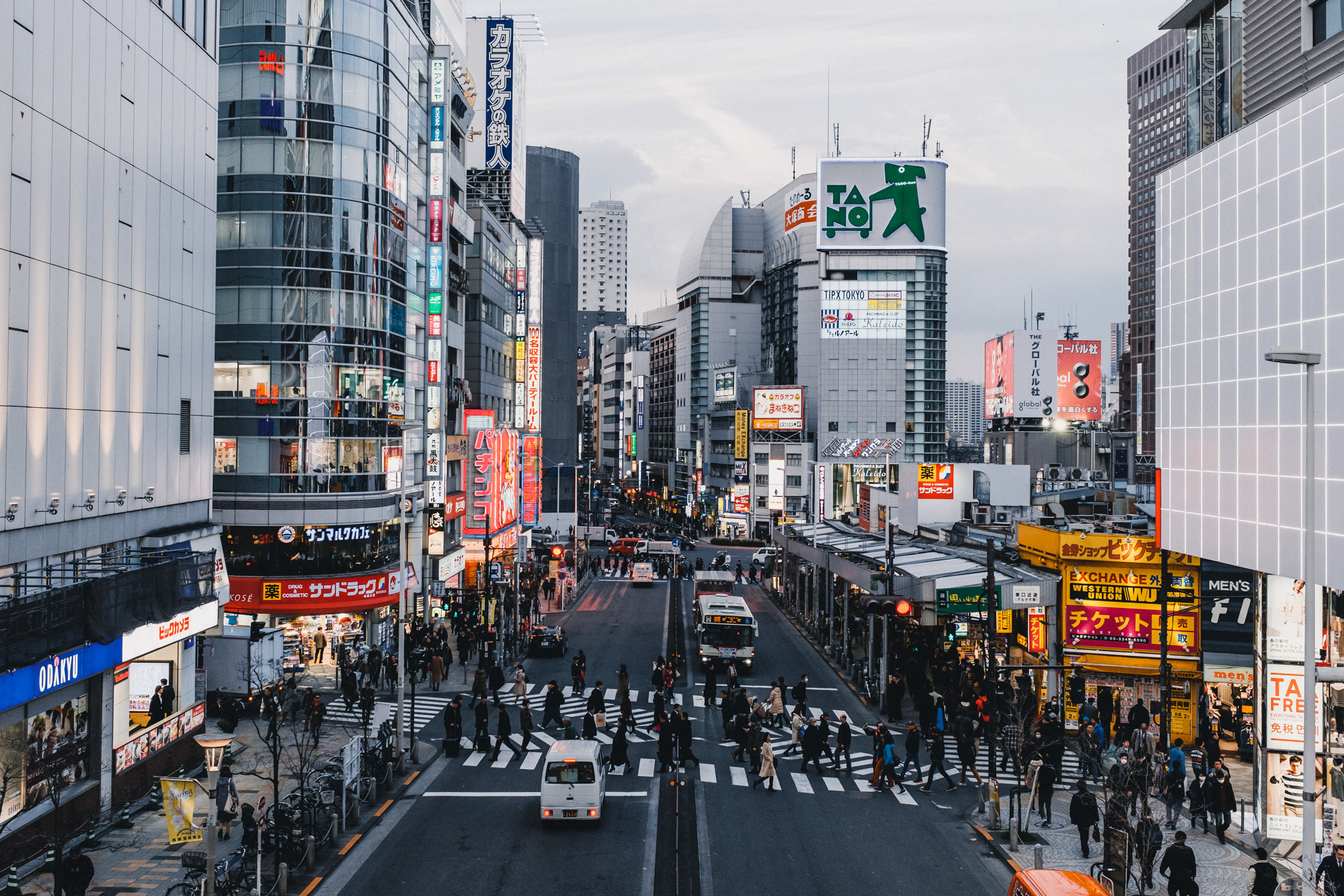 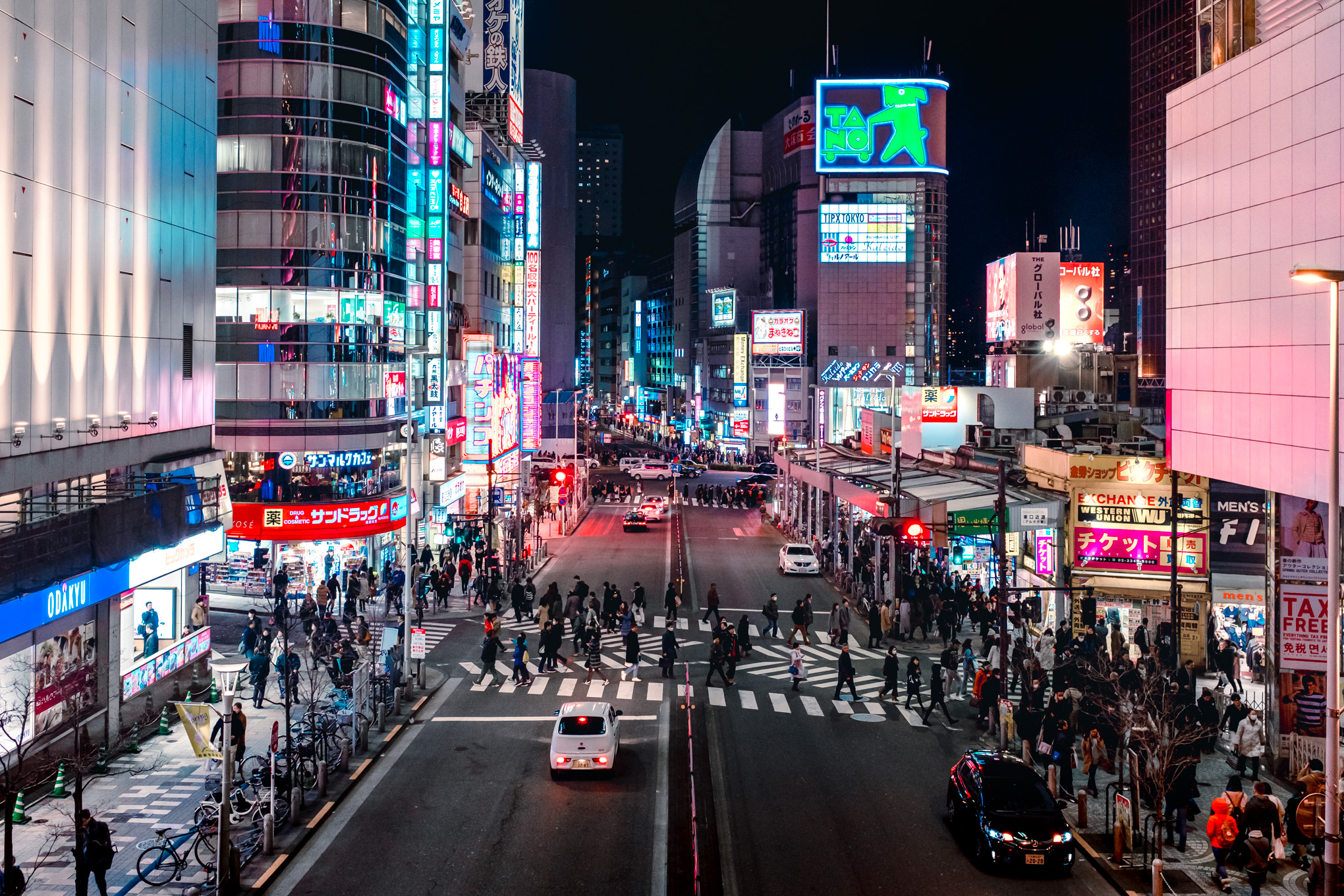 I hope you enjoyed the photos and the vlog in this post! Keep an eye out for our nighttime Shinjuku post where I’m back with my trusty photography partner-in-crime, Elly—who definitely isn’t a morning person 🙄

We headed out to Shinjuku for about 8pm to catch some evening lights and nighttime activity. The vlog from that evening is possibly my favourite I’ve ever created. The opening shots and some of the sequences in the middle were so mesmerising at the time of filming, and even more so when editing after. It really is a culmination of the direction I want to take my YouTube channel, coupled with better planning and more time to film — I really hope you enjoy it as much as I do!

I hope you enjoyed this post! Make sure to check back here to see the latest content and subscribe/follow us on whichever channel suits you best: